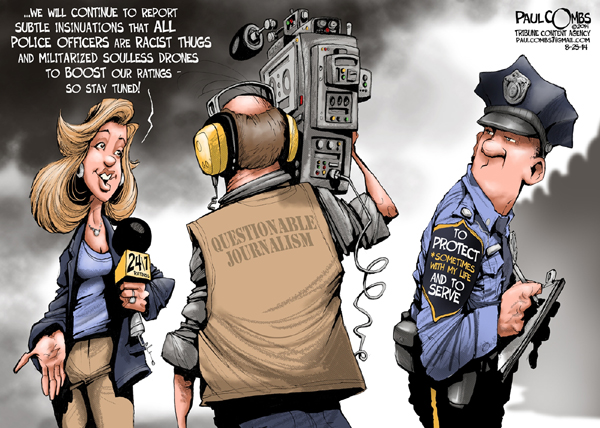 The media enthusiastically remind us that it's the first anniversary of the death of Ferguson's Michael Brown, a death that spawned the so-called Black Lives Matter movement.

In a September speech at the United Nations, President Barack Obama said, "The world also took notice of the small American city of Ferguson, Missouri — where a young man was killed, and a community was divided."

Never mind that both a grand jury and the federal Department of Justice exonerated the officer who shot and killed Brown. Never mind that neither the physical evidence nor eyewitness testimony corroborated the assertions that Brown had his hands up or that he said, "Don't shoot."

Never mind that cops, fearing false accusation of racial profiling and police brutality, are increasingly reluctant to engage in proactive policing — to look for suspicious activity in an effort to prevent crime. As a result crime has gone up, particularly in cities with high-profile cases of alleged racial profiling.

Call it the "Ferguson effect."

In New York City a black man, Eric Garner, was killed by police in 2014 as he resisted arrest. A grand jury found insufficient grounds to indict any of the officers involved. Still it became a cause celebre. In New York City, shootings rose 20 percent during the first half of 2015, compared to the previous year.

In Baltimore, Freddie Gray, a black man who resisted arrest, was placed in a police van, slipped into a coma shortly after arriving at the station and died a week later. Days of riots followed and six officers were indicted in connection with Gray's death. During the riots, Baltimore's mayor told the police, as she put it, to give "those who wished to destroy space to do that." Cops got the message. As in New York, they backed off, doing little more than responding to radio calls — no more proactive policing. As a result, Baltimore is experiencing crime levels unseen in decades. Murders have increased 48 percent in the first six months of 2015 — with most of the homicides occurring after Freddie Gray's April 19 death.

Never mind, according to the Centers for Disease Control, police shootings of blacks are down almost 75 percent over the last 45 years, while police shooting of whites remained level. And never mind that the media engages in selective concern.

In Tennessee, Memphis police Officer Sean Bolton approached an illegally parked car, apparently interrupting a drug deal that was taking place inside. The car's passenger got out, engaged Bolton in a physical struggle and shot the officer multiple times. Bolton, a 33-year-old Marine vet who served in Iraq, died at the hospital. After a two-day manhunt, the murder suspect, on a supervised release following a bank robbery conviction, turned himself in.

In Louisiana, Shreveport Officer Thomas LaValley was dispatched to investigate a potential prowler, an armed man reportedly threatening a family member inside a house. When LaValley arrived, he was shot multiple times, and pronounced dead at the hospital. The alleged shooter, wanted on an attempted second-degree murder charge for a shooting three weeks earlier, was captured the next day.

In South Carolina, an unarmed teenager was shot and killed by a cop. Zachary Hammond, 19, was out on a first date when he was fatally shot by a Seneca police officer during a drug bust. His date, who was eating an ice cream cone at the time of the shooting, was later arrested and charged with possession of 10 grams of marijuana. The shooting is under investigation. But the police claim Hammond was driving his car toward the police officer who was attempting to make the stop, an act that resulted in the officer firing two shots, striking Hammond in the shoulder and torso.

The Hammond family wonders why so little national attention has been focused on their son's death. "It's sad, but I think the reason is, unfortunately, the media and our government officials have treated the death of an unarmed white teenager differently than they would have if this were a death of an unarmed black teen," said Eric Bland, the family's attorney. "The hypocrisy that has been shown toward this is really disconcerting. The issue should never be what is the color of the victim. The issue should be: Why was an unarmed teen gunned down in a situation where deadly force was not even justified?"

Why no national outcry? Simple. To the media only the lives of black suspects matter.