After Trump's 'Racist' Tweets, Dems Demand 'Civility,' But When Have They Practiced It? 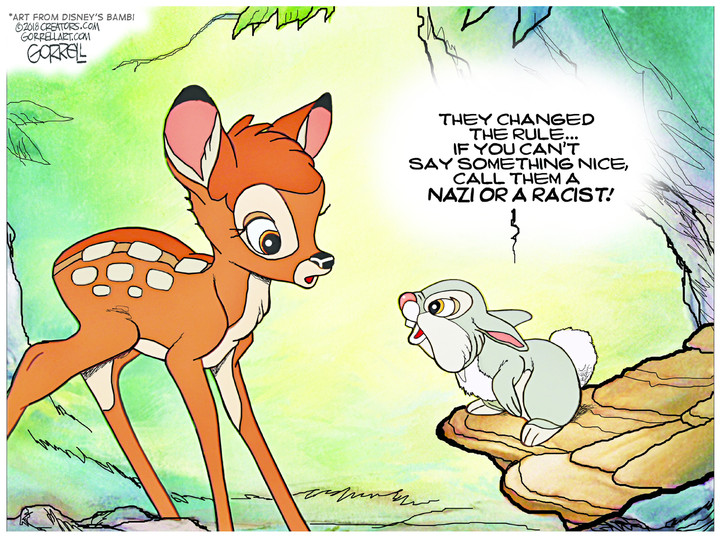 President Donald Trump, in a series of tweets, offered four freshman Democratic congresswomen a suggestion. Given their complaints about America and about Israel, tweeted Trump, the four, aka "the Squad" should "go back and help fix the totally broken and crime infested places from which they came."

Of the four, only Rep. Ilhan Omar, D-Minn., is foreign-born. How dare Trump, critics cried, tell these American-born citizens, all of whom are "people of color," to go back to where they came from! Racism! Never mind that in 2015, one of the four, then-citizen and now Rep. Rashida Tlaib, D-Mich., angrily tweeted about candidate Trump's criticism of immigration from Muslim countries. She wrote: "Deport this a—hole!" Did Tlaib tell an American, born in New York, to go back home?

Still, Trump's "racist" tweets provided Democrats their latest opportunity to pronounce Trump "racist" and to again urge a "restoration of civility." After all, Democrats and "civility" go hand in hand:

"The stench of fascism is in the air." — California Democratic Gov. Pat Brown, 1964, when Barry Goldwater accepted the Republican nomination.

"I am scared that if Ronald Reagan gets into office, we are going to see more of the Ku Klux Klan and a resurgence of the Nazi Party." — Coretta Scott King, 1980.

"I believe (George H.W. Bush) is a racist for many, many reasons. ... (He's) a mean-spirited man who has no care or concern about what happens to the African American community. ... I truly believe that." — Rep. Maxine Waters, D-Calif., 1992.

The new Republican-controlled House is like "the Duma and the Reichstag," (referring to the legislature set up by Czar Nicholas II of Russia and the parliament of the German Weimar Republic that brought Hitler to power). — Rep. John Dingell, D-Mich., 1995.

The GOP has a "white boy attitude, (which means) 'I must exclude, denigrate and leave behind.' They don't see it or think about it. It's a culture." — Donna Brazile, Al Gore's presidential campaign manager, 1999.

"The Republicans bring out Colin Powell and J.C. Watts because they have no program, no policy. ... They'd rather take pictures with black children than feed them." — Brazile, 2000.

"We are in danger. The extreme right wing has seized the government. ... So look out. ... The right-wing media, the FBI — they are targeting our leadership." — Rev. Jesse Jackson, 2001.

"What we are dealing with right now in this country is whether we are having a kind of bloodless, silent coup. ... President (George W. Bush) is trying to bring to himself all the power to become an emperor — to create Empire America." — Rep. Jim McDermott, D-Wash., 2002.

"Every day, (those in George W. Bush's administration) unleash squadrons of digital brownshirts to harass and hector any journalist who is critical of the President." — Al Gore, 2005.

Democrats vs. Republicans is "a struggle between good and evil. And we're the good." — Gov. Howard Dean, chairman of the Democratic National Committee, 2005.

George W. Bush has "improve(d) on the techniques used by the Nazi and communist propaganda machines." — George Soros, 2006.

George W. Bush's administration engaged in "ethnic cleansing by inaction. ... So by simply not doing anything to alleviate this ... they let the hurricane do the ethnic cleansing, and their hands are clean." — Rep. Barney Frank, D-Mass., about Bush's allegedly sluggish response to Hurricane Katrina's destruction in New Orleans, 2006.

"The Republican Party would have the American flag and the swastika flying side by side." — Julian Bond, NAACP, 2006.

"The House of Representatives ... has been run like a plantation." — Hillary Clinton, 2006.

"Republicans ... want to literally drag us all the way back to Jim Crow laws." — Debbie Wasserman Schultz, DNC chair, 2011.

"Some (Republicans) believe that slavery isn't over, and they think they won the Civil War." — Rep. Rangel, 2014.

So, as to Democrats' demand for a restoration of "civility," a simple question: When have they practiced it?