It Is Time for 'Jexodus' 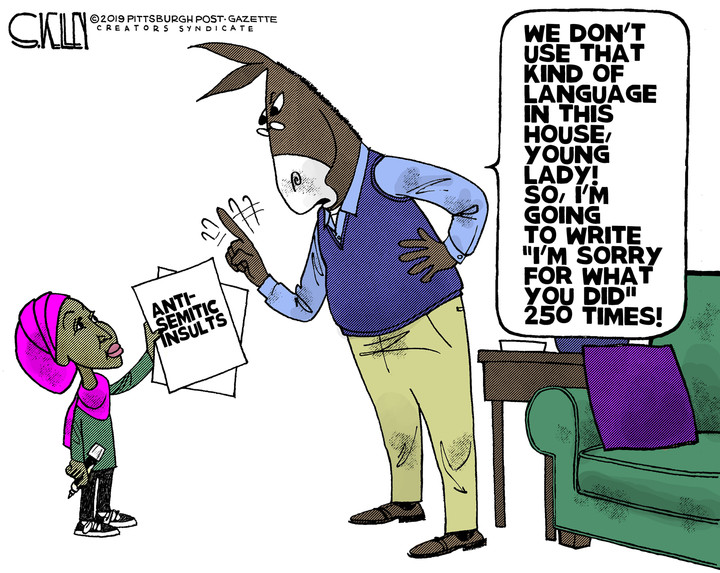 Democrats failed to pass a resolution specifically condemning freshman Rep. Ilhan Omar, D-Minn., a Muslim and naturalized citizen from Somalia, who recently made several comments considered anti-Semitic. She tweeted that American politicians support Israel because "it's all about the Benjamins," meaning Jews essentially offer bribes for political support. She accused politicians who support Israel of dual loyalty, recently explaining, "I want to talk about the political influence in this country that says it is okay to push for allegiance to a foreign country." In 2012, she tweeted, "Israel has hypnotized the world, may Allah awaken the people and help them see the evil doings of Israel."

Following Omar's "Benjamins" tweet, the Anti-Defamation League's national director and CEO, Jonathan Greenblatt, issued the following statement: "As Americans and Jews, we expect our politicians to condemn bigotry, not to fuel it. Words matter. At a time when anti-Semitism is on the rise in the U.S. and abroad, Rep. Omar is promoting the ugly, anti-Semitic conspiracy theory that Jews have an outsized influence over politics. The notion that wealthy Jews are controlling the government is a longstanding anti-Semitic trope and one of the pillars of modern anti-Semitism, a retread of ideas spread by bigots from David Duke to Louis Farrakhan."

Omar, fellow freshman Rep. Rashida Tlaib, D-Mich., and Sen. Bernie Sanders, D-Vt., are the only members of Congress to publicly support the Boycott, Divestment and Sanctions movement, which "works to end international support for Israel's oppression of Palestinians and pressure Israel to comply with international law." Criticism of Israel and anti-Semitism are, of course, not necessarily the same thing. But Omar pushes a stereotype that Jews have a dark, even sinister effect on the political process.

Jewish bigotry from black liberals — and Omar is black — has long been an unspoken problem among Democrats. According to an annual survey commissioned by the ADL, their latest 2017 report found that blacks — who vote 90 percent for Democrats — were 2.3 times more likely than whites to be anti-Semitic. By contrast, polls show that Jews, among various demographic groups, are the least likely to be racist against blacks. Consider:

The Rev. Jesse Jackson, when running for president in 1984, referred to Jews as "Hymie" and New York City as "Hymietown."

Louis Farrakhan of the Nation of Islam, who once posed with then-Sen. Barack Obama in a photograph (helpfully not released until after President Obama left office), called Judaism a "gutter religion," praised Hitler as "a great man" and recently said: "When they call me an anti-Semite — stop it. I'm anti-termite."

The Rev. Al Sharpton, whose endorsement is being sought by 2020 Democratic presidential hopefuls, referred to Jews as "diamond merchants" and helped fuel a 1991 riot between blacks and Jews in the Crown Heights area of Brooklyn, New York.

Rep. Cynthia McKinney, D-Ga., a critic of American support of Israel, served two stints in Congress, from 1997 to 2003 and then from 2005 to 2007. Her father, a state representative for Atlanta, was asked on television, days before his daughter was defeated in a 2002 primary, why she faced such intense opposition. He said: "That ain't nothing. Jews have bought everybody. Jews. J. E. W. S."

Civil rights icon Andrew Young became a spokesperson for Walmart. In defending against the charge that Walmart displaces mom-and-pop stores, Young said: "Mom-and-pop stores ... are the people who have been overcharging us — selling us stale bread and bad meat and wilted vegetables. And they sold out and moved to Florida. I think they've ripped off our communities enough. First it was Jews, then it was Koreans and now it's Arabs; very few black people own these stores." He apologized, but Walmart and Young soon ended their relationship.

Even Jews who do not support many Israeli policies nevertheless support the state of Israel. A recent poll by the Jewish Electorate Institute found 92 percent of American Jews are "generally pro-Israel," even as 59 percent say they are comfortable supporting Israel and also criticizing its government. But support for Israel is down among Democrats, particularly young Democrats. A new Gallup poll found "liberal Democrats are only party/ideology group not partial to Israel" in the Mideast conflict. Young liberal Democrats are about as likely to support the Palestinians as they are Israel, with black support for Israel even lower. A recent Economist/YouGov poll that asked whether Israel is an American "ally" found that only 19 percent of blacks and 22 percent of Hispanics agreed.

Young blacks like Candace Owens of Turning Point USA urge blacks to divorce themselves from the Democratic Party. She calls this movement "Blexit." Can we expect a similar movement in which Jewish voters reconsider their traditional 70 percent support for the Democratic Party?