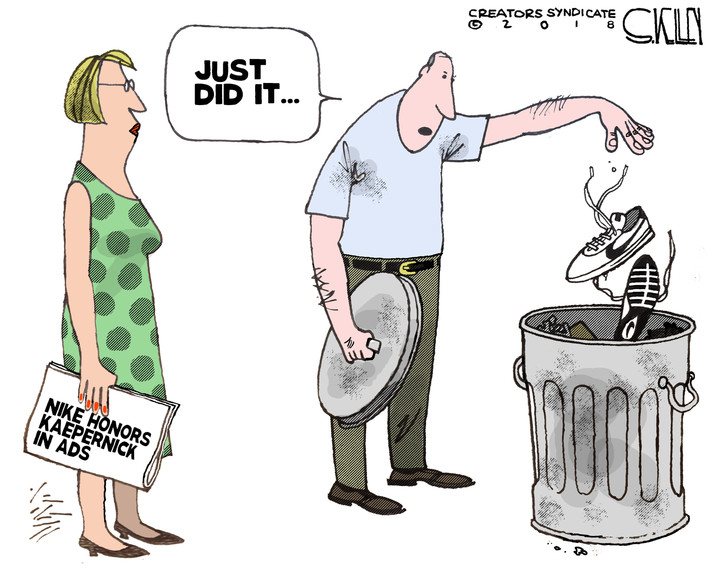 Former NFL quarterback Colin Kaepernick's attorney accused the musical group Maroon 5 of crossing the "picket line" to perform at the Super Bowl and called the explanation by Adam Levine, the lead singer of the musical group, a "cop-out."

Kaepernick, when he played in 2016, kneeled during the national anthem to protest what he considers an unjust criminal justice system that he believes allows cops to systematically "oppress" blacks. Kaepernick said: "There's a lot of things that need to change. One specifically is police brutality. There's people being murdered unjustly and not being held accountable. The cops are getting paid leave for killing people. That's not right."

No one doubts the existence of bad cops or of cops who make poor decisions or who use poor judgement. But where's the evidence of "systemic" racism? When black Harvard economist Roland Fryer conducted a 2016 study of police use of force, he expected to find widespread evidence of police officers disproportionately using deadly force against blacks. Instead, he found the opposite. Police, he concluded, were more hesitant to use deadly force against blacks than against whites. "It is," he admitted, "the most surprising result of my career." This tracks another study published in 2014 by researchers at Washington State University, who reached the same conclusion, finding "there was significant bias favoring (emphasis added) blacks where decisions to shoot were concerned."

According to the Manhattan Institute's Heather Mac Donald: "In 2016, the police fatally shot 233 blacks, the vast majority armed and dangerous, according to The Washington Post. The paper categorized only 16 black male victims of police shootings as 'unarmed.' That classification masks assaults against officers and violent resistance to arrest. Contrary to the Black Lives Matter narrative, the police have much more to fear from black males than black males have to fear from the police. ... Black males have made up 42 percent of all cop-killers over the last decade, though they are only 6 percent of the population."

While most people can name several recent high-profile police killings of unarmed blacks or deaths that occurred while in police custody — Eric Garner, Michael Brown, Freddie Gray, Sandra Bland, Tamir Rice, to name some — few people can name a single instance of an unarmed white who was killed by police or died in police custody. Yet the police kill more unarmed whites than unarmed blacks.

As to the claim of "institutional racism," government studies have debunked this. In 2013, the National Institute of Justice, the research arm of the Department of Justice, examined traffic stops by race, as traffic stops are the most common reason for a person to interact with a cop in any given year. Seventy-five percent of blacks stopped by police admitted that, in fact, the cops had a "legitimate reason" for stopping them. The NIJ study found that blacks were disproportionately stopped by the police, but that any numerical disparities resulted from "differences in offending" in addition to "differences in exposure to the police" and "differences in driving patterns."

Since Kaepernick began his protests, voters elected President Donald Trump. Trump posthumously pardoned former boxer Jack Johnson, the first black heavyweight champion, who was arrested and convicted on a bogus morals charge. Trump commuted the sentence of Alice Marie Johnson, a black woman serving a lengthy sentence after being convicted for involvement with drug traffickers and illegal drug money laundering. Trump also publicly asked the NFL protesters to provide names of those "people that they think were unfairly treated by the justice system." Trump promised to review their cases and, if warranted, he would "pardon them, or at least let them out." To date, the protesting players have yet to give him the requested list of names.

Also, Trump, with no input or participation by Kaepernick, signed a wide-ranging criminal justice reform bill. Even Trump critic Van Jones of CNN, a black pundit who attributed Trump's 2016 election victory to "whitelash" attended the Oval Office signing of the criminal justice bill that Jones called "a Christmas miracle."

Yet many players still support Kaepernick and feel that but for his political activism, he would have a QB job in the NFL. Really? NFL Hall of Fame quarterback Joe Montana, who once played for Kaepernick's team, the San Francisco 49ers, and won four Super Bowl rings, sure sees it differently. In 2017, Montana called Kaepernick's protest a "distraction" but said that it "comes down to his play as much as anything." Montana said: "But what it comes down to is 40 percent completion or even in the low 50s. You can't win in the league with that. You won't be in the league very long."

So, the cops do not engage in systemic, institutional or structural racism. One cannot have a meaningful discussion about alleged police misconduct without acknowledging the disproportionate amount of crime committed by blacks, which in turn results in the disproportionate interaction blacks have with the police.

Next season, how about we just enjoy some football?