Designed to make people lose all vestiges of humanity and individual worth? 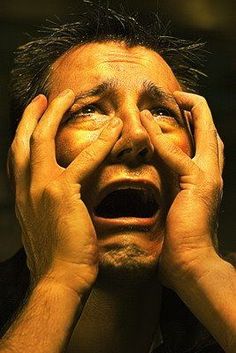 What is it with government offices? They just don't operate very efficiently, do they? Or do they?

Could it be that they are horrible places by design, purposely set up to make people lose all vestiges of humanity and individual worth? Perhaps these cold, ugly institutional places of discomfort have been conceived for the sole purpose of humiliation. If that is the case then they're certainly doing a heck of a good job at it.

Exposure to government bureaucracy and the degradation it brings can sometimes be avoided. I don't have to actually go to a post office if I don't want to deal with that, I can buy stamps in many other places and I can use other shipping companies to mail packages. But sometimes you just can't avoid the big government ordeal. I can't use a private service to renew my driver's license, I HAVE TO PERSONALLY GO TO THE DEPARTMENT OF MOTOR VEHICLES.

So there I was last week, eight o'clock in the morning standing in a line around the building waiting for the place to open. How come I didn't make an appointment? Well, I tried. When I called to make an appointment I was told I couldn't get one before my license expired.

I waited too long to call, you see. Foolish me, I thought that calling seven weeks ahead of the expiration date was enough time. Oh no, it isn't.

Standing in line gives you lots of time to think. I thought of all the people standing in front of me. When did they get here?

The office doesn't open until nine o'clock, have they been here since daybreak? Did they spend the night? Don't they have jobs to get to? Well, maybe not.

Most of my fellow DMV line-standers looked rather poor, not exactly CEO's of major corporations or wealthy lawyers, doctors, or movie stars.

That made me wonder. Where do the rich important people go to get their driver's licenses renewed? In all the years I've had to schlep myself to the DMV, why is it that I never saw anyone who looked the least bit well-to-do or important?


Honestly now, you know that big shots don't stand in line at the DMV. Why not? How do they get their driver's license? Where do they go? Is there a secret place set up for the important people, like they have in hospitals and airports, so they can avoid the riff raff? Do DMV employees make house calls to the elite?

Listen, when one is rich and famous there are certain perks that come with the territory, I get that. Big shots never wait to be seated at fine restaurants and always get the best table, they are escorted into exclusive waiting rooms at airports, they have very private wings in hospitals far away from the regular folks. And of course they have personal assistants running all those mundane errands for them.

But a personal assistant can't take a driving test for them, can they? So how does a Tiger Woods, Oprah Winfrey, or Leonardo DiCaprio renew their licenses? Where does Robert Redford go to take his test? Does Kim Kardashian wait in line to give her thumbprint at her local DMV? Does Judge Judy stand at the eye test window and fill out all the forms? We know Jay Leno is a huge classic car guy, so where does he go to take his renewal test? Do any of these people (and millions of other big shots) wait in line at the DMV for hours on end? We all know they don't.

So where do they go? I'd really like to know what the story is on this. Until I get some answers I can believe in, I'm going to stop waiting in line at eight o'clock in the morning. That's all. I don't care how many cars Jay Leno owns, I want to get renewed where he does.