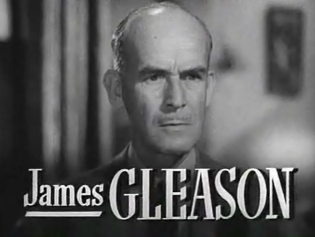 For classic movie fans James Gleason was one of those wonderful character actors that seemed to make whatever picture he was in so much better just because he was in it.

He was born in New York City in 1882, the son of William and Mina Gleason who were both in the theatre. As a child he made occasional appearances on stage but didn't get into the business professionally until after his stint in the army.

Gleason joined the army at the age of 16 and fought in the Spanish-American War, serving three years in the Philippines. After the war he joined the stock company at the Liberty Theater in Oakland, California, which his parents were running. He was married to actress Lucile Gleason (born Lucile Webster), and had a son, Russell Gleason.

For several years Gleason and his wife played in stock and toured in road shows until he reenlisted in the army at the start of World War I, serving until the end of the war.

When he returned he not only appeared on stage, he began writing, including a show called, "Is Zat So," which he also produced for the NY stage. He also wrote and acted in "The Fall Guy" and "The Shannons on Broadway." He made his first film appearance in "Polly of the Follies" starring Constance Talmadge in 1922.

After that he appeared and contributed dialogue for "The Broadway Melody" (1929) for MGM (the second movie to win the Academy Award for Best Picture).

In 1929-30 he starred and wrote ""The Swellhead," "Dumbbells in Ermine," "What a Widow!" and "Rain or Shine." He and his wife were then contracted to Pathe, Lucille to act, and James as a writer. Skinny, bald, with a pencil mustache and pronounced Brooklyn accent, James Gleason was a master of the double-take.

He made his mark in films playing gruff but warm-hearted New York type characters, such as newspaper editors, detectives or cab drivers. He starred in two movie series, playing police inspector Oscar Piper in six Hildegarde Withers mystery films during the 1930s, and Joe Higgins in the first seven of nine films about the Higgins Family, in which his wife Lucile and son Russell played Lil and Sydney Higgins.

A little known fact is that Gleason was at one time being considered for the part of Hopalong Cassidy, the role of a lifetime for William Boyd.


He appeared in several pictures with his wife Lucile. In "The Clock" (1945), he played a milk cart driver who gives lessons in marriage to the characters played by Judy Garland and Robert Walker, while Lucile played his wife.

The same year, he played the bartender in the film adaptation of "A Tree Grows in Brooklyn." In the Frank Capra 1941 classic "Meet John Doe" Gleason played the tough newspaper editor that prints the John Doe story.

But undoubtedly his most famous acting role was as Max Corkle, the manager of boxer Joe Pendleton who was mistakenly taken from this life into the next, in the hit 1941 fantasy "Here Comes Mr. Jordan."

For that part Gleason received a nomination for an Academy Award for Best Supporting Actor.

Other pictures include "My Gal Sal," "A Guy Named Joe," "Arsenic and Old Lace," "The Hoodlum Saint," "Down to Earth," "Forever Female," "The Yellow Cab Man," "Suddenly," and "The Last Hurrah" among many, many more. James Gleason also did radio and later television shows including several episodes of Alfred Hitchcock Presents, the Reed Hadley legal drama The Public Defender and ABC's The Real McCoys.

Although major acting awards eluded him, his many fans will always remember James Gleason for his charming and endearing screen roles. In honor for his contributions to the motion picture industry, Gleason has a star on the Hollywood Walk of Fame.