No Thanksgiving? No Thanks 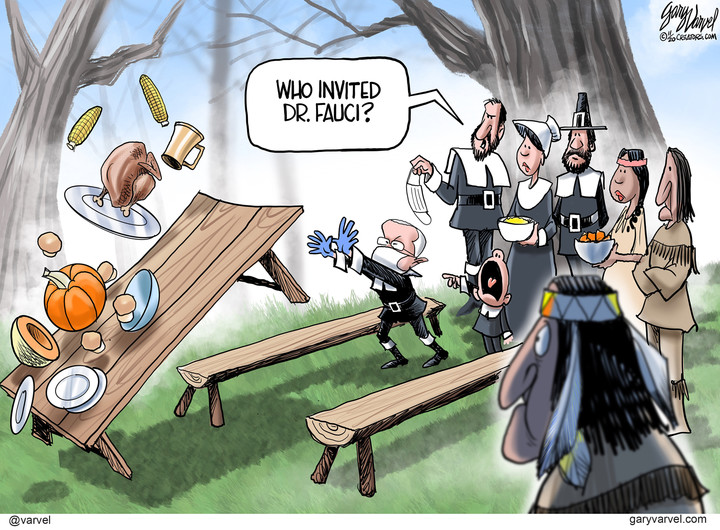 . Just a week of so before Thanksgiving and it appears that we on the left coast have very little to be thankful about, according to our "Beloved Leader" in Sacramento. Here are his official governmental dictates for Thanksgiving gatherings:

Gatherings cannot have people from more than three households. This includes anyone who is present at the gatherings.

Keep the households you spend time with stable. Don't mix into multiple gatherings.

All gatherings must be held outside. People can go inside to use the bathroom.

Gatherings "may occur in outdoor spaces that are covered by umbrellas, canopies, awnings, roofs, and other shade structures provided that at least three sides of the space (or 75%) are open to the outdoors."

Don't attend a gathering if you feel sick.

Keep physical distance from others and practice hand hygiene.

Wear a facemask when you can to stop COVID-19 from spreading.

Gatherings should only be two hours or less.

"Singing, chanting, and shouting are strongly discouraged." Those who participate in those activities should wear masks.

This week California Democrat Gov. Newsom live-streamed a press conference warning that health officials are "sounding the alarm" over the rapid increase in COVID-19 cases. There are more cases of the virus being reported than ever before. Be afraid. Be very afraid. (Never mind that the death rate has gone down overall. We don't talk about that.)

Newsom said that the state on Tuesday moved forty counties back to more restrictive reopening tiers and tightened the rules on mask wearing in public. He also announced some changes to the state's tiered reopening system. Under the new system, counties will move back levels within one week instead of two, and some counties may move back multiple tiers. Counties will also have to make changes through the affected industries more swiftly instead of the previous 72-hour waiting period.

"The spread of COVID-19, if left unchecked, could quickly overwhelm our health care system and lead to catastrophic outcomes," Newsom said in a news release. "That's why we are pulling an emergency break in the Blueprint for a Safer Economy. Now is the time to do all we can — government at all levels and Californians across the state — to flatten the curve again as we have done before."

Specifically 40/58 California counties just moved backwards, some fell multiple tiers. And every single county in southern California is now in the most restrictive "purple" tier, including Orange County & Ventura. This closes indoor dining, gyms, and etc. effective immediately. Newsom also said he is considering implementing a statewide CURFEWĂ‰He is looking at studies from other countries about them including France and Saudi Arabia. He hasn't decided on anything yet, but stay tuned.


Gee, it sure sounds like the Black Plague has struck and people are dying in the streets. So I wonder why it was okay for our elected Democrat lawmakers to totally ignore all the rules concerning coronavirus travel warnings and fly off to Maui to party with lobbyists last week just as their state was thrown into a vicious second lockdown? Hmmm.

Maybe it was for the same reason that our esteemed Gov. Newsom broke his own lockdown orders to attend a birthday dinner at the most expensive restaurant in the state for one of his political advisers last week with at least a dozen people from several different households. Which is exactly the type of gathering his administration has discouraged during the coronavirus pandemic. Or maybe it was for the same reason that Nancy Pelosi was able to get her hair done without wearing a mask at a beauty shop that was supposed to be locked down a couple of months ago?

Meanwhile my sister and brother, like millions of others, continue to be confused and depressed over this thing. So much so that they will not come to my house at any time for any reason. This year I'm thankful to have good friends who live across the street and will be celebrating Thanksgiving with my wife and I. In our home. For longer than 2 hours. Without wearing masks.