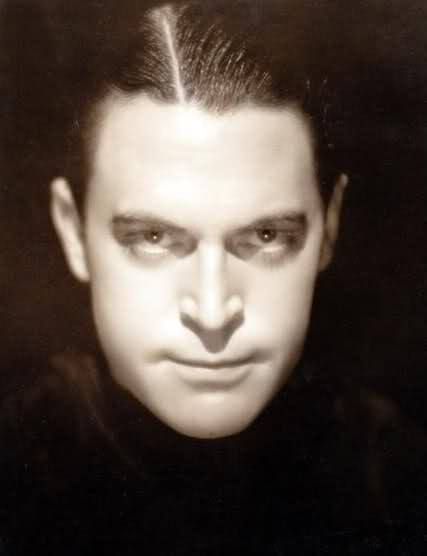 In an effort to attract younger readers to this space it has been subtly suggested that your humble correspondent engage in "edgy, youth-orientated envelope-pushing" subject matter, to be accompanied by provocative photos.

The objective is to appeal to cutting-edge trend-setting tastes. So, being the accommodating kind of guy I am, I have chosen to write about an obscure movie actor from 80 years ago along with an appropriate photo of the man.

I have made one concession, however. I am posting the following disclaimer below, so as to not shock or offend any edgy, envelope-pushing youths who might have stumbled onto my column quite by accident.

(DISCLAIMER: THIS WEEK'S COLUMN IS ALL ABOUT AN OLD MOVIE STAR FROM THE 30'S AND 40'S. IF THIS TURNS YOU OFF STOP READING NOW! YOU HAVE BEEN WARNED!)

Now let's get on with it.

It's always great fun to watch classic movie favorites such as "Casablanca," or "North by Northwest." Spending time with Bogey and Ingrid or Cary and Eva is like visiting old friends.

But then there are the pictures and stars that are maybe not so familiar.

One of the real joys of watching old movies is discovering those pictures and actors for the first time and developing an appreciation for them. The latest of these delightful "discoveries" for my wife and me has been Chester Morris.

We knew Chester Morris mostly from the Boston Blackie detective programmers produced by Colombia in the forties, but also from other pictures like "Five Came Back." The fact is, Morris was a really good actor and it's too bad that for the most part he has been forgotten. He had some very prestigious film roles early in his career, and was nominated for an Academy Award.

Born John Chester Brooks Morris on February 16, 1901 he performed on stage, film, television and radio. He made his film debut in 1917 in "An Amateur Orphan" and finished his film career in 1970 with "The Great White Hope," playing the part of Pop Weaver. That means that Chester Morris had been a working movie actor in seven decades. In an industry as fickle and ever changing as the movie business, that's quite a track record.

Then Morris joined his parents, sister and two brothers on the vaudeville circuit for a couple of years before returning to Broadway with roles in "The Home Towners" (1926) and "Yellow" (1927).

While appearing in the 1927 play "Crime," he was spotted by a talent agent and was signed to a film contract.

Chester Morris made his sound film debut in the 1929 film "Alibi", for which he was nominated for an Academy Award for Best Actor. He followed with roles in "Woman Trap" (1929), "The Case of Sergeant Grischa" (1930) and "The Divorcee," starring Norma Shearer in 1930.

Later that year, Morris was cast as one of the leads (with Wallace Beery and Robert Montgomery) in the M-G-M prison drama "The Big House," which made him a star. For the next two years, he worked steadily in films for United Artists and M-G-M and was cast opposite Jean Harlow in the 1932 comedy-drama "Red-Headed Woman." By the mid-to-late 1930s, Morris' popularity had begun to wane and he wound up as the lead actor in B-movies such as "Smashing the Rackets" (1938) and "Five Came Back" (1939), a solid suspense/action picture that sort of paved the way for future disaster movies like "Airport," and the "Poseidon Adventure." His co-star in that one was Lucile Ball.

Morris' career was revived when he was cast as Boston Blackie in 1941.

During World War II, Morris performed magic tricks in over 350 USO shows. He had been practicing magic since the age of 12 and was considered a top amateur magician. He often enjoyed inserting a bit of his card tricks in some of the "Blackie" pictures.

Throughout the 1950s and 1960s Morris spent most of his time working in television and the theater. His last motion picture, "The Great White Hope," was released after his death in 1970.

But for those who remember him at all, he is undoubtedly best known today for portraying Boston Blackie, that suave criminal- turned-detective, in the entertaining Boston Blackie series, which shows up from time to time on TCM.

Chester Morris was a pro, always giving it his all whether it was a major feature or a lower budget Boston Blackie. He's an actor worth watching.