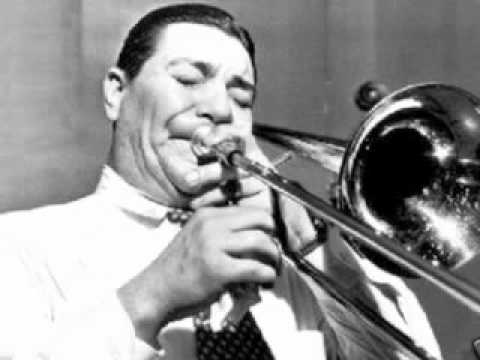 Regarded as the "Father of Jazz Trombone," not many people outside of true Jazz fans know who Jack Teagarden was or what his music sounded like. That's a shame because the man was one of the all time greats. He was born in Texas in 1905 and by the age of 16 he was playing trombone professionally with local dance and jazz bands.

In 1921 while playing with Peck Kelley's Bad Boys in Houston he was heard by visiting band leader Paul Whiteman and was offered a spot with his New York orchestra but it wasn't to be. Teagarden continued to play with local groups until around 1926 when he made his first trip to New York as a performer with Doc Ross's Jazz Bandits.

The next year he went to New York on his own and won a position in Ben Pollack's band, beating out Glenn Miller for the seat of first trombone. He made his first recording that year (1927) as a member of the Kentucky Grasshoppers, an offshoot of Pollack's group.

In 1933, he signed on with Paul Whiteman's orchestra for five years. In 1939 Teagarden formed his own band which lasted until 1947. He teamed up with Louis Armstrong's All-Stars for some classic recordings in the late 1940s and formed the Jack Teagarden All Stars Dixieland band in 1951.

Jack Teagarden was considered by many to be the greatest jazz trombonist of his era, and was also an excellent jazz singer, developing a unique blues vocal style. Listening to him sing, even if you don't know him, you can certainly tell that the man is a jazz musician. He had that wonderful gravelly sound in his voice. He's especially terrific in duets with Bing Crosby, Louis Armstrong, and Johnny Mercer. And he was an inventor, redesigning mouthpieces, mutes, and watervalves and inventing a new musical slide rule.

Jack appeared in several movies, most notably "Birth of the Blues" (1941), "The Glass Wall" (1953), and a documentary on the 1958 Newport Jazz Festival "Jazz on a Summer's Day" (1960). He was an admired recording artist, featured on RCA Victor, Columbia, Decca, Capitol, and MGM discs.

As a jazz artist he won the 1944 Esquire magazine Gold Award, was highly rated in the Metronome polls of 1937-42 and 1945, and was selected for the Playboy magazine All Star Band, 1957-60. Teagarden was the featured perfomer at the Newport Jazz Festival of 1957. Saturday Review wrote in 1964 that he "walked with artistic dignity all his life," and the same year Newsweek praised his "mature approach to trombone jazz."

Sadly, as seems to be the case with so many great musicians, he died much too young. Early in 1964 Teagarden cut short a performance in New Orleans because of ill health. He briefly visited a hospital then was found dead in his room at the Prince Conti Hotel in the French Quarter on January 15. He was 58. The cause of death was bronchial pneumonia, which had followed a liver ailment.

"I sometimes think people like Jack were just go-betweens," cornetist Bobby Hackett told a friend. "The Good Lord said, 'Now you go and show 'em what it is', and he did. I think everybody familiar with Jack Teagarden knows that he was something that happens just once. It won't happen again. Not that way..."