And let the indoctrination begin . . . 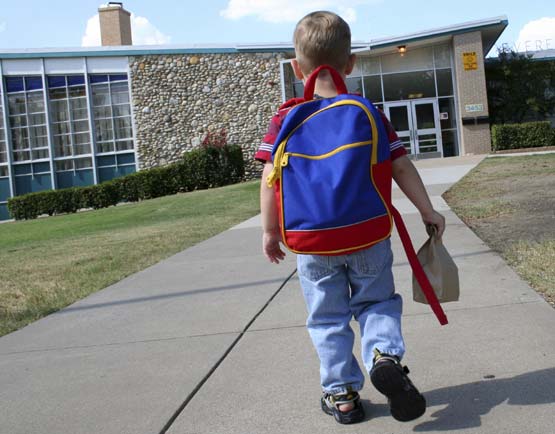 Now it begins. My sweet innocent six year-old nephew began his first day in public school this week and things will never be the same for him.

His little world will be growing larger. He will now, and for the rest of his school life, be the receptacle of knowledge and information poured into him by his teachers.

His instructors will teach him the basics, of course, reading, writing, spelling, arithmetic, and so on. But also, for better or worse, they will be the main transmitters of ideas, values, and truth in his life. His teachers will be in charge of most of the information going into his impressionable head. Since the vast majority of teachers tend to be politically left of center in their values and worldviews my nephew will, in the truest sense of the word, be getting a "liberal" education.

For the first time in his short life my nephew will be exposed to ideas such as "environmental global warming," "political correctness," "multiculturalism," and "gender-free pronouns." These leftist cultural beliefs will be drilled little by little into his brain by his "instructors" as he goes through elementary school, then middle school, and, finally, high school and college.

He will learn that man-made global warming is a settled argument, that anyone who disputes it is a denier, a crackpot in the same way that flat-earth believers are crackpots. Chances are he will never be shown the other side, that many eminent scientists who have studied climate change categorically repudiate the claim that humans are responsible for it.

He will hear for the first time of "racism." He will learn terms like "white privilege" and be indoctrinated into modern revisionist propaganda regarding American history and how the European white men destroyed this continent and killed, raped, and ravaged the indigenous people while enslaving Africans, who were really the ones who built this nation.

He will be taught how men have kept women down for centuries. He will learn the anti-male doctrine of "toxic masculinity" and how it has caused havoc and pain to millions throughout history.

He will be encouraged to repress his aggressive inclinations, his natural male tendencies and to develop his softer, feeling-based emotions. Feminism, he will learn, is a virtue, masculinity a liability.

As he continues through his public school "education" he will learn to embrace all forms of egalitarianism including multiculturalism, which holds that no culture on earth is any better or more virtuous than any other culture, no matter what their practices or believes may be.

He will learn that there are many more gender options than simply male and female. He will be taught to celebrate LGBTQ people as normal life choices and to look within himself to question his own inter-feelings toward sexuality. He will be given the option to call himself anything he believes he is, and have others call him that too. He will be taught to use gender free pronouns when addressing others so as not to disrespect them.

He will be instructed in the value of identity politics, and be taught to judge people not on individual character, but on group designation. All groups are equal, but some groups are more equal than others in terms of social justice in our society.

He will be shown how important it is to allow the government complete control over his life, so as to be the recipient of "free stuff." Free college, free healthcare, free housing, and a paid annual salary whether he works or not. He will be taught that having restricted immigration into our country is racist and wrong, and that a policy of open borders is fair and right. We are all people of one world and all people should have the same rights to this county as citizens do.

The ideal of having a father and a mother in a family will never be brought up, having two mothers or two fathers or what have you is considered just as wonderful. So now it begins.

My sweet little nephew has been launched into our secular left-leaning public school system. Hopefully his dad, mom, grandparents, and the rest of us will be able to offer a modicum of balance, common sense, and truth to the one-sided politically correct propaganda heĂ•ll be receiving. I pray for that.