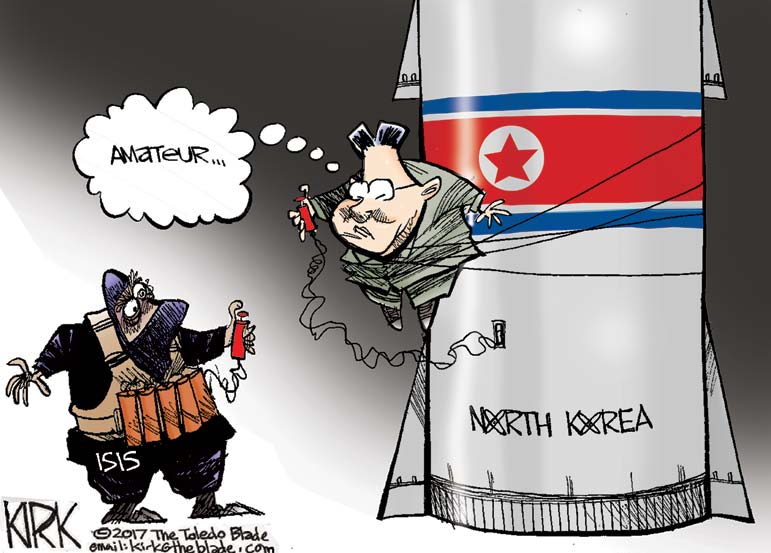 North Korea's insane fat boy leader, Kim Jong Un is threatening to wipe us off the map. Nothing new there, he's been saying things like this for years.

When his father and grandfather were running things they were almost as nuts as he is. The difference is, they didn't have advanced nuclear weaponization.

This meshugenah does. That's why all of a sudden pajama boy's promises to blow us up aren't so funny anymore.

The CIA and other key U.S. intelligence agencies have determined that North Korea has successfully miniaturized a nuclear weapon to place atop a ballistic missile. This is a big, big, deal. Successful miniaturization does not mean North Korea has a reliable nuclear-armed missile that can hit the U.S., at least not yet.

But it puts them much further along than ever before. Too close for comfort, as the saying goes.

The North Koreans have threatened to attack the U.S. territory of Guam with four ballistic missiles as early as next week. Guam Homeland Security spokeswoman Jenna Gaminde saidĂŠif North Korea fires missiles toward Guam, they would take about 14 minutes to reach the island. Of course Guam is home to thousands of American troops, this would most definitely mean all out war.

How the hell did we get to a place where there are no good alternatives to a war that would likely kill hundreds of thousands? North Korea's nuclear proliferation has been going on at least since the early 90's when Bill Clinton announced his "Agreed Framework" deal with them. The idea was to get North Korea to dismantle their nuclear program. This was to be accomplished by sending them aid in exchange for their promise to give up nuclear development. Well, that didn't work.

The problem was that the Clinton administration couldn't successfully verify whether the North was dismantling their program or not. As we know now, they were not. In fact they were building it up all the time they were taking our money and aid. Nothing got better under the George W. Bush and Barack Obama administrations. In the end North Korea was able to get plutonium and build their first nuclear bomb.

Now it's in President Trump's lap. So far he has responded to Kim Jong-Un's threats to bomb Guam by warning him if he does anything like that, he will face "fire and fury like the world has never seen."

Secretary of Defense Mattis said that the US has military options in place if need be, but our first choice is to use diplomacy if at all possible.

"Do I have military options? Of course, I do. That's my responsibility, to have those. And we work very closely with allies to ensure that this is not unilateral either --- and of course there's a military solution," Mattis said. "We want to use diplomacy. That's where we've been, that's where we are right now and that's where we hope to remain. But at the same time, our defenses are robust"

Here's our problem. Diplomacy can work when you're dealing with sane, rational leaders who want peace for their country and its people. It doesn't work with megalomaniacs and tyrants bent on gaining power by destroying others. Kim Jong-Un is only the latest in a long line of nut jobs whose rolls include his father, Kim Jong-il, Robert Mugabe, Idi Amin, Lenin, Stalin, Osama bin Laden, Hirohito, Mao, and Hitler to name but a few.

Yep, there are some people you just can't deal with. Trump has always claimed that he can deal with anybody, but can he really? Israel knows from decades of experience that you can't compromise with people whose main objective is to annihilate you. How do you deal with someone who only wants you dead? What do you say? "Okay, here's the deal. I won't fight you anymore, and in exchange you can kill me and take my land." Doesn't sound like a good deal to me.

What do we do? If we do a preemptive strike we risk the North bombing the South in retaliation. If we do nothing we risk the North building up their stockpiles until the day comes when they can fire ballistic missiles not only at Guam, but possibly at mainland US cities. Some hope that China will help us stop them, but that isn't too likely.

So what's the answer? If I had it I would be the greatest political genius of the century. I do know one thing, though. Sometimes in this world of ours there are just no good solutions. You have to pick the best bad solution and pray that it works out.