Getting Everything You Want 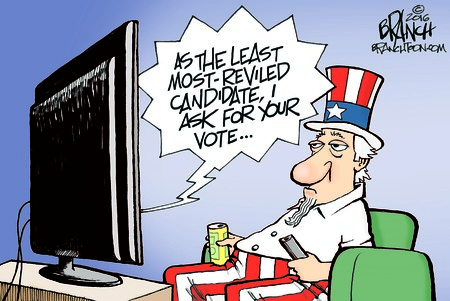 When was the last time you got everything you wanted? I mean 100% everything.

Did the last car you buy have absolutely every single thing you wanted in a car? Are your friends exactly the way you'd like them to be? Are you 100% satisfied with yourself in every single way?

It isn't too often that we get everything we'd like to have. Most of the time we have to compromise or settle. Even when it comes to husbands and wives or boyfriends and girlfriends, chances are your significant other isn't perfect. Of course we tell our loves that they are perfect, that's called pillow talk, but we know there is a thing a two that we'd like to change in them.

When was the last time you voted for someone you agreed with on every single social and policy issue? Have you ever voted for a person that shared every single value that you had? If you have, then good for you, you're probably one in a billion that can say that. I can only tell you that I have never voted for anyone in my life that I agreed with 100%. And it sure won't happen this year either, no question about it.

We have two flawed people running for president in 2016. Before we even get into policy issues or liberal/conservative viewpoints, let's outline their personal traits; Hillary Clinton is a known liar, cheat, self-serving crook and Donald Trump is a crude inflammatory braggart. It's a shame those are our two choices, but there they are. Some political pundits say that many American voters will simply decide not to vote this time. Not me, I'm voting and I'm voting for Trump.

As a staunch conservative I simply cannot opt out and watch my country continue its slide into large government socialism. If Clinton is elected, our traditional American values of individual freedoms, self-dependence and personal liberties will be gone for generations, or possibly for all time.

She will make sure the Supreme Court will be firmly packed with far-left justices who will legislate progressive policy from the bench. The Constitution will be, for all intents and purposes, shredded. Welfare, food stamps, and other federal programs will be increased and added to. ObamaCare will be transformed into its next logical stage, single-payer socialized medicine.

Our boarders will disappear and will be wide open to everyone, friends and foes alike, since comprehensive vetting will be all but impossible. America will retain his current position of "leading from behind" and Islamic Jihadism will grow overseas and domestically. The middle class will continue its decline as the rich get richer and the poor get poorer. Inner city violence and racial tensions will worsen and our country will become ever more divided.

At best, a Hillary Clinton White House will be a continuation of what Obama has set up, but believe it or not, things might get even worse. If Republicans also lose the House and Senate to the Democrats then the Left will turn that into a mandate for complete change in our country. The United States will be pushed further into socialism than ever before. More people will depend on government support and the ones who still work will be depressed and less motivated.

Socialism has never worked in any country on the planet. It's a failed doctrine. As Margaret Thatcher once said, "The problem with socialism is that you eventually run out of other people's money." We've seen what's happened to Europe and still the Democrats are pulling America in that direction.

No, I do not trust Hillary Clinton because I know who she is, how she operates, and what motivates her. I remember all the scandals; I remember what she did to the many women who came forward to testify in harassment charges against Bill Clinton. I remember how the Clintons pillaged the White House when they left office the first time. I remember Benghazi and how she sat by as our embassy was under attack and our Ambassador and three other brave Americans were slaughtered.

Trump is no prize. He's not socially conservative, but he will appoint a better balance of justices to the Supreme Court. He's not religious, but he respects those who are and will preserve the First Amendment. He's not a military hawk, but he will take care of our veterans and safeguard our Second Amendment. He's brash and outrageous, but I don't think he's a crook or a liar.

And finally, beyond all that we know about the crooked Clintons, this election is much bigger than they are. It's about the soul of America and its direction into the future. I won't stand by and see my country fade away. I may not get everything I want, but in this election there's a real chance that I could wind up getting nothing I want. That's why I'm voting for Trump.