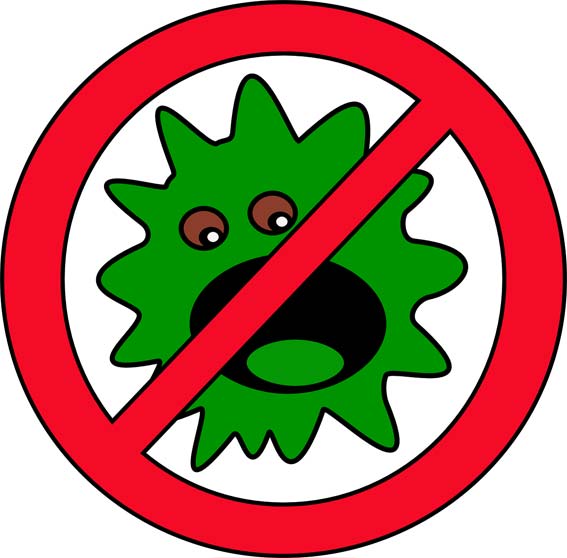 The topic today, students, will be how to make sure you are germ free in a dirty world.

The short answer is you can't.

Germs are everywhere and unless you live in a bubble you live with germs. You say you don't like it? Well, I don't like it either but that's the way it is so quit arguing about it.

Germophobia is literally the fear of germs driven by obsessive-compulsive behavior. Another term for this is called mysophobia. By the way, mysophobia is not to be confused with miceophobia, which is the excessive fear of small rodents.

Billionaire Howard Hughes was a classic example of a germophobe, eventually locking himself away from the world, living in ultra-sanitized private hotel room environments. He wore tissue boxes on his feet to protect them. He wouldn't shake hands with anyone and he burned his clothing if someone near him became ill. Toward the end of his life, he would lay naked in bed in darkened hotel rooms in what he considered a germ-free zone.


It's safe to say that Howard made a major jump from a desire to be clean to going totally loony tunes. But you don't have to be completely nuts to want to avoid germs in public places. I try my best to keep germ-free while out and about. Okay, I admit I have from time to time laid in bed naked in darkened hotel rooms, but I haven't measured my feet for tissue box slippers yet.

Any doctor will tell you that the best way to avoid germs is to keep your hands clean. To do this properly, you must wash them for a full 20 seconds. If you don't do it for at least that long than you're wasting your time. And don't forget the soap, just rinsing in water won't do it. Thankfully my wife keeps a supply of disposable moist towelettes in her purse for those times when washing in the sink isn't possible.

When eating out at restaurants remember that anything you touch at the table is literally crawling with germs. Hundreds, maybe thousands of hands that weren't necessarily very clean, have touched the salt and pepper shakers, the condiments, the chair or booth, and especially the menus. Think about it for a moment. Okay that's enough; you don't want to make yourself sick.

Now that you're at the table and have handled the menus and everything else, use a towelette to wipe your hands before the waiter serves your food. Once the food has arrived you can breathe easier knowing that when you pick up your sandwich you do so with clean hands. But careful! If you reach for the ketchup bottle or the salt for your French fries your hands will no longer be sanitized. Better wipe those table items down with another towelette before using.

As a matter of fact, use a towelette on the edge of the table just in case you happen to touch it. In other words, wipe down anything you might put your hands on before putting those same hands anywhere near your mouth. If your napkin falls on the floor, leave it there and ask for a new one.

And here's something else, watch your waiter or waitress carefully. Keep an eye on what he or she is touching. If your waiter picks the napkin up off the floor, then gives you a new one before washing his hands, you might just as well have used that same dirty napkin. You're better off at this point just wiping you hands on your shirt.

Okay, I can't put it off any longer. Public restrooms. Here's how you deal with using them. Rule one: Wait until you get home to use the bathroom. If rule one isn't an option and you absolutely must use a public toilet, then follow these directions for rule two: Have a couple of packaged wipes with you going in, just to be on the safe side. After you've opened the restroom door and are forced to touch anything else in there, wash your hands before doing your business.

Wipe down any public toilet facilities that your body might come in contact with. After your business is done, wash your hands again, then before turning off the water faucet, dry them with a clean paper towel. Then use that paper towel to shut off the faucet. But your job isn't over yet. Next pull down another paper towel to use to open the restroom door as you exit. (This is important since many people don't wash their hands after using the toilet).

These steps should guarantee you a relatively safe public restroom experience. But wearing tissue boxes as shoes wouldn't hurt either.