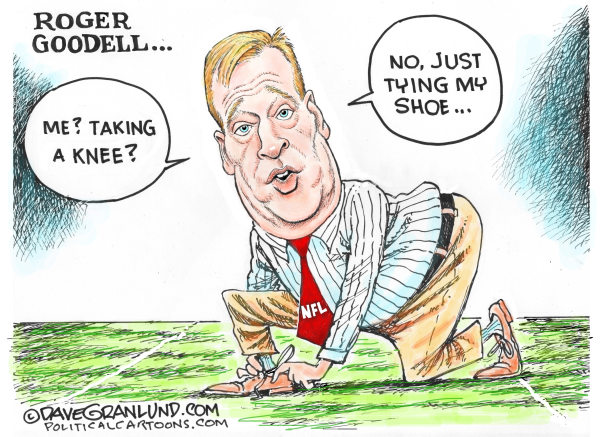 In the aftermath of the death of George Floyd and the subsequent rioting across the country, National Football League commissioner Roger Goodell released a video declaring that the NFL was wrong for how it handled player protests in the past.

"We, the NFL, condemn racism and the systematic oppression of Black People," the league tweeted. "We, the NFL, admit we were wrong for not listening to NFL players earlier and encourage all to speak out and peacefully protest. We, the NFL, believe Black Lives Matter."

To begin with, this country has not engaged in racism and systematic oppression of black people since the end of slavery. Yes, after that there were Jim Crow laws in the South, "separate but equal" but that all began to change in the mid-20th Century. Of course there are racists among the over 300,000,000 people who live here, just as there are anti-Semites and other haters, it canĂ•t be helped.

People have biases and prejudices in every country on earth and in every era throughout history. But to say that the United States of America in the year 2020 engages in institutional racism and the oppression of blacks is a lie and a slap in the face to Americans of all races.

Over the course of the last 60 years blacks have made enormous economic and social gains. Furthermore a racist country that opposes blacks doesn't elect a black man president for two terms.

Another thing that hasn't been pointed our nearly enough, is that the group Black Lives Matter is a revolutionary hate group, similar to Antifa, funded by Marxists, anarchists, and other far left America-hating organizations and individuals.

Black Lives Matter sprung up about 5 years ago and propagated the lie that police departments throughout the country were targeting and systematically murdering black people. By aligning the NFL with this group Goodell has pushed professional football over to the anti-police political left.

Goodell went on to say that he would begin connecting with players who are making their voices heard and added: "Without black players, there would be no National Football League, and the protests around the country are emblematic of the centuries of silence, inequality and oppression of black players, coaches, fans and staff.

"We are listening. I am listening. And I will be reaching out to players who have raised their voices and others on how we can improve and go forward for a better and more united NFL family."

"Oppression of black players?" How are multi-millionaire players oppressed? And who in America spends the money to watch and support these suppressed black players? Mostly white men. Making black players incredibly rich and famous doesn't sound so racist to me. How does Goodell want to "improve" things for the black players in the NFL? Make them richer? More famous? Maybe make it a rule that black players can no longer be tackled.

Remember it all started in 2016 when Colin Kaepernick refused to stand for the national anthem before a football game. "I am not going to stand up to show pride in a flag for a country that oppresses black people and people of color," Kaepernick said following the game.

It makes me wonder if the NFL will soon do away with the playing of the national anthem all together and stop flying the flag at the stadiums during football games. On second thought probably not, since flying the flag and playing the anthem gives players the perfect occasion to openly demonstrate their contempt for the country. Nothing like displaying oneĂ•s disrespect and ridicule for a country that afforded you the opportunity to make millions of dollars.

You can bet that every single football player will be kneeling during the playing of our national anthem from now on. Probably the referees, coaches, and managers will take a knee too. Possibly the entire stadium will no longer stand for The Star Spangled Banner. And not just in football, this will carry into basketball, baseball, hockey, soccer, all sports both pro and college. Many even Little League and Pop Warner. Why not? Kids want to emulate their heroes in the big leagues.

Even if you believe that black suppression is prevalent in America, which I donĂ•t, is that any reason to flush the whole country down the drain? Do you ignore the great goodness that this country has done since its inception? Do you deny that America has been a beacon of freedom for millions over the decades? Millions of people around the world are literally dying to come here. If this were such a racist oppressive country, why would they want to live here?

These are not questions that Goodell and so many others are pondering today. That would call for actually thinking. Much simpler to take a knee and repeat over and over again, "black lives matter."