Proud to be a curmudgeon 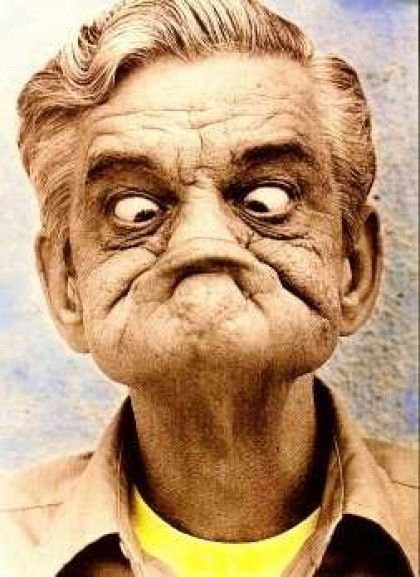 If you've been reading my columns for any length of time you must know by now that I'm more than qualified for the Curmudgeon of the Century Award. (I don't know if there really is any such award, there probably isn't. But if there ever is one, I'm a shoe-in.)

I don't mind being a curmudgeon; it's a noble profession. Moaning and groaning about things is what I do for a living. As the saying goes, it's a dirty job but somebody has to do it.

In my case, I have good reason to be grumpy, ill tempered, and surly: I live in a post-cultural world peopled by uncultured people.

Although there may be an exception here and there, most people walking around today are irritating, annoying, and obnoxious. The older I become, the more I realize that the vast majority of my fellow human beings are morons, or if not full-fledged morons, then they either act like morons or sound like morons, which is just as bad.

One truly offensive example (of which I have written about in past essays) is the way many people speak. The misuse or mispronunciation of words and speech might seem like a small thing, but it's like fingernails on a chalkboard to me. It's not that I have little tolerance for these small irritations, it's that I have zero tolerance. None. I'm much too old to be subjected to vocal garbage. Speak correctly people or shut up.

A while back I first reported on the "vocal fry" speech affectation, which was begun a few years ago, mostly by youngish women who undoubtedly picked up on it from listening to young actresses in movies and television. They emulated it because they wanted to sound like their idols. It's no secret, by the way, that most young women want to sound like other young women who they believe are "cool."

The "vocal fry" is when the woman's voice drops down and trails off in a sort of low vibrato at the end of a sentence. It's a raspy, creaky sound, and once you're aware of it, you can't miss it. It kind of sounds like a sore throat or the start of coughing up phlegm. Well, sorry to say I have a sad update on that.

As I mentioned, primarily young women first used this speech affectation. Well, this repulsive "vocal fry" has now spread. I'm hearing older women and little girls using it now (again, emulating what they hear in popular media and from other females). And guess what? That's right, even young men are beginning to make that sound in their voice too. Total affectation. Totally obnoxious and totally irritating.

Another mispronunciation that is gaining popularity among the masses is the word "important." A pretty simple word as words go, it would seem, but evidently it's much too difficult for many to pronounce correctly today. The word has three syllables. Im-por-tant. That last syllable begins with the letter "t" and it isn't silent, it should be pronounced. But too many now have dropped the "t" in important and say "im-por-ant.

Im-por-ant. This moronic way of pronouncing "important" is not done solely by illiterates; I'm hearing it from professional newsreaders and others on radio and television that earn their livelihood by speaking publicly. Amazing. There are other word examples such as "didn't" and "wouldn't," and "couldn't." All now pronounced ""did-dant," "Wou-dant," and "coud-dant."