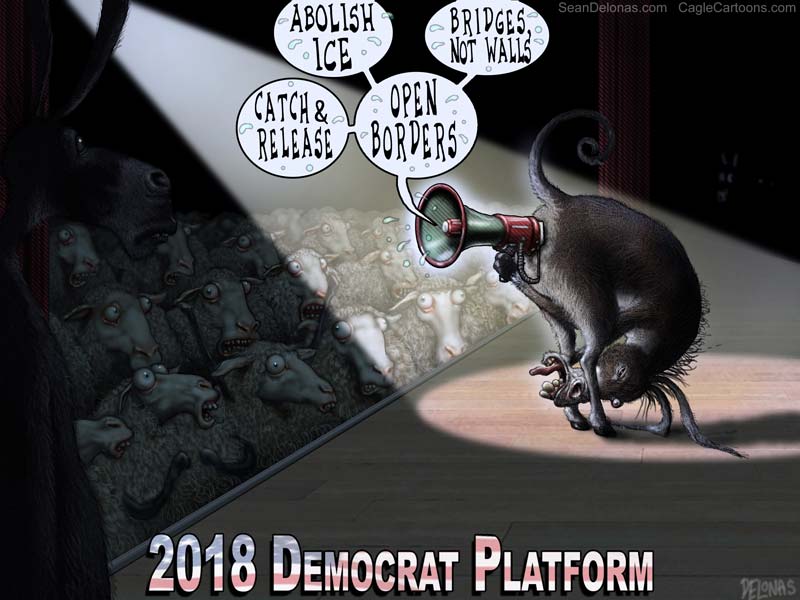 What do you do in our country when you are unhappy with the way things are going politically? Remember the old saying, "If you don't like the law, then change the law." Meaning you need to do two things: get propositions on the ballot that you can vote for, and vote people into office who can make changes happen that you agree with.

What you don't do is encourage anarchy by rioting in the streets, destroying private property, blocking the roads, and publicly harassing and physically threatening those with whom you disagree with by screaming at them in stores, at restaurants, and in front of their homes.

For those on the far left, they do. They most certainly do, and it seems to be getting worse all the time.

The words are becoming coarser, the screams are louder, the dissent is not peaceful it is destructive and frightening. When crazy mobs encircle people who simply want to have a nice dinner out, or have obscenities shouted at them in front of their residence when they just want a quiet evening at home with their families, you know things have gone too far.

Social media makes it really easy to gather large groups of like-minded angry people together who have nothing better to do than descend on innocent people whose only crime is that they happen to believe in something different than the angry group. And get enough angry people together and they easily degenerate into a mob mentality.

Mobs become uncontrollable and hate escalates when the mob grows larger. Surrounding people or getting in their face is threatening and when people feel threatened they either run or fight back.


If it were only the extreme far left engaging in this bullying tactic it would probably not amount to much, but too many Democrats along with their mainstream media brethren keep the fires stoked.

Sadly, there are more than enough ignorant people in our country with nothing else to do but take to the streets. Media outlets and left-leaning politicians encourage it. Too many in our society are too willing to resort to anarchy; they want to tear down civil discourse and proper law and order.

Why? All because Donald Trump won the presidency. That did it.

To be sure the angry left was angry before the election, they've been angry for decades, but the Trump thing really set them on fire. "RESIST" became their mantra from the start. Democrats flatly refused to accept anything this president proposed.

The Dems opposed tax cuts. They opposed boarder security. They opposed everything Trump did to make our economy stronger, get more people back to work, and reduce wasteful regulations and government spending. They opposed Neil Gorsuch for the Supreme Court and now they oppose Brett Kavanaugh. They invented the fake "Russian collusion" scandal meant to eventually lead to his impeachment. And all this has had the effect of turning "RESIST" into "REVOLT."

When Barack Obama was elected, the conservative half of the country didn't agree with his politics. They hated his policies and his executive actions. Obama's pat response to those who disagreed with his leftist goal of "fundamentally transforming the United States of America" was to say, "Elections have consequences." Yes they do. And guess what? It works both ways.

The difference is that the Republicans and conservatives didn't cry and riot in the streets when Obama was elected as the Democrats and the leftists did when Trump became president.

The conservatives didn't search out Obama cabinet members and surround them. They didn't scream at them in restaurants. They didn't go to their homes and disrupt their neighborhoods. They didn't scare their children or shout obscenities at their family members. They didn't act up. They voted in the midterms for change. They elected house members and senators who shared their values.

There's no telling how far the leftists will go.

As far as President Trump is concerned, I guarantee they won't let up until he is out of office one way or another. But besides that, how far will the national civil disobedience go? How long will the hysterical ranting go on by most of the media? How much more harassment of Republicans will the hoards of angry irrational idiots engage in before somebody gets seriously hurt? Who knows?

I know one thing; if the anarchists win, our country is lost.