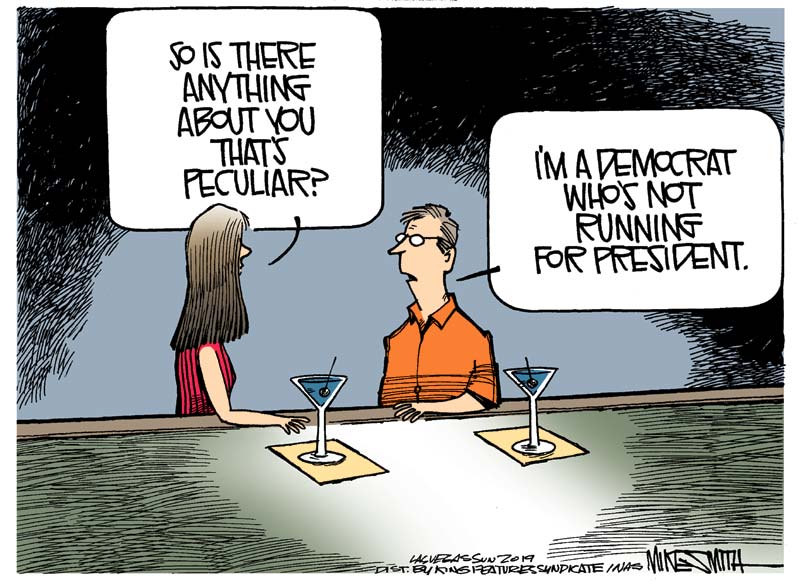 President Trump has given Joe Biden the nickname "Sleepy Joe," but most recently his reputation as a woman "toucher and sniffer" has resulted in many calling Biden "Creepy Joe." I don't really understand the tag "Sleepy" for Biden, (he looks more like Dopey to me) so I tend to go with the "creepy" moniker myself.

But then again when I observe the other Democratic candidates for president I'm inclined to label most of them "creepy."

I say this with all due respect. Or maybe not.

Let's start with "Crazy Bernie" as Trump refers to him. Be honest, Bernie is pretty creepy to look at and listen to, but he always has been. Take a look at Bernie Sanders' photos and film clips from decades ago. From the beginning the guy had the appearance of the Wild Man of Borneo. His hair is all over the place, his eyes are bugging out, and his speech style takes on that of the nutty drug-addled street person screaming in the park to anyone or to no one.

Next we have Elizabeth Warren. Now, honestly, tell me this woman doesn't creep you out. She also tends to scream out her speeches in Bernie fashion.

Although she has less American Indian in her gene make-up than General Custer (who had none) she continues to claim Native American heritage. She did an Instagram live stream broadcast of herself drinking beer in her kitchen to prove just how "normal" she is.

Ask yourself this, what do YOU do to prove that you're normal? The answer is probably nothing because real normal people don't go around trying to "prove" that they're normal.

Just the name Beto O'Rourke should be enough to qualify this weirdo as a bona fide creep. Imagine, an Irish-American with so little personal integrity and dignity in who he is, that he wants to be referred to with a Mexican nickname. Pandering to a minority voting bloc, he's like the male equivalent of Elizabeth Warren. Unlike Warren, however, O'Rourke seems to be bent on proving just how abnormal he is. He makes his speeches in local bars and restaurants by first jumping on a table (or the highest place he can get to) and flailing his arms all over the place. He eats dirt, I'm not making this up, because he claims it has regenerative powers. He even brings in dirt for his family to enjoy as well.

And then here is South Bend, Indiana Mayor Pete Buttigieg, the 37 year-old homosexual. Time Magazine recently featured Burrigieg and his "husband" on their cover labeling them "First Family." Buttigieg claims to be a devout Christian, starting out as a Catholic and eventually becoming an Episcopalian. I don't claim to be an expert, but I don't believe that traditional Christian bible teachings embrace homosexually as being a normal life choice. I know society has grown more inclusive to what used to be considered aberrant behaviors, but progressive political correctness has never been my thing, I'm afraid. So for me, this is just plain creepy.

Eric Swalwell is both creepy and scary because he refuses to take the truth for an answer. He has been caught lying on a consistent basis and spends his time in front of cameras berating Trump and all who have voted for him. He makes delusional claims that he has seen with his own eyes evidence of collusion between Trump and Russia, even though the two-year long Muller investigation found nothing of the kind. He has also said that he wants to see gun owners give up their weapons or go to jail. As I said, creepy and scary.

Kirsten Gillibrand, Cory Booker, Amy Klobuchar, Andrew Yang, and Kamala Harris all have their creepy issues. But what really makes all the Democrat candidates so creepy is that they are all spouting the same socialistic rhetoric and crazy ideas.

To a person, they embrace government freebies such as free college and free healthcare to all people who reside in this country, whether they are citizens or not.

(Of course there is no such thing as free anything from the government, American taxpayers will have to pony up.)

At the same time they are pushing for global warming initiatives, which would mean billions and billions in new taxes.

"Creepy" Joe? Yeah, but "Creepy" each and every one of them. What they say, and what they want to do to this country is the stuff that nightmares are made of. Bad enough when it was only Crooked Hillary and Crazy Bernie.