A Glimmer of Sanity 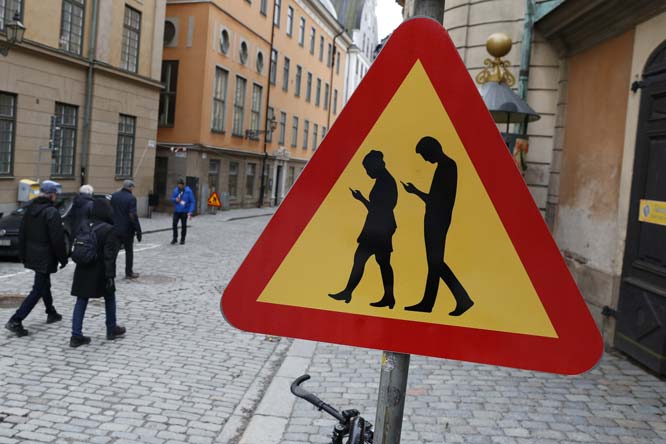 Sitting in my car in a shopping mall parking structure, next to the entrance, I watched as person after person walked from the structure into the mall each one holding an iPhone in their hand.

Some were talking into it, some were texting, and some were just looking at it as they walked. All teenagers, right? Wrong.

Most were older people, the majority of which were women. Many of them were really old. I'm talking senior citizen retired old.

Getting hooked on electronic devices is definitely not just for the youngsters anymore. Even people who are old enough to know better have disengaged from the real world to lose themselves into cyberspace.

Too many of my fellow Americans can't seem to be able to do anything or go anywhere without staring into their so-called smart phones.

People who walk through busy parking structures with their heads bent down into their devices while vehicles circle around and pull into and out of parking spots prove that the only thing smart about them are their phones.

Is it really that hard to put the thing down for the time it takes to walk into the store? Do they seriously need to text while they're driving or walking across the street? What's with these people?

Happily I read a couple of little news articles that may suggest that all is not lost. There may be some sanity left in our modern world after all.

The first piece is from The New York Times with the headline: "Coffee Shops Skip Wi-Fi to Encourage Customers to Actually Talk." Too bad Ripley isn't around to include this in his "Believe It Or Not" strip.

The article spotlights a downtown Toronto cafĂ© called HotBlack Coffee, which caters to the young hipster coffee crowd. The place offers their patrons just about everything you'd expect from your typical upscale coffee shop, everything except Wi-Fi.

The owner, Jimson Bienenstock, said the shop opened last year without Wi-Fi with the express intent of getting customers to talk to one another instead of burying their faces in laptops. "It's about creating a social vibe," he said. "We're a vehicle for human interaction, otherwise it's just a commodity."

Bienenstock has spent a lot of time in other countries and discovered that the practice of having customers set up makeshift offices, which rely on the free Wi-Fi in the coffee cafes, is pretty much a North American thing. He did what he did, he says, as a response to society's deep immersion into all things digital that leads people to seldom communicate face to face. I love this guy!

Customers initially were taken aback. They simply couldn't believe that a hip coffee spot would open without Wi-Fi. But some are fine with the concept, and now it seems patrons are divided between those who love it and those who hate it. It hasn't hurt his business, though. The place is buzzing with conversation.

"You'd have a hell of a time concentrating in our place because there's so much noise," Bienenstock said. "There's so many people talking to each other." Imagine that!

Other coffee shops have jumped on the no-Wi-Fi bandwagon as well, including some in the U.S. Could this be a growing movement towards re-engaging in our surroundings and communicating face to face with others? Time will tell.

Meanwhile, in another good news story, The Madison, Wisconsin school district is blocking students' access to social media sites at several schools during the school day as part of a pilot project aimed at re-engaging students.

School officials at East High School and Wright and Cherokee Middle Schools killed access to Facebook, Twitter, Snapchat and dozens of other social media sites on May 1, and West High School followed suit on the following Monday.

The plan is to track students at the schools through the end of the year to determine if the change made any impact on student behavior, academics, and school safety. This is a good move, but why the heck were students allowed to use social media at school to begin with?

There's no question that phones are a distraction to students in class and competes with the teacher for their attention. Hopefully this will take hold permanently, and in other school districts across the country too. Social media during school hours? Nonsense. Bad enough kids are involved in it when they're at home.

Kids need to know that there is more to life than what's contained within the screens of their electronic devices. And that goes for old codgers too.