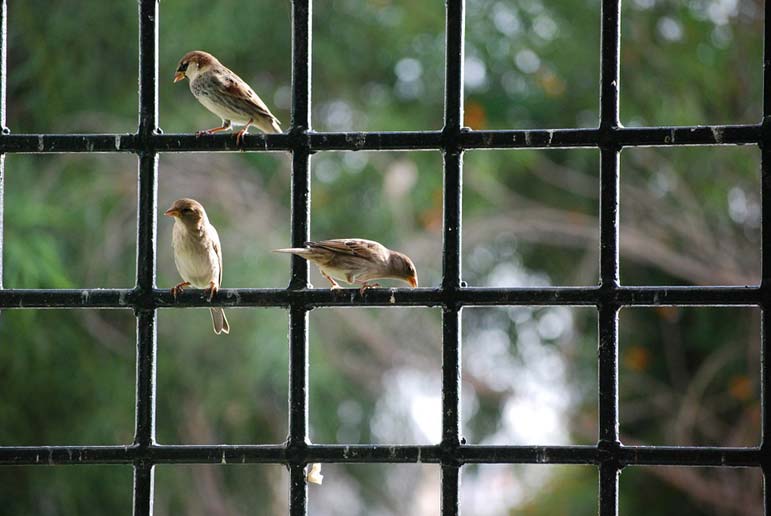 Spring has brought an unusual adjustment to our normally placid, humdrum domestic lifestyle this year.

Little brownish, grayish birds have decided to make a nest on a crossbeam directly over our front door porch. These small finches or sparrows or whatever the heck they are have made claim to our home.

We can no longer just open our front door whenever we want without thinking about it. Now we first peek out through the curtains on the glass part of the door and look upstairs to see if anyone's at home before we turn the knob, lest we frighten our little feathered friends.

We watched them build their nest. We saw mother bird sitting on the eggs. We heard the chicks cheeping after they hatched. We saw her feeding them. We saw father bird come to visit and do whatever father birds do at that point. All the while my wife and I kept as silent and careful as we could so as not to upset their applecart.

All of this might sound adorable to many, but it is an inconvenience and more than a bit nerve-racking to those of us who must live within these confines. We are literally being held hostage by these birds. These blasted feathered fiends are controlling our lives.

Each morning I tiptoed to the front door and peeked out the window to check the nest, making sure I wouldn't scare the little things before opening the door as slowly and quietly as possible to retrieve my newspaper. It was the same routine each afternoon after the mail was delivered.

When we had to leave the house to go anywhere we'd use the side door. We'd dread anyone coming to the front door. We told family and friends who were coming to visit to please use the side entrance.

Then, a few days ago, nest activity finally quieted down. We heard no more cheeping and saw no birds coming or going. Happily, we began to think that all concerned had flown the coop, so to speak.

But it was too good to be true. Although we haven't heard any cheeping, father and mother have returned to the nest. I didn't think they did that. I figured once the chicks had left the nest, that was the end of it.

Well, they decided to do it again. I guess we made our home much too accommodating for them to resist. Either that, or these are a pair of different birds that got the word that the Crosbys are easy marks.

The only saving grace has been that to date they haven't exhibited any aggressive behavior. So far we've been spared any Alfred Hitchcockesque attacks.


That's something, I guess. Some people in Florida haven't been so lucky. I read today that one woman in the city of Oviedo was taking out the trash when a hawk swooped down and attacked, leaving her bloody and wounded.

In an interview, Beverly Bonadonna said she saw the hawk out of the corner of her eye just before it attacked her. "...It hits me on the side of the head, not just hit, but grabbed, knocked me to the ground. I had to kind of shake my head loose. At that point, I started screaming for my husband ... then it flew away, it finally let go."

No attacks on children have been reported, but Mrs. Bonadonna isn't the only one in the neighborhood who got the Hitchcock bird treatment.

Neighbor Donald Cochran said he's been bombarded multiple times by the hawk. "He scratched me right in the back of the head, but if you weren't thinking about him, he could have knocked you down because he weighs about 5, 6 pounds.

Then I was hauling the trash out and he hit me coming out the sidewalk and then he come back off. He tried again but I jumped."

A nest is situated in one of the trees outside his home and he believes the hawks are trying to protect their young. Officials with the Audubon Center say that the best way to protect yourself from bird attacks is to avoid the area near a nest.

My wife and I have bent over backwards to be protective of the little peckers and now we find out we've been living in a potential war zone all this time!

I'm thinking we should just go to a motel until mating season's over, some place where I don't have to tiptoe to the front door. As it stands now, my house is for the birds.