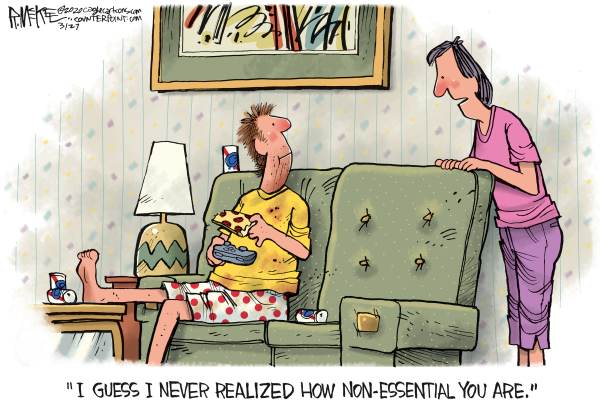 In "Animal Farm," George Orwell's allegory on the dangers of authoritarian governments, the pigs who are in control of all the animals, proclaim, "All animals are equal, but some animals are more equal than others." That line comes to mind when I hear today's leaders spouting off on essential workers verses nonessential workers.

And what are workers, anyway? Workers are simply people.

New York's King Cuomo mandated that all nonessential workers across the state stay home to limit the spread of the coronavirus. Essential workers include those who work in drug stores, grocery stores and of course government. California's west coast king, Gavin Newsom has ordered similar rulings, as have many other state and city tyrant wannabes across the country.

The problem with all this essential/nonessential business is much of it doesn't make sense. Why is it wrong for a small business owner of a clothing store say, or a shoe store to keep open as long as he practices safe distancing and proper sanitizing? All safety measures being equal, why is it safer to go into a supermarket or a liquor store than a church or synagogue?

In other words, he's saying that the job or business you had is not considered "essential" to the government, so if you want to feed your family and have a place to live then you'd better get a job that the government approves of or you're just out of luck.

It's more than insulting, it's downright scary. Los Angeles Mayor Eric Garcetti said he would use mobile phone data to track the movement of the citizens in L.A., promising to "hunt down" those who refuse to comply with his orders to stay indoors. I'm not making this up, those were his words.

Government has deemed it essential to stay in your house, sit on the couch and eat ice cream, but playing tennis or golf, or taking a walk on a beach or in the park is verboten. You can get marijuana but you can't get a haircut.

By the way, have you noticed that none of the politicians and newsreaders we see on television look like they need a haircut? Ever since barber shops and beauty parlors have been placed on the "nonessential" list, I've gotten to look pretty shaggy, but somehow the people in front of the cameras, telling us to shelter in place except to run out for medicine or bread, don't have a problem in getting their hair taken care of. Maybe some barbers are more essential than others depending on whose heads their working on.

Here's a thought; with every other epidemic, pandemic, and plague that has afflicted mankind throughout history, the first thing they did was to quarantine people who had the disease from the ones who didn't have it. Healthy people weren't shut away. How come with this one the HEALTHY ones are being isolated? Seems backward to me.

Another thought; when did "furlough" officially replace the term "layoff?" There are no layoffs anymore, everybody gets furloughed now. Who makes these language chances? And if I hear "We're all in this together" one more time I'll rip my mask off.

And yet another thought; with all the doctors, scientists and disease experts working on this world-wide pandemic all this time, how come we don't know any more about it then we did when it first started? We hear about ventilators and masks and gloves and death tolls, but we have no real answers except wash your hands, wear a mask, and do six feet of social distancing.

Don't be surprised if this is last time you will be reading my column. I could be identified as a "nonessential" columnist by the state authorities, and if so I expect to hear squad cars pulling up to my house. The Covid-19 Enforcers of the Essential could be pounding at my door at any moment to take me away with other nonessential people. In the world of Cuomo and Newsom I'm not essential at all.