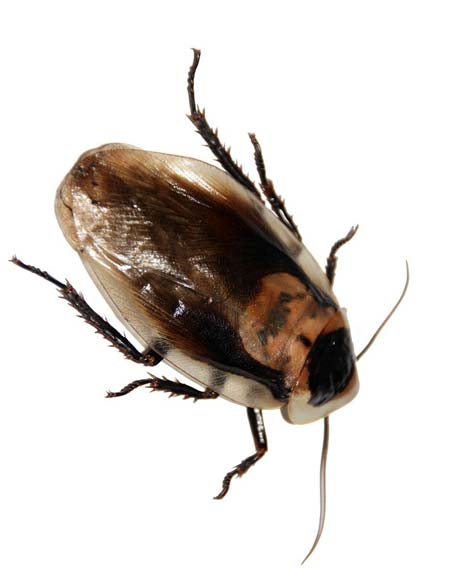 Okay, let's see if you can figure this one out, because it's way beyond my comprehension.

A recent article in The Wall Street Journal, a very reliable newspaper as I'm sure you know, has shed some light on why it is so hard to control the cockroach population. That would be cockroach, as in creepy, disgusting, dirty crawling things that have a tendency to overwhelm places that they inhabit.

The article gets pretty technical but let's cut to the gist of the thing.

Seems that a bunch of insect scientists at a university in Japan have conducted a new study that has unearthed (if you pardon the expression), new information on cockroach reproduction. The study group says that (big word coming up, get ready.) parthenogenesis, a form of asexual reproduction in which the females produce eggs without a male is more viable than they had thought for the American cockroach.

Not only can the girls make babies without the guys, but the offspring are themselves all female. The scientists say "the females get especially busy when they are living together in groups of three to five, perhaps because the females sense that their offspring will be safer with other cockroaches around.

"After producing their first egg case, containing 16 embryos, the females in groups took just 18 days on average to produce another case, compared with 27 days for females living alone."

The scientists tracked one group of cohabitating females for more than three years and saw the colony grow from 15 to over 1000 roaches. Doing just fine without the males around, thank you very much.

The article quoted a professor of entomology at North Carolina State University who said the study is important because it "suggests that infestations can be sustained without males." Hey, never underestimate the power of females in groups.

I suppose scientists have known for a long time that female cockroaches have the ability to give birth through parthenogenesis (without needing a male's input, so to speak), but it comes as news to me. So either I have never known about this at all, or if I ever did know, the illogic of the thing sent a shock to my system so severe that I've totally wiped it out of my memory bank.

The article, as upsetting as it was, got me thinking of our own modern human world. Men used to be the rulers of the earth for centuries, remember? But certainly not any more.

The women's role in the world has been growing exponentially for over a hundred years, ever since the women's suffrage movement began. Women's Lib in the 1960's accelerated the process; women in today's society are as powerful, sometimes more so, than men are in many aspects of daily life, including business, government, clergy, media, education, and wage earning.

Which gets us back to the cockroach. What if scientists could find a way of applying this parthenogenesis thing to humans? This could be what the women's liberation movement has been waiting for! At last, a way for women to reproduce themselves without the need of men! What's more, the offspring are only women!

Yahoo! NO MEN! It's perfect! What could be better than a world devoid of testosterone? No more dirty cigars. No more glass ceilings, just lots and lots of mirrors. Just think, girls won't have to pretend to like sports anymore. There will be aisles of makeup counters at the front entrances in every department store, and health and massage spas at every hotel.

Oh wait, there already are.

The point is that for many feminists, getting men out of the way is the way of the future. If not exactly eliminating them altogether, then at the least marginalizing them to the extent that they have little or no power.

After all, for many angry feminists, men are simply creepy, disgusting, dirty crawling things that have a tendency to overwhelm places that they inhabit.