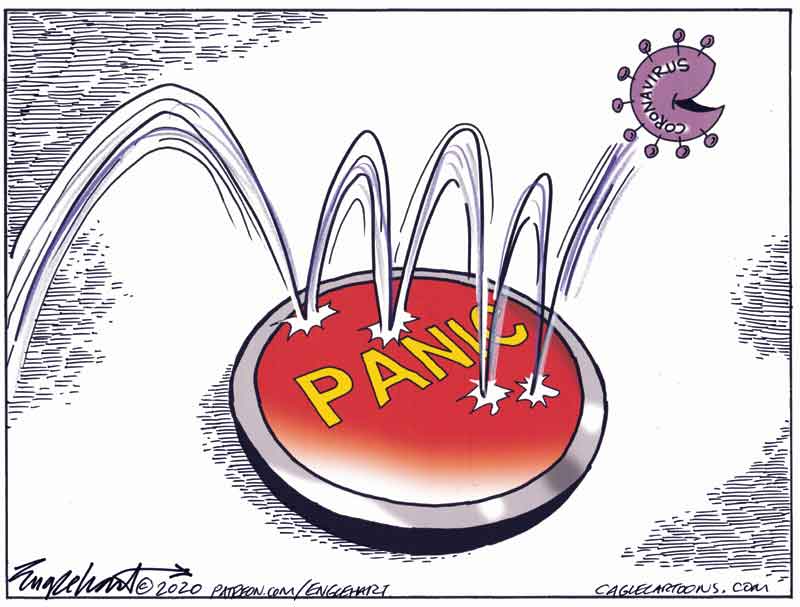 Hard to know where to begin this week.

As the pandemic of the coronavirus continues to spread, so spreads the pandemic of panic across the country. It appears that all the rules have been thrown out the window and almost anything goes. What is the correct thing to do? That depends on whom you listen to and when you listen to it. What they tell us to do today could be very different tomorrow.

The latest new directive is "shelter in place" which means stay home and don't leave for anything except for necessities. The San Francisco area has ordered it and New York is considering it. But what exactly constitutes a "necessity?" One man's extravagance might be another man's necessity.

I could argue that having a stiff drink in these hysterical times is a necessity to some of us who might benefit from the calming effects of a libation.

Los Angeles has mandated all restaurants to close indoor dining and only offer pick-up or delivery.

New York Mayor De Blasio has ordered all the bars and restaurants in the city on lockdown and if any of them so much as open their doors, the patrons and the owners will be arrested.

Have a meal, go to jail.

Meanwhile, Los Angeles is engaging in what they do best, stupidity.

The LA County Sheriff's Department is releasing inmates from its jails and cutting down on how many people it books into custody to protect those housed in close quarters from the growing coronavirus pandemic.

We certainly wouldn't want to expose our criminals to illness. That would be criminal-phobic. And what happened to "shelter in place?" I guess that doesn't include the place called "jail."

Sheriff Alex Villanueva said deputies and police officers across the county have been directed to cite and release people whenever possible, instead of arresting them, and to seek medical clearance before booking anyone who shows symptoms. Countywide, he said, arrests have dropped from a daily average of 300 to 60, while the jail population was reduced by more than 600 inmates. Well, that's perfect. Why don't we just release ALL the crooks and gang members into the general public, just to be on the safe side?

People are hysterically calling 911 to report hearing neighbors coughing or sneezing. Better do your sneezing as quietly as possible or you might have a visit from the local authorities. "Drop your Kleenex and come out with your hands up!" Excessive fear is one thing, but it should come as no surprise to anyone that people are losing it in other ways, like striking out against one another. Call it virus rage.

In one example, as reported by Reuters, a 65-year-old woman tried to break the monotony of days indoors on Sunday by going for a walk through her Brooklyn neighborhood. While she took care to avoid crowds, she was surprised to see a group of people in their 20s and 30s standing outside a packed restaurant. She said she was shocked and asked them if they were aware of what was going on. They instantly snapped back at her, "We are trying to have a nice Sunday, so why don't you just f--- off!"

While many are staying home, there appears to be a lot (mostly teens and younger adults) that are ignoring the warnings and going out anyway.

How many of them would still be out and about if medical experts started reporting that people in their teens and twenties have now been found to be THE MOST vulnerable to sickness and death by coronavirus?

It just might keep the whippersnappers off the streets at last.

It now should be obvious to even the least politically minded of us that anything President Trump does or says regarding this virus will be wrong as far as social media and the mainstream news media are concerned. If he tries to comfort us by saying, "Don't panic," then he's a denier, like the captain of the Titanic who ordered the crew to ignore the iceberg and continue full speed ahead.

If he implements strong counter-measures such as closing boarders and suggesting shut downs or suspensions of normal activities, then he's a Hitler, a xenophobic dictator. He can't win.

The CDC is telling us we haven't seen the worst of the pandemic yet, some experts say 86% of people with the virus are walking around undetected. They tell us this crisis could go on for at least 18 months. And one source has said that as many as 2.2 million Americans could die from coronavirus. Add to that the collapse of our economy and possibly the worst depression our country has ever had.

No one knows what the future holds at this point. But one thing is for sure, if we didn't need a lot of toilet paper before, we do now because this thing is scaring the cr-p out of all of us.