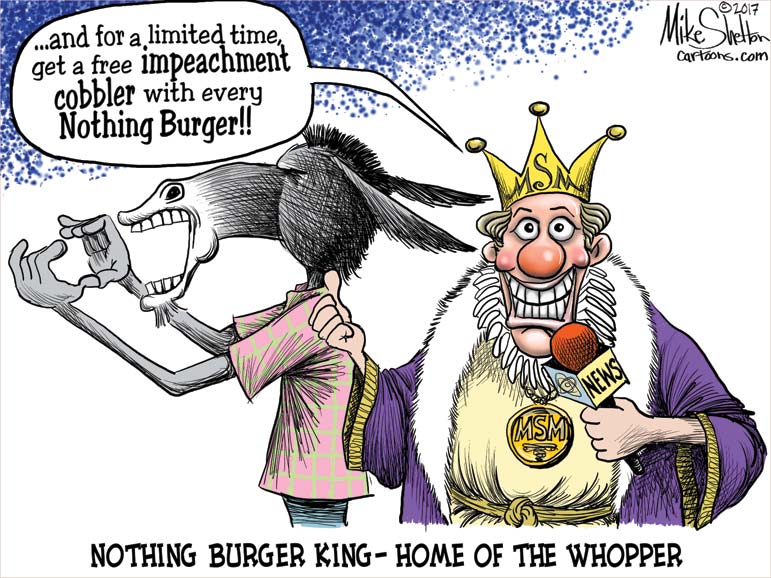 After more than two years of attempting to find "collusion" between President Trump and the Russians, the Democrats have nothing. Zero. Nada. Bupkis.

Of course the so-called investigation was never really about a Russia/Trump conspiracy, it was just an excuse to tarnish, humiliate, and destroy the man who beat their chosen candidate, Hillary Clinton.

They never got over losing and, as you might recall, the party leaders promised to "RESIST" the Trump presidency any way possible. That's one promise they're keeping.

Besides claiming he's a traitor to America, they've called him a racist, a homophobe, a Nazi, a womanizer, a senile old man, a crook, and anything else they could think of and they haven't let up yet.

Now that they have taken over the majority of the House, Democrats have set up multiple investigating committees to look into everything Donald Trump has ever done in his life, demanding his tax returns going back many years, and subpoenaing Trump family members, friends, business associates, and cabinet members. This is only the beginning they say, and I believe them.

Remember, as far as anyone knows, NO CRIME HAS BEEN COMMITTED. His political enemies are looking into the man's entire life to find something, anything that he has ever done wrong at any time, undoubtedly going back to his school years and throughout his business career. They figure if they search long enough and hard enough something will inevitably turn up. And how many of us could withstand that level of investigative scrutiny?

But here's what I don't get. How do you justify government investigations into a sitting president's life without solid evidence that a major misdeed or crime has been perpetrated? How do you justify throwing taxpayer money behind tearing down a president just because your candidate lost?

No other American president has ever undergone this level of Kafkaesque witch trial. Why aren't more Americans bothered that the Democrats (and the majority of the news media) are spending so much time and money looking for a crime, ANY crime that they can hang on President Trump so that they can either (a) impeach him or (b) discredit him so completely that they can win the 2020 presidential election?

Watergate was a major political scandal of the early 1970s, which was kicked off by a break-in by five men at the Democratic National Committee (DNC) headquarters at the Watergate office complex in Washington, D.C. It wasn't until after it was discovered that President Nixon's administration attempted to cover up its involvement that an investigation by Congress was begun. The crime came first.

Eventually the scandal led to the discovery of multiple abuses of power by members of the Nixon administration, then the commencement of an impeachment process against the president, and finally Nixon's resignation. But again, THE CRIME CAME FIRST. No one went after Nixon until the criminal act occurred.

Clinton was impeached in 1998 for perjury and obstruction of justice regarding his relationship with former White House intern Monica Lewinsky. Clinton's perjury and obstruction of justice was proven in a court of law, and both crimes are worthy of impeachment. The case emanated from Clinton's ongoing efforts to obstruct justice, which went back years.

Clinton misused public resources, repeatedly, to cover up misdeeds big and small. Among these many practices was the use of state troopers to help him procure, and hide, his voracious adulteries. Clinton was accused by multiple women of serious sex crimes but there were money scandals associated with him as well.

Investigators began seeing the multiple scandals and cover-ups as part of what amounted to a significant criminal conspiracy. Some of the same people covering up the financial shenanigans were covering up the trysts, with threats or illegal inducements coming from the same inner circle against potential whistleblowers about misdeeds both physical and financial. When private lawsuits related to sex were filed against Clinton, they touched on the same sort of potentially illegal obstruction of justice.

When Clinton lied under oath about his sexual dalliance with Lewinsky, and directed others to lie, he by ordinary standards had committed perjury and criminal obstruction of justice. The House, acting as the equivalent of a grand jury issuing the constitutional equivalent of indictment of a president, was right to impeach him. Once again, the crimes surfaced first, then came the investigations into them, which led to impeachment.

But now we have a situation where a major scavenger hunt is being pursued against President Trump without a shred of evidence that a crime was committed. The Dems want to get him on something and they won't stop until he is either dead or out of office.

It doesn't shock me that the Democrats and their partners in the media are this vindictive and destructive. What does surprise me and saddens me is the fact that so many of my fellow Americans seem to be accepting of it.