Why is the U.S. Going Socialist? 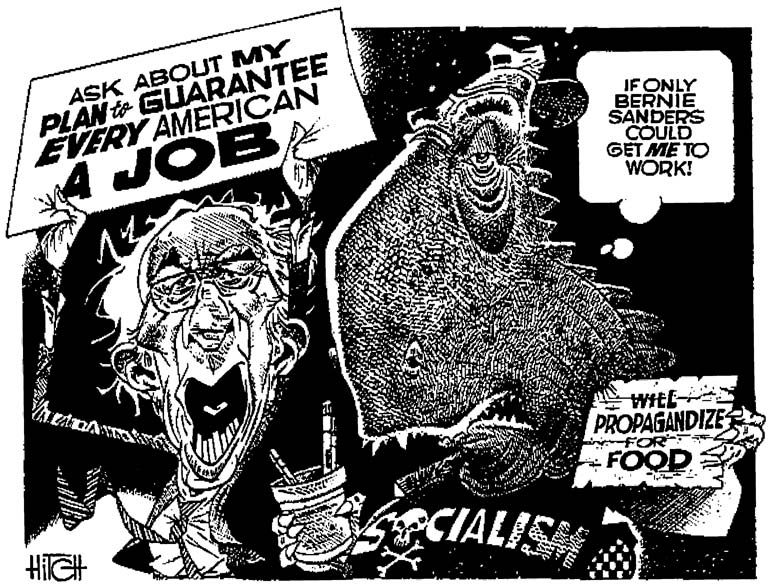 Many people are scratching their heads and wondering why it is that socialism has become so popular in our culture today.

One poll shows that among Democratic primary voters 45 years old and under, 45% preferred socialism to 19% for capitalism.

There is little doubt that the progressive left has gotten a solid foothold in our society.

Government control of all aspects in our daily life, cradle to grave as they say, is the goal of progressive socialists such as New York congresswoman Alexandria Ocasio-Cortez and Sen. Bernie Sanders.

With promises of free college tuition, government welfare for anyone who can't or doesn't want to work, and socialized medicine, America, once the land of the free is fast becoming the land of the "free stuff for all." What happened?

What happened is this: two or three generations of Americans have been brainwashed.

Thanks to left-wing academia (and that would be not only colleges and universities, but most public schools as well) kids by and large have heard and been taught primarily progressive ideas and revisionist studies.

Lessons layered in multiculturalism, diversity, identity politics, feminism, and liberal ecological mantra are celebrated while at the same time the teachings, accomplishments, and the history of white Western Civilization are given a negative spin, diminished and revised through a leftist prism.

Remember, in the leftist playbook capitalism and democracy is the system of government developed by evil white male slave-owners who brought disease and death to the native peoples of the Western Hemisphere.

White males used imperialism to enslave all other people on earth (including their own women) and continue to wield their "white privilege" "toxic male" power over the rest of humanity to this day.

And all of that is reinforced by the liberal mass media. A constant barrage of progressive thinking brought to us daily by the press and entertainment industries in the form of movies, television, music, publications, and so-called newscasts.

The politics are not always obvious, but they are always there. When the vast majority of journalists -- especially those at the highest ranks of their profession -- are much more liberal than the rest of America, you know you've got news bias. And Hollywood just can't seem to make a movie today that doesn't have a left political message in it somewhere.

The fact that so many Americans grow up without religion these days is another factor in the rise of socialism. Someone once said, "When people stop believing in G od, they don't believe in nothing --- they believe in anything."

I never thought I'd say this, but even organized religion is leaning to the left in our country today.

Many churches have adopted a liberal approach to religious teachings. You even see it in the Catholic Church. Of course the reformed and ultra-reformed denominations of Judaism have always had a liberal bent, but now even some so-called conservative Jewish temples have gone that route.

So why has organized religion become more liberal?

One big reason is women. As women have become more and more the leaders of religious congregations, those congregations have become less bound by traditional doctrine and have taken a far more liberal attitude towards observances and sacraments.

It appears many of our religious leaders consider being in line with popular culture and liberal politics more worthy than upholding their own biblical teachings.

It's all idealistic wish fulfillment. The perfect Big Brother government who will see to all of our necessities and desires.

Vote in socialism and we'll have clean earth and clean air. We'll have free housing, free education, free food, free healthcare, and freedom from having to work for a living.

There'll be complete diversity because it will be government mandated and enforced. Every city will be a sanctuary city, and no more borders to hold back our brothers and sisters from other nations. Capitalism is so yesterday, and socialism is so cool.

But try asking anyone who has actually lived under a socialist government regime just how cool it really is.

Unfortunately young socialist-leaning people won't do that. They don't think that deeply. They don't ask the serious questions, like who pays for all the free stuff?

And if socialism is so wonderful, how come it has never worked in any country where it has been established?

President Trump has stated that the United States will never be a socialist country. I hope he's right, but just saying that will not insure it.

Clearheaded Americans who honor our founding fathers and believe in our capitalistic form of government had better wake up to what is being indoctrinated into our children. We'd better make some changes in our schools and textbooks.

Otherwise some day we could end up with President Ocasio-Cortez standing before us promising that the United States will never be a capitalistic country again.