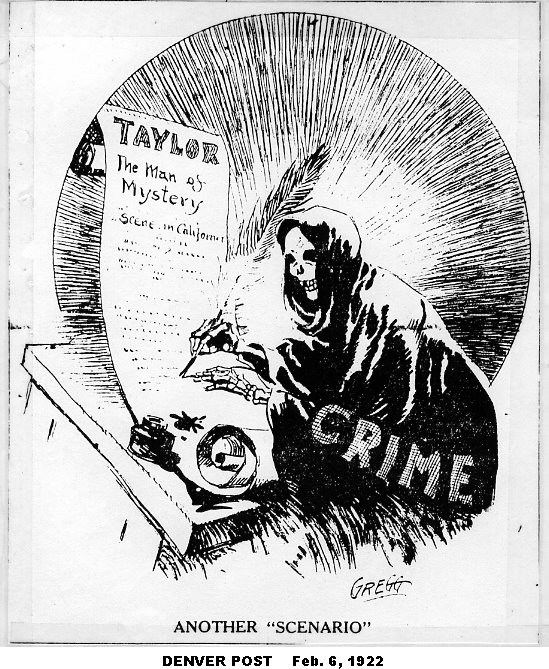 I'm in the middle of reading an engrossing murder mystery. Mysteries are generally not my usual choice of reading matter (except for the old, hard-boiled Raymond Chandler/Dashiell Hammett noir classics).

Mostly I read history, bios, social and political commentary, current events and essays. But the book I'm into now is a real page-turner, as they say. It holds fascination for me on a couple of levels. First because not only is it a well-written suspenseful noir-style mystery, it also happens to be a true story.

Secondly, it's historical --- taking place in Los Angeles over 90 years ago. And lastly, it is an unsolved Hollywood murder story involving people at the highest levels of the movie industry. Pretty juicy stuff.

The book, published last year, is called "Tinseltown" and it concerns the events leading up to and surrounding the mysterious murder of silent screen director William Desmond Taylor.

The case has remained unsolved since 1922. Author William J. Mann reopens the case, presenting it in a haunting, involving way, which reads like detective fiction. Dust jacket blurbs suggest that Mann offers a solution to the mystery, but since I'm only a little past half way into the book, I don't know whom of the several suspects it will be yet. Stay tuned.

William Desmond Taylor was born in Carlow, Ireland in 1872 and came to USA in 1890. He worked as stage actor, engineer, antique dealer, and even a gold miner for a while. Taylor entered the silent movie business as an actor in 1912; his most noted acting role was Captain Alvarez (1914) for Vitagraph. He directed his first film in 1914, working for a wide variety of studios including Fox, Famous Players-Lasky, Select, Realart and Paramount. Among the stars he directed were Mary Pickford, Dustin Farnum, Constance Talmadge, Wallace Reid, and Mary Miles Minter. He served as president of the Motion Picture Directors' Association for three terms. His pictures included Davy Crockett (1915), Tom Sawyer (1917) , Anne of Green Gables (1919) and Huckleberry Finn (1920) among others.

It is generally acknowledged that the William Desmond Taylor murder was one of the first, along with Virginia Rappe, in what would become a line of Hollywood unsolved (or questionable) murders. Some others include Thelma Todd, Elizabeth Short (the Black Dahlia), Bugsy Siegel, George Reeves, Marilyn Monroe, Johnny Stompanato, Ronni Chasen, Bob Crane, Natalie Wood, Peter Ivers, Jack Nance, Tupac Shakur, and David Caradine. Granted, not all of these deaths occurred in Hollywood proper, but all have the Hollywood stigma. Los Angeles is the land of bright sunshine, warm temperatures and laid-back life-styles. It's the place of the dream factories, glamorous movie stars, and the promise of success and riches. So why does such a place also bring to mind a dark, shadowy, sinister underbelly?

Hollywood. Los Angeles. There's just something about this place that one associates with mystery, decadence, and darkness. More than any other city Los Angeles connotes noir. Why is that? You can't blame it on show business. New York has always been the mecca for actors and show business in America and yet for some reason it doesn't have that dark, noir aspect that LA possesses. For a town that Raymond Chandler once described as "lost and beaten and full of emptiness", "a neon-lighted slum" and a place "with no more personality than a paper cup," LA for better or worse has its own dark, seductive character. And that brings us back to "Tinseltown."

I find myself deep into 1922 Los Angeles riding along with detectives, movie stars, and moguls during the time what the subtitle of the book calls, "Murder, Morphine, and Madness at the Dawn of Hollywood." The tinseltown of 93 years ago is surprisingly not so far removed from today's nihilistic and narcissistic movie industry. Just as today, there was plenty of depravity, ego, and self-indulgence to go around.

But as a read, it's all very intriguing. Beyond the murder, I'm pulled in by the times. Los Angeles' Westlake Park (what we know today as MacArthur Park) back when 6th and Alvarado was fashionable; Downtown LA when it was the main center for theaters and shopping; and the Sunset Strip when it was populated by poinsettia fields and avocado groves.

I suppose in the end it really doesn't matter who killed William Desmond Taylor. Not any more. In any case, we'll never know for sure. What was once a scandalous murder mystery has now become just another part of the mythology of Hollywood.

File it under chapter one in the ongoing saga of Los Angeles noir.