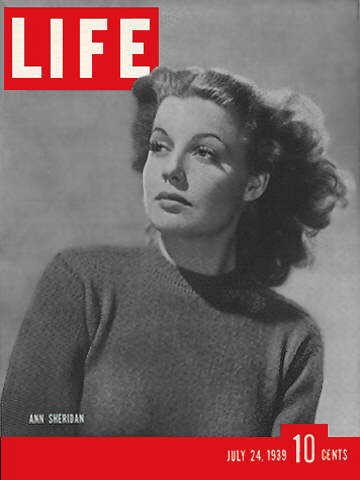 Once upon a time, long, long ago, when a movie came out in theaters it played for a week or two then disappeared. After several years a movie might be re-released, but not very often. Then along came television and suddenly we could watch old movies on local TV stations, although we were at the mercy of station programmers as to which picture we could see. In the 1980's home video tape finally gave movie fans the chance to see their favorites any time they wanted for the price of a VHS machine.

If you've never seen "The Oomph Girl" on screen you've missed out on a pretty slick chick that possessed enough "oomph" to qualify her as one of the favorite pinup girls of the 1940's. Clara Lou Sheridan was born February 21, 1915, in Denton, Texas, the youngest of five children. She described herself as a tomboy and was very athletic, playing on the girls basketball team for North Texas State Teacher's College, where she was studying to be a teacher.

Her sister thought her beautiful enough to send in a picture of Clara Lou in a bathing suit to Paramount Studios who was holding a contest called the "Search for Beauty." She won and was given a screen test after which she was signed to a contract at the age of 19. Her first film was the prize: a bit role in "Wagon Wheels" (1934). She left Paramount in 1936 and signed with Warner Brothers, ultimately changing her name to Ann Sheridan.

It wasn't until 1938 when Ann landed the role of Laury Ferguson in "Angels With Dirty Faces" that she finally had a part that was more than a bit and one that got her some real recognition. She soon became one of the most glamorous and sexy women in Hollywood, known as the "Oomph Girl," (a nickname she hated) and receiving as many as 250 marriage proposals from fans in a single week. She was named Max Factor's "Girl of the Year" for 1939.

Besides being great to look at, she possessed one of the greatest assets for a movie star, believability. She was also versatile, as were many of the Warners contract players of the time, although in the beginning especially, they tended to cast her as lower class, poor working girls. Ann could jump from musicals to screwball comedy to social drama and was terrific in all of them. Whatever picture they put her in, the public loved her and before too long the critics began to take notice.

A personal favorite of mine is the little known musical/gangster picture, "It All Came True" (1940) co-starring Humphrey Bogart. Another fun one is "George Washington Slept Here" co-starring Jack Benny from 1942.

Some of her best performances include "Dodge City" (1939) with Errol Flynn and Olivia de Havilland; "Torrid Zone" with James Cagney and "They Drive by Night" with George Raft and Humphrey Bogart (both 1940); "The Man Who Came to Dinner" (1942) with Bette Davis, and "Kings Row" (1942), in which she received top billing playing opposite Ronald Reagan, Robert Cummings, and Betty Field. She was also unforgettable and never more alluring in two of her biggest hits, "Nora Prentiss" and "The Unfaithful," both in 1947.

She starred with Cary Grant in the Howard Hawks screwball comedy, "I Was a Male War Bride" in 1949, but sadly her career went into a decline in the fifties. She made a pretty good little film noir called "Woman on the Run" in 1950 opposite Dennis O'Keefe, but after that her best movies were behind her.

In the mid-sixties she appeared in the TV soap opera, "Another World," and then in 1966 she starred in her own series, a western comedy "Pistols and Petticoats." Just when it looked like her career might be on the upswing, she became ill during the filming, and died of esophageal and liver cancer on January 21, 1967, just one month before her 52nd birthday.

Ann Sheridan died too soon, but the good news for movie fans is that she left a wonderful legacy and the best of it is widely available from a variety of sources. If you haven't seen her films, check out her work from the late 30's through the 40's and see for yourself why she was known as the "Oomph Girl."