I'm Gonna Git Me a Beer 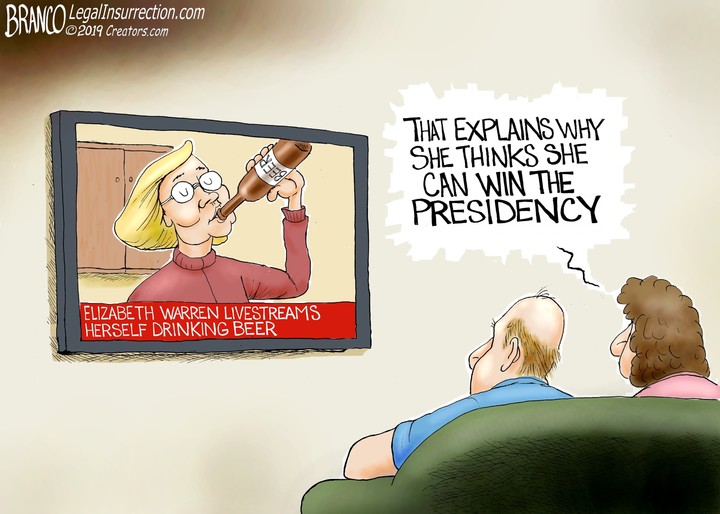 Just how stupid do some politicians think the American people are?


Pretty stupid, it seems. Like when you watch Senator Elizabeth Warren just hangin' out in her kitchen at home doing an Instagram livestream broadcast and suddenly she looks into the camera and says, â€˜Hold on a sec, I'm gonna git me a beer.' Hahaha. Really?


So we're supposed to believe this is the "real" Elizabeth Warren. This is the way a multi-million-dollar Cambridge law professor really talks when she's just kickin' back at home, right?


How insulting can you get? Warren is trying sooo hard to be sooo authentically down-home that she comes off as the phoniest politician since Hillary Clinton stood up in front of a black crowd in Selma speaking in a Negro dialect.


Or when Joe Biden did the same thing at a different time ("They're gonna put y'all back in chains").


Or when John Kerry put on a full camouflage outfit while toting a rifle out in the country for the cameras. He never hunted in his life.


How out of touch can you be to actually think you can fool people into believing you're "one of them" by faking the way you live or talk? People know when they're being pandered to; they can see right through it.


Remember she claimed to be a Native American Indian, and in reality she has about as much Indian blood as I do or just about any white person does.


But there she is, bigger than life poppin' a brewski, leaning across the kitchen counter. "See? I'm just like all of you little people out there in Instagram-land," she seems to say. Oh yes, Liz, we believe you. But now the question is, what more will she do in her attempt to show Americans how "real" she is? After all, some us may not be convinced yet.


Here's an idea, in her next Instagram livestream broadcast I suggest they open with a shot of her out in the backyard with her dogs. (I don't know if she actually has any dogs, but it's no big deal if she doesn't, we can rent some for her to use during the broadcast.)


There she is, just frolicking with the puppies, throwing tennis balls and talking baby talk to them. Then she happens to look over at the camera. "Oh! Hi there, or as we say back home, "How. I'm just tossin' them balls around for muh doggies here in the yard." (She throws a ball) "There ya go, Geronimo, go get it, boy!"


(She looks off camera and sees something. She turns back to the camera and looks at us with concern.)


"Uh, oh! I think Hiawatha had a poo-poo accident! Wait, I'm gonna have ta get me the pooper scooper and take care of this dang thing."


"Lookin' out at the yard like this, reminds me I been meanin' to re-sod the ground this spring. Yep, I gotta get me over to the nursery afore too long. I just love workin' the soil with muh hands! (Takes a big breath) "Geeze, ya know what, there's nothin' like a afternoon out here in the backyard to build up a mighty heck of a thirst. Guess it's time to grab me another cold one."


She walks off camera towards the backdoor as the dogs follow behind yapping happily.

Another good Instagram for Liz might show her power washing the house or fixing the bathroom plumbing, or maybe cooking up a batch of her family's special Cherokee cornbread from her Pow Wow Chow cookbook. (That's not a joke --- she really put out a cookbook with that title.)


When we see phonies like Warren and so many other politicians, is it any wonder why Donald Trump got elected president? Say what you will about him, at least he's real.


He is what he is, not what he wants people to think he is.