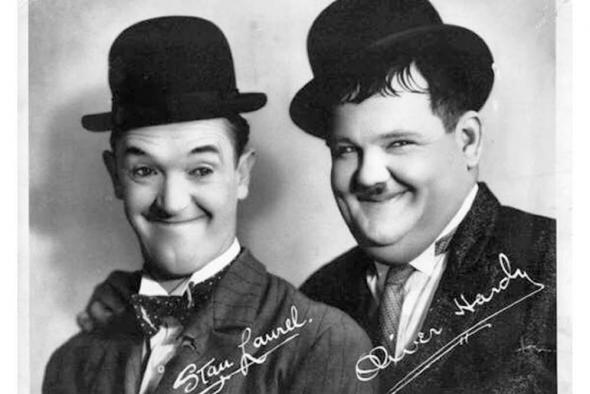 One of the sweetest little movies to come along in the last several years is "Stan and Ollie."

It is a loving tribute to America's greatest comedy team, Laurel and Hardy.

This isn't a movie review by the way, just an observation by someone who grew up watching their pictures on TV and has been a huge fan of Stan and Ollie all of his life.

My father introduced me to Laurel and Hardy. I still remember the joy of sitting on the couch with my dad on Saturday mornings watching their films on our small screen television and taking as much delight in my father's reaction to them as in the movies themselves.


Dad really loved them and I got such a kick watching him break up over Stan's comedy bits.

It didn't take long before I loved Laurel and Hardy too. Even at that early age I got the humor and picked up on the relationship of the team, who were much more like children than adult men.

As I got older my appreciation of them increased. Watching the comedy timing of Laurel, the little side glances into the camera of Hardy and the total innocence in their motives and approach to life is still a delight to this day.

Although it's been close to ninety years since they made their classic films their humor hasn't dated one iota.

Of course southern California streets, cars, hairstyles and clothing have changed, but that's about it. The team is as fresh today as they have always been, the relationship as rock solid and real as it was eight-five years ago.

What makes Laurel and Hardy such an enduring team goes far beyond the humor and gags. It's all about their personalities, together and separate.

Each of them had a screen persona that is at once believable and lovable to an audience.

You never get the sense that they are faking it, "putting it on" for the cameras.

Although they "relate" to the camera (audience) every now and then by looking directly into the lens, it is the screen characters that are doing so, not the actors.

Unlike so many of today's comedians, they never step out of character, they never "wink" at the audience as if to say, "yes, we're only pretending to be idiots, we're not really like this at all."

Coming off "cool" to their audience wasn't the point. They were concerned with being Laurel and Hardy on screen. Period. And that's a big part of their appeal.

The Laurel and Hardy movies never dealt with politics or current events. The humor was never nasty, let alone vulgar. The pictures stand up so well today because they weren't wedded to any particular time period or even a particular place.

Believability, I keep coming back to that word. Stan and Ollie portrayed a believable innocence between themselves and in everything and everybody they encountered. They were little boys with good intentions who, through no fault of their own, continually got into messes. And although Stan was a constant source of aggravation to Ollie, when the chips were down he cared deeply for him. They cared deeply for each other. You could feel that.

The movie "Stan and Ollie" focuses on that strong bond, the caring for each other that was so palpable in the screen characters of their old films.

Beyond the great acting, the amazing make-up and prosthetics, good art direction, and sensitive storytelling, the picture highlights the love and respect that the two of them had for each other in real life. Of course nobody knows what Stan Laurel and Oliver Hardy really said to each other in private, or any behind the scenes conversations they may have had with anyone concerning their career and business matters.

But none of that is the point. It doesn't matter. "Stan and Ollie" is a valentine to two giants of movie comedy.

A long, long overdue tip of the derby to the boys who made my father laugh so hard on those Saturday mornings 60 years ago and showed me what funny was all about.