Horowitz report finally unmasks Adam Schiff. Who's going to call him out on his lies? 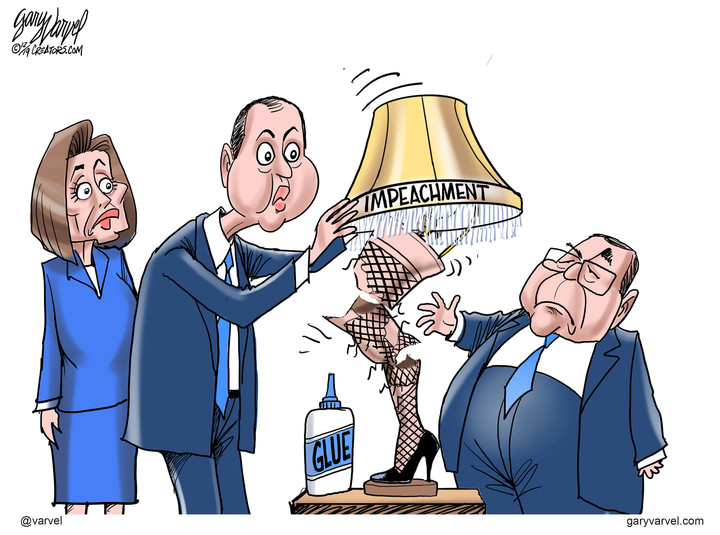 Now that the Horowitz report is out, revealing all those lies told by the FBI as it worked to hamstring a presidency with a debunked Russia collusion theory, here's a question:

Where do U.S. Rep. Adam Schiff — the Inspector Javert of Trump Impeachment Theater — and Schiff's eager handmaidens of the Washington Democratic Media Complex go now to get their reputations back?

Nowhere. There is no place for them to go.

It really doesn't matter where Schiff goes. The Democratic chairman of the House Intelligence Committee will be blamed when impeachment boomerangs on the Democrats.

Schiff's Washington Beltway establishment media enablers, those who've carried his water for years, may ignore the impact the Horowitz report has on Schiff's reputation.

They might just spin it all away. And the more witless among them have already reverted to their default positions: tribal hooting, while comparing anyone who disagrees with them to Hitler. If you want the short version, just scroll through Twitter for the angry disembodied cartoon heads.

But there are many intelligent, thoughtful liberal members of the press who, when it comes to Schiff, must be thinking, "My G od, what have I done?"

Because if there's one thing that comes through in the report from Obama-appointed Department of Justice Inspector General Michael E. Horowitz, and from his testimony on Wednesday before the Senate Judiciary Committee, it is this:


Schiff is a dissembler, a prevaricator, a distortionist, a spreader of falsehoods. In Chicago we use the short word: liar.

It was Schiff who insisted all along that FBI and Department of Justice officials did not abuse the FISA (Foreign Intelligence Surveillance Act) courts or hide information from judges.

But according to Horowitz, that's what the FBI did.

The "DOJ met the rigor, transparency and evidentiary basis needed to meet FISA's probable cause requirement," insisted Schiff, chairman of the House Intelligence Committee, in a 2018 memo that should be carved in marble.

But the FBI didn't meet those rigorous standards. It didn't offer transparency. Officials hid evidence from the court, or fabricated evidence to get what it wanted.

It was Schiff who insisted that the FBI didn't heavily rely on the so-called Steele dossier, the salacious Democratic Party-paid-for oppo research against Trump.

But Horowitz shows that the FBI relied heavily relied on the salacious dossier — and even made up evidence to keep the dossier useful before the courts, though key officials knew that what was in it wasn't true.

We now know from the Horowitz report that the dossier played a "central and essential role" in obtaining warrants to spy on the 2016 Trump campaign.

We also know that Schiff lied to the public about what had happened, as his media handmaidens protected him and trashed his fellow House Intelligence Committee member, U.S. Rep. Devin Nunes, a California Republican, who try to warn the country of the FISA abuse.

Why is FISA abuse relevant beyond whether Trump wins reelection or not?

Because faking evidence and lying about it to the courts to continue receiving surveillance warrants on Americans is a threat to all our liberty.

The FISA abuse also weakens Congressional support for the FISA court, which has been used in terrorism investigations. I don't like secret courts. And I don't like putting courts in an oversight role over the executive branch, a job that properly belongs to Congress.

But there are bad actors out there who want to kill Americans, and such courts can be necessary. And for the FBI to create a climate where these law enforcement tools could be thrown out is unconscionable.

When the Horowitz report was released a few days ago, some media and Democrats claimed it was a vindication for the FBI, because he did not find that the Russia-Trump investigation was a political hit job ordered from on high.

Some of the headlines I read as the report was about to be released were quite ecstatic, almost giddy.

So was former FBI boss James Comey. He prattled on in an emotionally turgid Washington Post op-ed bragging that he'd been vindicated.

Yet in an exchange Wednesday with Senate Judiciary Chairman Lindsey Graham, R.-S.C., Horowitz said his report vindicated no one.

"The activities we found here don't vindicate anybody who touched this," Horowitz said.

Did Comey touch it? Or is he such a Washington silkie that he would know how to avoid direct responsibility, but be able to smile the moment an underling else slips in the knife?


Horowitz could only interview current FBI and DOJ employees. Determining who slipped in the knife wasn't Horowitz's job. That is the job of respected U.S. Attorney John Durham, who is conducting a criminal investigation as to how this all began.

Durham was asked to do that job by Attorney General William Barr, who doesn't agree with Horowitz that there wasn't any political motive in the FBI for what happened.

"I think our nation was turned on its head for three years based on a completely bogus narrative that was largely fanned and hyped by a completely irresponsible press," Barr told NBC. "I think there were gross abuses â€¦ and inexplicable behavior that is intolerable in the FBI."

And Schiff preens, makes speeches about virtue and shows no shame. Who's going to call him out on his lies?