A Biden-Romney Ticket? Say It Ain't So, Joe 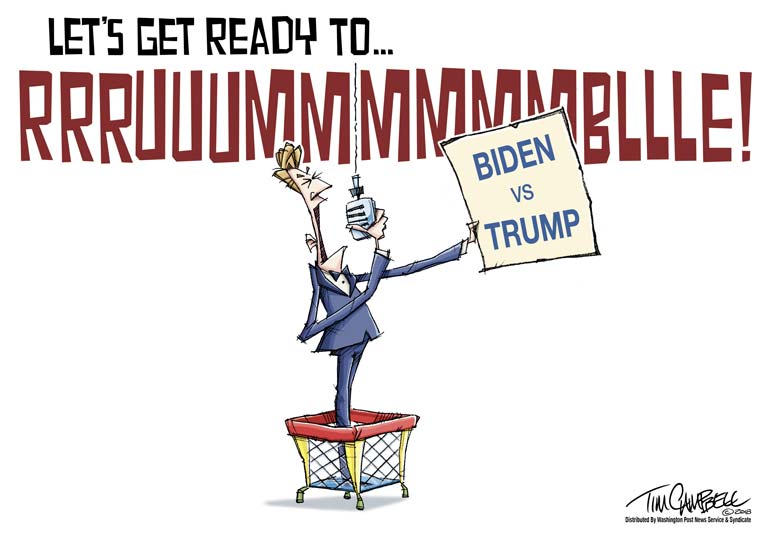 For a guy who hasn't indicated what his plans will be in 2019 and beyond, Joe Biden's a done a good job of staying in the news.

This very early Iowa poll has Biden as the frontrunner in that caucus state (the same poll, done in late 2014, had Jeb Bush in the pole position).

Biden reportedly is talking to friends and supporters about whether, at age 76, he's too old to seek the Democratic nomination (in 2016, a 70-year-old Donald Trump defeated a 69-year-old Hillary Clinton).

Just the other day, Biden advisors floated the idea of a 2020 ticket featuring Biden and Texas wunderkindBeto O'Rourke (why O'Rourke would settle for the consolation prize when he's rising to the top of 2020 polls is anyone's guess).

And there's this idea drifting around the Internet (floated by a longtime Republican operative, no less): a bipartisan fusion ticket pairing Biden with Utah Sen.-elect Mitt Romney, the last Republican presidential nominee before Trump.

Such a ticket wouldn't lack for experience. Between them, Romney and Biden account for 41 years in federal and state government (and counting, once Romney goes to Washington) plus six presidential campaigns (two Biden, two Romney, two Obama-Biden).

But let's consider the feasibility of such a pairing, beginning with the nuts and bolts of the operation.

What exactly do the two veteran pols have in common, other than a deep dislike of Trump? This would be the same Biden who once ridiculed Romney for looking at the world through a "Cold War prism." And it's the same Romney who slammed Biden's claim that Republicans wanted to enslave black voters as "demeaning to the office of the White House."

How exactly would the new administration operate? It's hard to imagine Romney cutting a deal without a guarantee of a healthy portfolio (maybe he should watch Viceover the holidays). What would Joe cede to Mitt other than funerals and a great seat at the State of the Union Address? Foreign policy? Domestic policy? Judges? Cabinet picks? Running the Easter egg roll?

Of course, this is predicated on the notion that a Biden-Romney ticket could actually win. Here, it's hard to see a path to victory absent both a titanic meltdown on the part of Trump — per the latest Fox News poll, he has an 88% approval ratings among Republicans; 91% among 2016 Trump voters — and the Democrats nominating someone to the left of Alexandria Ocasio-Cortez.

Presidential elections are determined by quality, not quantity — not the total number of voted amassed (Trump is the fourth president to have won a national election while losing the popular vote), but where those votes exist.

To win as a third-party entity, Biden-Romney would have to all but run the table as follows: the nine states that Trump and Clinton won by 3% or less (Colorado, Florida, Maine, Michigan, Minnesota, New Hampshire, Nevada, Pennsylvania and Wisconsin); the four they carried between 3%-6% (Arizona, Georgia, North Carolina and Virginia — plus Nebraska's 2ndCongressional District); four others where the spread was less than 10% (Iowa, New Mexico, Ohio and Texas).


California's 55 electoral votes does the trick. But this is a nation-state that's becoming more progressive, not less. Arguing that the Democratic Party has gone too far left wouldn't resonate. Moreover, what are the odds that California's long list of presidential wannabe's — Gov.-elect Gavin Newsom, Sen. Kamala Harris, Los Angeles Mayor Eric Garcetti — would buck the party by backing Biden-Romney?

However, the problem with this would be the temptation to emphasize Biden over Romney in states that traditionally are deep blue. That could create a boomerang effect in the likes of Ohio and Texas, which culturally are right-leaning and whose first question likely would be who's in charge of Supreme Court appointments.

So there's your scenario for a third-party victory in 2020, based on the most competitive states in 2016. Biden and Romney could win with a minimum of 18 states assuming they could work their magic in California (19, if the Golden State's not in play).

But that requires the insurgent ticket not only to have the resources to flip the nation's most populous states, but also the political dexterity to balance the competing interests of 10 red and at least eight blue states. It's convincing those red states to put their faith in Barack Obama's biggest cheerleader, while telling the blue states that the same Mitt Romney whom the Obama-Biden tried to dehumanize in 2012 isn't such a bad guy after all.

To borrow a line from A League Of Their Own: if it were easy, everyone would do it. And as past third-party efforts have shown, it's not easy playing the role of political insurgent.

In 1924, Wisconsin Robert La Follette won 16.6% of the popular vote but only 13 electoral votes (his native state).

What Perot and Nader did accomplish was playing the role of a spoiler. It made their runs historical. It also meant their campaigns were failures, if the goal was occupying the Oval Office, not reconfiguring the electoral map.

And at this point in their careers, the last thing Joe Biden or Mitt Romney should invest in is losing.