Toyota wants to put a robot friend in every home 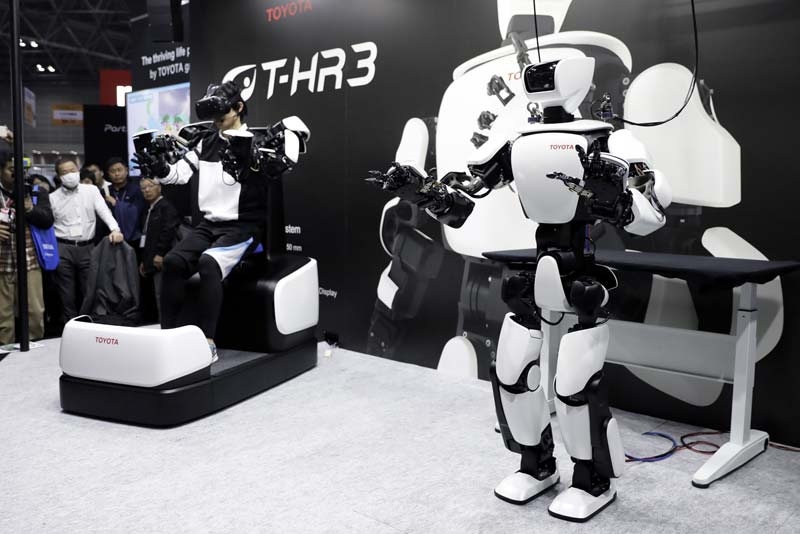 Toyota Motor Corp. has sold enough cars to put one outside every Japanese home. Now it wants to put robots inside.


Well-known for its automated assembly lines, Toyota sees a not-so-far-off future in which robots transcend the factory and become commonplace in homes, helping with chores -- and even offering companionship -- in an aging society where a quarter of the population is over 65 and millions of seniors live alone.


Machines have become much smarter in the last decade or so. Yet, every attempt to build one that can do simple things like load a washing machine or carry groceries encounters the same basic, physical problem: the stronger a robot gets, the heavier and more dangerous it becomes. What Toyota has going for it are $29 billion in cash reserves, a new artificial intelligence research center and a well-respected inventor, Gill Pratt, heading its effort.


"This is a company with so many resources that you can never ignore them," said Morten Paulsen, a Tokyo-based analyst at CLSA Japan Securities Co., who's covered the robotics industry for decades.


Toyota has been experimenting with robots since at least 2004, when it unveiled a trumpet-playing humanoid with artificial lips, lungs and movable fingers that could accompany an actual human orchestra.


Since then research has become more practical. Toyota's latest android, the T-HR3, is a kind of avatar that can be manipulated remotely via wearable controls, with vision goggles that allow users to see through the machine's camera-eyes. The device could one day serve as arms and legs for the bedridden, or as a surrogate for relief workers in disaster zones.


In 2015 the automaker spent a billion dollars to open its AI-focused Toyota Research Institute in Silicon Valley. Last year it set up a $100 million fund to invest in startups and new robotics technology. This year the company restructured its Partner Robot division to speed decision-making and shorten development time.


"There's internal pressure all of a sudden to move faster,'' senior manager Keisuke Suga said at a recent industry forum near the automaker's Toyota City headquarters.


The road to robots has had its setbacks. In 2011, Toyota demonstrated a machine for lifting patients in and out of bed, but engineers had only tested it on healthy volunteers. Once they discovered that the frail and elderly required a more delicate touch, the product was shelved.


Another device, a personal scooter that resembled a Segway, looked promising in trials but was kept off the streets by regulatory holdups.


Outside of factories and warehouses, in fact, unfulfilled promise has been the main story for robots. Boston Dynamics, a ballyhooed firm started by engineers from the Massachusetts Institute of Technology, for example, has spent more than 12 years developing four-legged automatons but still hasn't proved they can be commercialized. Most of the $2.1 billion spent by consumers last year on household robots was for automated vacuum cleaners and lawnmowers -- not exactly the stuff of science fiction.


Toyota says the need for elder-care will change that. The automaker illustrates the point with a chart showing Japan's inverted age-pyramid in the year 2050, when a third-fewer workers will have to support twice as many old people as today. (Some 22 percent of the world's population will be over 60 by then, according to the World Health Organization.)


Toyota's Human Support Robot, or HSR, is the machine the automaker sees as closest to making the leap from lab to living room. The robot-equivalent of a Corolla - all function and no frills - the HSR is basically a retractable arm on wheels with a video screen on top and two large camera eyes that give it the rudiments of a face.


It weighs as much as a half-dozen bowling balls, but can only lift a 1.2-kilogram payload, about the weight of a medium-sized water bottle.


Still, loaded with the right software, the machine can do some interesting things.


In a demo this fall by one of Toyota's partners, an AI startup called Preferred Networks Inc., the robot was able to learn where books, pens and other items belonged on a shelf, and clean a room that looked like it had been turned upside-down by a three-year-old. Using its sensor-eyes and its pincer, the machine arranged a pair of slippers neatly on the floor next to each other, with both feet pointing in the same direction.


Asked when its home helpers will be available to consumers, Toyota wouldn't say. But adviser Masanori Sugiyama, a former top manager in the robot program, says the HSR could be ready for hospitals and rest homes in two or three years to do simple tasks like tidying up or delivering meals. For machines with more profound skills, the wait will be longer.


"They need to be able to understand what people are thinking and have empathy," Sugiyama said. "The idea is for the robot to be a friend."