Red America and blue America depend on each other; that's how it should be 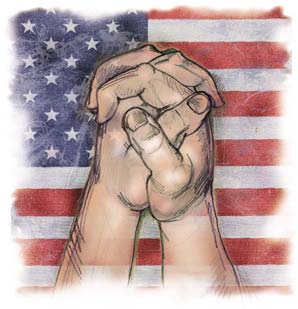 The red-blue, rural-urban dichotomy has solidified into a basic fact of American politics. The Democrats are now the party of diverse, urban areas, which also constitute the nation's hubs of cutting-edge financial, technological, medical and entertainment activity. The Republicans, meanwhile, dominate "flyover country," the ranches, farms and hamlets between the California coast and the Northeast corridor.

This increasingly sharp partisan divide corresponds to a divide between the most and least economically weighty locations in the United States, as measured by share of gross domestic product. In 2016, Hillary Clinton carried nearly 500 counties that generated 64 percent of GDP in 2015. Donald Trump won about 2,600 counties that produced just 36 percent of output.

Republicans used to gripe about the alleged unfair dependence of "takers" on "makers," but the 64-36 urban-rural GDP split, first reported by the Brookings Institution's Mark Muro and Sifan Liu, let the 2016 Democratic standard-bearer flip that script.

"I won the places that represent two-thirds of America's gross domestic product," Clinton told an audience in Mumbai earlier this year. "So I won the places that are optimistic, diverse, dynamic, moving forward. And [Trump's] whole campaign, 'Make America Great Again,' was looking backwards."

Unstated, but clear, was the implication that Trump had not only won the presidency with fewer votes from actual citizens, as opposed to presidential electors, but also that the electoral college magnified the voting power of people who, on the whole, contribute less to the country than Clinton's voters do.

Before other Democrats commit themselves to this line of analysis, they might want to consider an important fact about urban areas: They consume far more food and energy than they produce. And guess where food and energy come from.

"The US relies extensively on its non-urban regions to provide massive amounts of food and energy to sustain its growing urban centers, and to a degree that sets food and energy apart from other sectors of the economy," Michael Cembalest, chairman of market and investment strategy at J.P. Morgan, writes in his latest annual survey of the energy economy. "They provide the life blood to cities for their survival."

Each resident of the United States has an "ecological footprint" of about 20 acres, according to the Oakland, California-based nonprofit Global Footprint Network, meaning that it takes the natural resources produced on that much space to support each person.

Yet that land is almost entirely within the United States' borders, since approximately 80 percent of food, refined-oil products and electricity are domestically produced, not imported. If this were not the case, "the U.S. would be highly reliant on geopolitically insecure and costlier imports," Cembalest notes.

Trump counties may produce only 36 percent of GDP, but in a sense it's the right 36 percent - the 36 percent without which those dynamic, productive cities could not exist.

Of the top 15 food- and energy- producing states, Clinton carried only five in 2016: California, Illinois, New Mexico, Minnesota and Colorado.

Cembalest calculates that if electoral college votes were allocated according to food and energy production as well as population, Texas would have 81 electoral votes instead of its current 38, North Dakota would go up from three to 14 - and New York would shrink from 29 to 19.

No one would or should say that flyover country is actually underrepresented in the electoral college, but Cembalest's little thought experiment does remind us that the Constitution, by design, protects interests that might not fare so well under a more majoritarian system.

Notoriously, Iowa punches well above its weight in national politics, due to its first-in-the-nation presidential caucuses and two seats in the Senate, another institution that disproportionately favors rural America. We have a wasteful ethanol subsidy for Iowa's corn farmers as a result.

On the other hand, we probably wouldn't want a political system that actually empowered a handful of urban enclaves to exploit the hinterland.

Trump rode flyover country's grievances against big-city elites to the presidency. Clinton's remarks, and similar ones from other progressive types, imply that Democrats are entitled to respond in kind, apparently because they are the real "makers."

The truth is that the United States' regions are interdependent, and that interdependence is a good thing. "It's very appropriate to note that red, heartland places generate important agricultural, energy and manufacturing outputs just as blue, urban ones produce high-value technology, services, human capital and ideas," Mark Muro of Brookings told me.

One of the Constitution's many purposes, in fact, was to facilitate economic interdependence among a diverse population spread across a giant continent. For more than two centuries, the benefits of those constitutional arrangements have generally outweighed the costs.

That's cause for appreciation, not resentment.