Chuck, Nancy, Donald and 'The Wall' 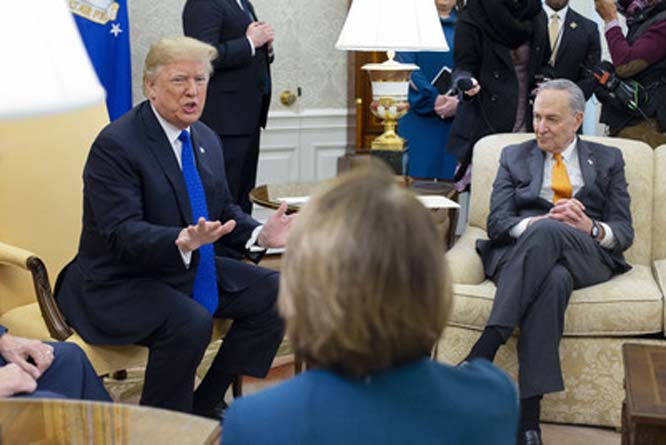 There was a moment in that Trump, Chuck and Nancy meeting about "The Wall" at the when I thought Nancy would surely win the day.

She'd put on her best "On " voice, place her arm around Chuck, slumping in his chair, and tell him, ever-so-brightly, "You are my knight in shining armor."

But it didn't turn out that way, did it? won the meeting.

And afterward, the two , once and future House Speaker and Senate Minority Leader , tried to spin their way out of it.

But they lost, and Trump won, publicly willing to accept blame for shutting down the federal government if he doesn't get a paltry $5 billion for that wall he wants.

And now Chuck and Nancy have once again allowed to become the party of no-border security. Trump, who ran and won the on the promise of building his wall along the Mexican border, fashions himself as America's Hadrian.

The Nancy, Chuck and Trump show will continue, although the 36-month sentence handed down to Trump's fixer lawyer may at some point in the future derail this fine drama through impeachment.

Yet it was clear by the pained smirk on Chuck's face, and by Pelosi's bizarre vulgarity, babbling on as she did about skunk urine and manhood, that Trump won their meeting.

The way I see it, want unfettered illegal immigration, so the undocumented can be put on costly welfare and other social programs and thereby become a new crop of Democratic voters. It is a time-tested formula that has worked before. And the Republican establishment, which has long turned a blind eye to illegal immigration because their donors still want cheap labor, still hate Trump.

A lot of them want a wall, they want an immediate stop to illegal immigration, and they don't like being played.

Which is probably why, in their meeting, Nancy complained about the media being into the room.

"So, I don't think we should have a debate in front of the press on this," she said, repeating her media discomfort many times.

Clearly, Pelosi believes that certain topics, i.e., American border security, should never be discussed in front of the children.

And who are the children? The American people, seated at the kids table, so they won't be troubled by troublesome grown-up talk. But Nancy? Not all American taxpayers yearn to be infantilized.

After it was over, Chuck mumbled as if he'd just had unmentionable outpatient surgery. And Nancy bragged about how she was "the mom" in the room, before she veered off to a treatise on skunk urination fights while questioning the president's "manhood."

We can at least thank Pelosi for having the decency not to hold up her hands.

But when a gentlewoman like feels compelled to discuss skunk urine in the most vulgar terms, while putting her "I was trying to be the mom" in the same rhetorical stew as her ruminations on "manhood," it suggests she's lost the day.

I'm clearly in the minority. Many pundits puffed up their chests and waxed proudly that Pelosi was "the mom."

But let me ask you: Does your mom talk about skunk urine in public?

I will not repeat her quotes here. Cheering on a great lady like Pelosi as she debases herself by crawling through the mud of VulgarTowne is something I just won't do. Feel free to Google her comments while you're eating lunch.


But Trump won, even without much help from that silent white-haired throw pillow in the room. I believe the pillow may have been the vice president of .

Now, how much did Hadrian spend on his wall blocking the blue-painted Scots from drifting southward into what became ?

Hadrian had his legions, and slaves, so it probably didn't cost the $5 billion Trump is demanding for his wall.

The upshot of the Nancy, Chuck and Trump show the other day at the is that the president is willing to take credit for shutting down the government if he doesn't get that money.

While many who "believe" in government as others "believe" in Christ might freak at the prospect of a government shutdown, it means only that unnecessary government workers will go on furlough, and get their checks later.

Watching them yak at each other in the , Trump using his reasonable voice and Pelosi at least trying to fight him while Schumer played the wrinkled root vegetable in the back of your crisper, I wondered about .

Republican Sen. of , the non-interventionist, was the candidate I hoped would win the .

I wondered if Paul might have trapped them as did Trump, without a trace of irony on his face. I just don't think Paul could have pulled it off.

But Paul would have done what Trump forgot to do, with those cameras rolling and Nancy thinking of skunk urine and not wanting the kids to hear:

Paul would have reminded in the room about all the anti-illegal immigrant border talk from just a very short time ago.

All that tough anti-illegal immigration speechifying from Schumer and , and Bill and ?

But they don't want the kids to hear about it.