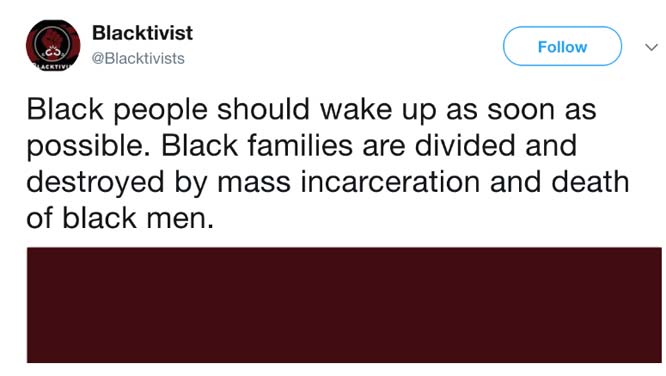 A new report prepared for the Senate Intelligence Committee reveals that the Russians, in their bid to boost President Donald Trump, have been more fixated than previously understood on trying to dampen African-American political engagement.

Researchers at Oxford University's Computational Propaganda Project and Graphika, a network analysis firm, spent seven months analyzing millions of social media posts that major technology firms turned over to congressional investigators. Their goal was to understand the inner workings of the Internet Research Agency, which the U.S. government has charged with criminal offenses for interfering in the 2016 election.

It turns out that African Americans were targeted with more Facebook ads than any other group, including conservatives.

Three of the four most-liked Facebook posts put up by the Russian influence effort came from an account called Blacktivist that urged the community to be more cynical about politics. African Americans were urged to vote for Green Party candidate Jill Stein throughout the month before the 2016 election.

On Instagram, all five of the most-liked posts created by the Russians were aimed at African American women. They included the hashtags #blackpower, #blackpride, #unapologeticallyblack, #blacklivesmatter, #icantbreathe, #riot and #blackgirlskillingit.

The influence operation - run out of St. Petersburg, Russia - was sophisticated, relentless and became more effective with time. Its goal was to manipulate identity politics to tear America apart. The Soviet Union had also tried to heighten racial divisions during the Cold War, but their operatives lacked access to the technology platforms that now make it so easy.

"Messaging to African Americans sought to divert their political energy away from established political institutions by preying on anger with structural inequalities . . . including police violence, poverty, and disproportionate levels of incarceration," the report says. "These campaigns pushed a message that the best way to advance the cause of the African American community was to boycott the election and focus on other issues instead."

The Washington Post exclusively obtained a draft of the study Sunday. The intelligence committee, led by Sens. Richard Burr, R-N.C., and Mark Warner, D-Va., plans to publicly release it later this week, along with a separate report conducted by another team of researchers. It's not clear whether they'll formally endorse the findings.

The Russian machinations to manipulate conservatives have been well covered over the past two years; but the scale of the operations focused on African Americans has never been laid out so vividly. And it's especially notable because Clinton very narrowly lost three key states - Pennsylvania, Michigan and Wisconsin - because of lower-than-expected black turnout in the urban areas of Philadelphia, Detroit and Milwaukee.

In addition to targeting major metropolitan areas that had become hot spots in the Black Lives Matter movement, the agency also microtargeted Ferguson, Missouri - attempting to reignite the flames of racial animus after the violence in the streets had died down. They used Facebook's Ads Manager tool to target African Americans who were specifically interested in "Black Nationalism and identity," as well as "incarceration" and the criminal justice system.

"The IRA used a variety of false personas (sock puppets) to infiltrate American political discussion communities on the right and left, including black activist communities, in order to exacerbate social divisions and influence the agenda," the document explains. "Accounts posing as Americans on the right and left were frequently created and operated from the same computers."

The report, which runs roughly 90 pages, is definitive that a central goal of all this was to elect Trump and, subsequently, to buoy him once he took office: "What is clear is that all of the messaging clearly sought to benefit the Republican Party - and specifically Donald Trump," it concludes. "Trump is mentioned most in campaigns targeting conservatives and right-wing voters, where the messaging encouraged these groups to support his campaign. The main groups that could challenge Trump were then provided messaging that sought to confuse, distract and ultimately discourage members from voting."

• The Russian campaign generated levels of engagement that would make the marketing departments at even the country's biggest corporations envious. Between 2015 and 2017, over 30 million users shared the agency's Facebook and Instagram posts with their friends and family - liking, reacting to and commenting on them along the way. Their organic Facebook posts were shared 31 million times, liked 39 million times and generated 3.5 million comments. Their Instagram posts garnered almost 185 million likes and 4 million user comments. For the study, Twitter turned over 8.5 million tweets from 3,841 accounts believed to have been managed by the agency.

• The Russians used all the best practices of digital marketing. They primarily posted general feel-good posts to build large and loyal followings on their accounts so that the anti-Clinton political posts would pack more of a punch. They used tools designed to help American businesses reach customers to slice and dice the electorate for sinister propaganda purposes. The report says that the Russians used memes, comedy, funny pictures and music streaming to attract younger users.

"Facebook uses an auction system to price impressions for different segments, meaning different target interests are priced differently, according to advertiser demand," the report explains. "Ads to African Americans, Native Americans, Latin Americans, and youth were the cheapest, while ads to conservatives, Muslim Americans, and LGBT users were the most expensive. If we look at the amount spent in total, we see that a similar amount was spent on conservatives (a small number of expensive ads) as was spent on targeting African Americans (a large number of cheap ads)."

• There was a lot of trial and error, and the Russian agents used their experience targeting dissidents domestically to sow discord overseas. The group began targeting U.S. voters for misinformation as early as 2013, according to the report, using some of the techniques that it already deployed on its own citizens and in Eastern Europe. Several of the accounts had even been repurposed. Researchers found that one targeted an Indonesian audience in Indonesian before abruptly shifting to English-language posts about U.S. politics.

The Russians started on Twitter and then moved toward YouTube, progressed to Instagram and finally figured out Facebook. As they ramped up, they conducted dry runs to gauge their ability to influence Americans. For example, accounts aimed at both conservatives and liberals peddled an entirely fabricated story around Thanksgiving in 2015 that turkeys from Koch Farms and Walmart would cause food poisoning.

• One case study in an appendix of the report illustrates how the Russian effort evolved across platforms in a way that made it harder for technology companies to stop. "Black Matter US" was created to translate online activity into in-person activism for "the Black rights movement." This fictionalized persona maintained accounts on Facebook, Twitter, Instagram, YouTube, Google+ and Tumblr. The Internet Research Agency purchased Google ads to promote an associated website called blackmattersus.com and set up a PayPal account to encourage and accept donations to the false organization.

Its Twitter account, @blackmatterus, started in October 2015 and grew to have more than 20,000 followers. There were Twitter profiles set up for fictional African American "contributors" to the website; the made-up @Crystal1Johnson became the sixth-most-retweeted IRA asset. Most of the posts were written to amplify racial tensions.

The group's Twitter account often linked to a Facebook page called "Black Matters" that acquired more than 222,000 followers. It encouraged African Americans to participate in real-life rallies against police treatment of minorities. The page promoted events in at least six cities, according to the report, from New York to Detroit, Charleston, South Carolina, Baltimore and Jackson, Mississippi. The report highlights 14 links from the @blackmatterus Twitter account to various Facebook events, including one called "Firearms Training Class for #BlackWomen."

That Facebook account was shut down in August 2016. The next day, a new Facebook account called "BM" was created. The original Twitter account, which was not closed at that point, accused Facebook of "supporting white supremacy" by shutting it down and pointed traffic to the new Facebook page. The Russians then began buying Google ads targeting African Americans with links to the "Black Matter US" website. One of the display ads said: "Cops kill black kids. Are you sure that your son won't be the next?" This second Facebook page grew to 103,013 followers, according to the report. Its messages shifted to become less militant and more focused on positive black empowerment.

In August 2017, the original Facebook page somehow reemerged. "We're back," the Russians wrote. It's since been deleted again.

• Emboldened by Trump's victory, the scale of the disinformation campaign picked up substantially after the 2016 election - especially on Instagram - until companies cracked down last summer. The report finds that the peak of ad volume on Facebook from the agency came in April 2017 around the Syrian missile strike. One notable development is that the Russians began to aggressively target Hispanics with what they dubbed a "Brown Power" campaign. Using many of the same themes they'd used with African Americans, they highlighted stories about deportations, discrimination and the treatment of migrants. It's hard to believe, though not impossible, that the Russians could do all this without any advice from any Americans to understand how our process works. But the report doesn't address that, and there's much that remains unknown.

• Google, and its subsidiary YouTube, were especially unhelpful to congressional investigators trying to study what the Russians were up to. "Unfortunately, Google made the unusual choice to provide data to the Committee in nonmachine-readable format," the researchers complain. "The ads data was provided in lengthy PDF format whose pages displayed copies of information previously organized in spreadsheets (Google could have provided the original spreadsheets in CSV or JSON files). A separate folder contained 228 video files, without metadata, giving no details on the user that uploaded the video, which channels it may have been associated with, and the engagement that it received. Our investigation into the data provided by Twitter and Facebook suggests the IRA maintained other properties on Google products, notably Google+ profiles."

• The disinformation campaign is active and ongoing elsewhere: "The dataset only includes data provided by Twitter, Facebook, and Google. Although it is reasonable to assume that the core of the IRA's effort was conducted on these platforms, other social media platforms also acknowledged that their internal investigations yielded IRA-related activity (notably Reddit, Tumblr, Pinterest, and Medium). Posts and profiles contained in this dataset clearly show other platforms were also targeted in this effort. Investigating the suspended pages and posts in the dataset also led to a high probability of IRA-affiliated live pages still being online and posting."

The authors sound a cautionary note about what's become of the platforms that helped ignite the Arab Spring. "Social media have gone from being the natural infrastructure for sharing collective grievances and coordinating civic engagement," they write, "to being a computational tool for social control, manipulated by canny political consultants and available to politicians in democracies and dictatorships alike."