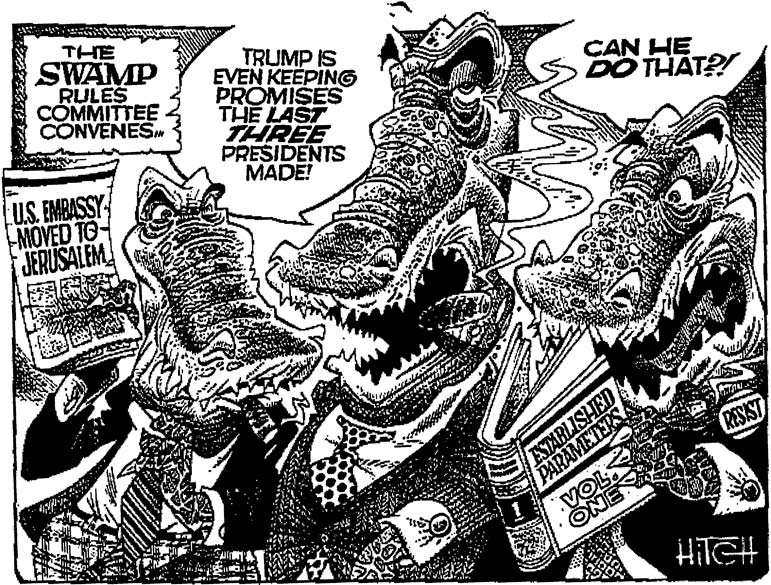 San Clemente, California, in 1978 was the Elba of America. I went there fresh out of college for a job working as a researcher for David Eisenhower, which quickly became a job as an editorial assistant to former president Richard M. Nixon, who had finished his memoirs and moved on to the two books I worked on, "The Real War" and "Leaders."

Early in 1980, Nixon moved to New York City, and I went with him, leaving in the fall for law school. I went back to California in 1989 at his request to oversee construction of his library in Yorba Linda, a second two-year stint with one of history's remarkable figures.

Which is a long way of saying that my observations on President Donald Trump's current situation are grounded in hundreds of hours of conversation with a former president, one with great successes and the worst fall in American political history.

Nixon's oft-repeated view in his unique retirement: Look forward. Always. There isn't any upside in replaying the past or its decisions, glories and failures. He would occasionally write and talk about the past - for his memoir, with David Frost - and events long over informed his take on events happening in real time. But he had no bitter recriminations, no dwelling on what might have been, how he might have acted differently. Just look forward. In the 15 years I knew him, he was remarkably at peace and always focused on the future of the country and the world.

If Trump embraces that outlook, his prospects for reelection are excellent. Trump's record of accomplishments is long and real and all the screaming on cable can't erase two Supreme Court justices, 30 federal appeals judges, a massive military rebuild begun, the crushing of the Islamic State, the huge tax cut and tax reform, bipartisan legislation on opioids and prison reform, repeal of the Obamacare mandate, withdrawal from the Iran "deal" and Paris climate accords, and a regulatory rollback across many agencies (most consequentially for the economy at the Environmental Protection Agency and Interior Department).

Moving the U.S. Embassy in Israel to Jerusalem and the forging of the new entente among Egypt, Jordan, Saudi Arabia, Kuwait, Bahrain and the United Arab Emirates - and Israel - has brought clarity to the standoff between Iran - the world's greatest exporter of terrorism and instability - and its enemies in the region.

And, of course, the economy is cooking even as the stock market makes one of its periodic and inevitable "corrections."

Given all that, Nixon's attitude in retirement - that only today and tomorrow matter - would serve Trump well. Find a new secretary of defense quickly. Sen. Tom Cotton, R-Ark., former senator Jim Talent, R-Mo., or former ambassador to Germany Robert Kimmitt would all be excellent choices who can do the crucial job well. The same for the Interior Department. Insist that attorney general nominee William Barr commit to not recusing himself from the supervisory role over the special counsel.

Democrats will push for a recusal that he simply cannot give if the Justice Department is going to regain the confidence of that part of the country shocked by the actions of a handful of senior leaders in the FBI in 2016.

Next: Prepare a State of the Union that hammers on the costs of prescription drugs and the need and means of infrastructure repair done in partnership with state and local governments. Demand the Pentagon finally produce a plan to get from today's fleet of 280 to a355-ship Navy. Keep the judicial nominations flowing. Count on Sen. Lindsey Graham, R-S.C., to blow through the obstructionism in the Judiciary Committee, and count on Sen. Mitch McConnell, R-Ky., to deliver these lifetime appointments on the rapid - indeed, even faster - pace of 2017-2018.

Convene the true allies on the Hill who are also combat veterans - folks such as Cotton, Sens. Joni Ernst, R- Iowa, and Dan Sullivan, R-Alaska, Rep. Mike Gallagher, R-Wis., and incoming Rep. Dan Crenshaw, R-Texas - and talk through Afghanistan and Syria, Iraq and Yemen, and especially what China is about.

The abundant successes of the first two years cannot be erased by pundits and their over-the-top rhetoric. So just look forward, trust your best people, especially Mike Pompeo and John Bolton, the new AG and the new secretary of defense. Mainstream media reports of your mood are no doubt partially fiction and partially true. Whatever the mix, just toss them aside.