What happens when police fail 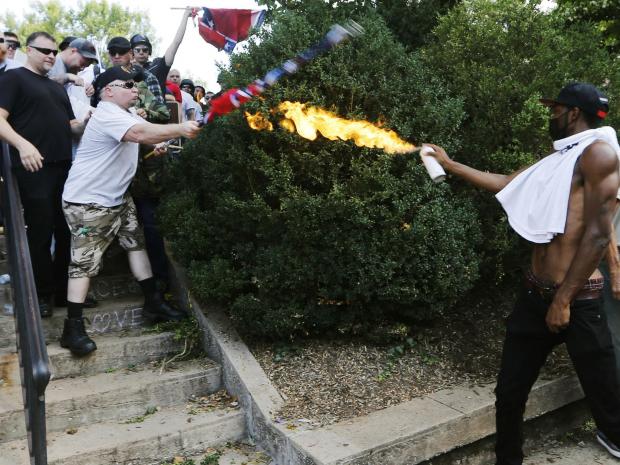 Last summer in Charlottesville, in a clash between neo-Nazis and confederate monument supporters on one side, and "antifa," or anti-facist, and Black Lives Matter supporters on the other, numerous people were hurt, and one person, Heather Heyer, was killed when a white nationalist supporter drove his car into a crowd. Now an independent report has come out, suggesting that much of the blame for the clashes, injuries and death lies with poor police work by the Charlottesville Police Department, the Virginia State Police and the University of Virginia Police.

The report, authored by former U.S. attorney Timothy Heaphy for the Charlottesville City Council, found, as reported by USA Today:

• Officers weren't stationed along routes to the park, but instead remained behind barricades in relatively empty zones.

• Officers were inadequately equipped to respond to the clashes between the two groups, and tactical gear was not accessible to officers.

Furthermore, though no specific evidence of a "stand down" order was found, as some have charged, the report did find that police didn't do their jobs: "We did not find evidence of a direct order to officers to 'stand down' and not respond to fights and other disorders. Even if there was no explicit â€˜stand down' order in place, CPD and VSP both failed to â€˜stand up' to protect human life." Areas where conflict could be expected to occur didn't have police officers assigned to them; areas where police officers were stationed were out of the way.

When violence first broke out, according to two witnesses Chief Thomas reportedly said "let them fight, it will make it easier to declare an unlawful assembly."

When the police finally decided to shut the rally down, they did it in a way that forced the protesters and counterprotesters into each other, instead of separating them, making violence far more likely. Meanwhile police who could have deescalated the violence stood aside. "This represents a failure of one of government's core functions -- the protection of fundamental rights," Heaphy wrote. "Law enforcement also failed to maintain order and protect citizens from harm, injury and death."

Well, that's supposed to be law enforcement's job. But, as Robert Shibley wrote in these pages shortly after the event, law enforcement has been doing a terrible job of managing protests all over the country: From protests that shut down speakers at Berkeley, to mob attacks on Trump supporters in Chicago where the police stood by, law enforcement has all too often failed to protect people trying to speak freely from being silenced by force, and often injured.

It wasn't that bad everywhere. At a similar event in my own hometown of Knoxville, the Knoxville Police Department mounted a huge presence, kept the protesters and counterprotesters separated, and banned sticks, bats and other weapons in the protest area. It went off peacefully.

But things were particularly bad in Charlottesville, where both sides, as Shibley noted, reported that the police weren't doing their jobs: "The organizer of the â€˜Unite the Right' rally complained that â€˜police purposefully created the catastrophe that led to a melee in the streets of Charlottesville,' while a Black Lives Matter leader attending the counter-protest remarked, â€˜It's almost as if they wanted us to fight each other.'"

It was so bad that the Huffington Post reported: "The police did little to stop the bloodshed. Several times, a group of assault-rifle-toting militia members from New York State, wearing body armor and desert camo, played a more active role in breaking up fights." When militia groups are doing the job of the police, that's a bad sign.

It's good that the City Council secured this outside inquiry (one that was met with little cooperation, and no small amount of obstruction, from Charlottesville Police Chief Al Thomas, who deleted text messages and used personal email in an effort to avoid a Freedom of Information Act request.) But it's not just Charlottesville that needs to heed the lessons of this sad experience.

It's the job of police to keep order, and to allow people to exercise their constitutional rights -- including free speech -- without violence from those who disagree. We should have protests and counter protests, not riots. Since American politics shows no sign of calming down anytime soon, police everywhere need to pay attention to the lessons learned here. Otherwise more people will be hurt, and die.