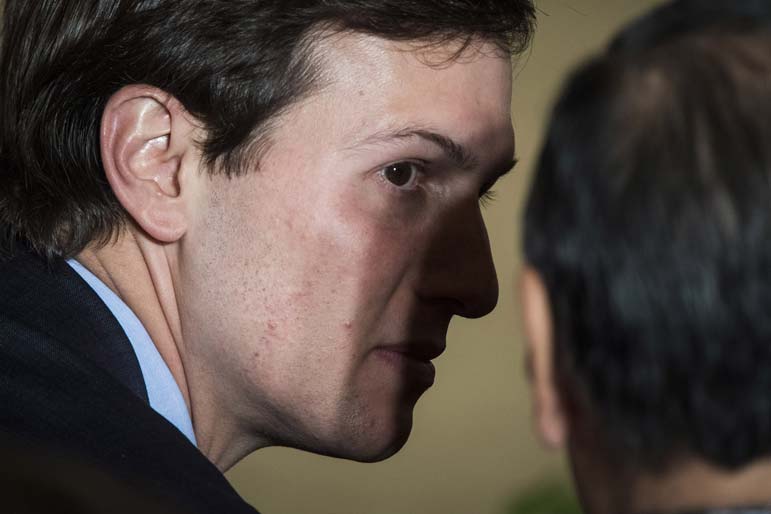 Former national security adviser Michael Flynn's guilty plea Friday for lying to the FBI is alarming news for Donald Trump. But the first person it's likely to jeopardize will be the president's son-in-law, Jared Kushner.

Two former officials with the Trump transition team who worked closely with Flynn say that during the last days of the Obama administration, the retired general was instructed to contact foreign ambassadors and foreign ministers of countries on the U.N. Security Council, ahead of a vote condemning Israeli settlements. Flynn was told to try to get them to delay that vote until after Barack Obama had left office, or oppose the resolution altogether.

That is relevant now because one of Flynn's lies to the FBI was when he said that he never asked Russia's ambassador to Washington, Sergey Kislyak, to delay the vote for the U.N. Security Council resolution. The indictment released Friday from the office of special prosecutor Robert Mueller describes this lie: "On or about December 22, 2016, Flynn did not ask the Russian Ambassador to delay the vote on or defeat a pending United Nations Security Council resolution."

At the time, the U.N. Security Council resolution on Israeli settlements was a big deal. Even though the Obama administration had less than a month left in office, the president instructed his ambassador to the United Nations to abstain from a resolution, breaking a precedent that went back to 1980 when it came to one-sided anti-Israel resolutions at the U.N.

This was the context of Kushner's instruction to Flynn last December. One transition official at the time said Kushner called Flynn to tell him he needed to get every foreign minister or ambassador from a country on the U.N. Security Council to delay or vote against the resolution. Much of this appeared to be coordinated also with Israeli prime minister Benjamin Netanyahu, whose envoys shared their own intelligence about the Obama administration's lobbying efforts to get member stats to support the resolution with the Trump transition team.

A spokesman for Kushner referred me to his lawyer, Abbe Lowell, for this column. Lowell did not return an email before deadline.

For now it's unclear what to make of all of this. Lying to the FBI is a felony and always a serious matter. We also know from Flynn's "statement of the offense" that he lied to FBI agents as the bureau was investigating Russia's meddling in the 2016 election and any links between Russia and the Trump campaign in this period. Nonetheless, nothing in the Flynn plea sheds any light on whether the Trump campaign actually colluded with Russia to influence the election.

ABC News reported Friday that Flynn is prepared to tell Mueller's team that Trump had instructed him to make contact with Russia during the campaign itself. If those contacts involved the emails the U.S. intelligence community charges Russia stole from leading Democrats, then Mueller will have uncovered evidence of actual collusion between the president and a foreign adversary during the election. Impeachment could then be in the cards.

But it's also possible that the Justice Department became interested in Flynn's initial conversation with Kislyak on other, less explosive grounds. One leading theory pushed Friday by Democrats involves a violation of a 1799 statute known as the Logan Act. A relic of the John Adams administration, this discredited law makes it illegal for a private U.S. citizen to undermine the foreign policy of a sitting president in contact with a foreign power. No American has ever been successfully prosecuted under that law. Some conservatives urged the George W. Bush administration to prosecute former House Speaker Nancy Pelosi, D-Calif., under the Logan Act in 2007 when she visited Syrian dictator Bashar al-Assad when the White House was trying to isolate him. Nothing came of that.

A Logan Act investigation would explain the bureau's interest in Flynn's conversations about the U.N. Security Council resolution on Israel. This is what California Sen. Dianne Feinstein, the ranking Democrat on the Senate Judiciary Committee, said on Friday: "This shows a Trump associate negotiating with the Russians against U.S. policy and interests before Donald Trump took office and after it was announced that Russia had interfered in our election. That's a stunning revelation and could be a violation of the Logan Act, which forbids unauthorized U.S. citizens from negotiating with a foreign power."

If that's all there is, then the whispers of collusion will look foolish. Nonetheless, it may be enough to take out not only Flynn but also the man who married the president's daughter.