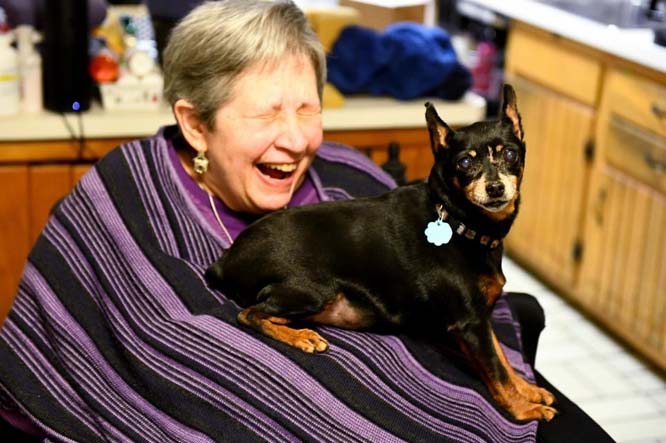 Harriet Fridkin, laughs after her dog, Gracie, crawled on her. Katherine Frey for The Washington Post.

It's been about 35 years since Harriet Fridkin has had full use of her body. Multiple sclerosis slowly has seized her, leaving her unable to move any part of herself except her head. Her mind is as sharp as it ever was.

So, five nights a week for more than two decades, Fridkin, 75, has been a gracious host in her Montgomery County, Maryland home. Friends come to visit, always on schedule, sometimes to give her a therapeutic massage, sometimes to feed her, sometimes to unload about their day and get her time-tested advice for an hour or two.

"I like to talk to people," said Fridkin, her voice softer than it used to be. "If people have problems I like to help solve them."

Her friends, who have called themselves "Harriet's Harem" since 1996, have created a support group remarkable in its loyalty and longevity. A calendar goes out once a month, each day is assigned to a friend, and there's never a day that's left open.

If her nose itches, they'll scratch it, if she's thirsty they'll give her a drink of water. Mostly, they enjoy her company and marvel at her happy outlook on life and unflinching humor.

"I only keep the good friends," Fridkin says with a big smile. "The other ones, I don't keep around."

The harem started with 12 members, and people have come and gone through the years. Some have died, some have moved away, some have left and rejoined as their schedules allowed. Now there are nine loyalists who cover the month, three of whom turned 75 years old this year.

"She gives so much more to all of us than I can tell you," said Judy Feldman, 83, one of the original organizers of Harriet's Harem. "She gives us the inspiration to go on, to overcome anything."

Fridkin, who has three children and six grandchildren, lives in Potomac with her husband of 54 years, Jerry Fridkin. She has a caregiver who helps take care of her during the day. But it is difficult for her to leave the house, which is where Harriet's Harem comes in.

"It helps her keep up with the outside world," said her daughter Marjorie Fridkin, 43.

One of Harriet Fridkin's favorite nights of the week is Monday, when her bridge group comes over to her Potomac home to play cards twice a month, just as they have since before she became immobile. A helper puts down her cards for her. She also is an avid Sudoku player, memorizing the entire grid before painstakingly instructing someone - often a member of her harem - where to write in each number. And she's a book lover and devoted QVC shopper.

"She is living, she's not just existing," Feldman said. "It's astounding."

The idea for an organized caregiving circle started in 1996 when Fridkin's mobility was getting worse. She could no longer walk, and Feldman and another friend were pitching in, taking her to appointments, preparing food and staying with her so she wouldn't be alone before her husband got home from his job in the Department of Justice's tax division. But the commitment became somewhat of a time challenge.

"We couldn't keep up with it," Feldman said. "Jerry is such a proud man and did not want to accept any help, so we put it on us and said we needed help."

They came across a piece in Parade Magazine about a woman named Cappy Capossela who had written a book titled "Share the Care: How to Organize a group To Care For Someone Who is Seriously Ill." It was about a group of women who had taken care of a friend who was dying of cancer and in desperate need of help as a single mother of two girls. The care circle was highly coordinated, efficient and loving. The book detailed how the three-year experience was transformative for the women, giving them purpose and direction, and they believed it vastly improved their friend's end-of-life experience.

The women in the book called themselves the "Funny Family."

"I thought the alliteration was fun," Feldman said. "So I came up with 'Harriet's Harem' and it stuck."

Fridkin's daughter Marjorie, who is a general surgeon at Garrett Regional Medical Center in western Maryland, said she's explained to patients and families over the years about her mother's harem and how helpful it is. But she's never seen it even close to replicated.

"Without social interaction, people are like a plant that doesn't get watered," Fridkin's daughter said, looking at her mother. "The world comes to you. It has kept you who you are."

Before Fridkin got sick, she was a gourmet cook, which was a great irony because her husband has always preferred frozen dinners, a dynamic that caused some friction and endless amusement in their marriage. So she'd cook elaborate meals and feed her neighbors, either when they stopped by or by passing a pot over the fence.

"If they walked in, they'd walk out with something," Fridkin said of her friends and neighbors.

She laughed recalling homemade pasta "hanging all over the kitchen" and having an early version of the Cuisinart to use for special recipes.

As a younger woman, her house was always filled with her children, their friends, and the smells of the kitchen. "When it was lunch time I would feed them," Fridkin said. "They always knew they could stop here."

Fridkin had several jobs through the years, working as an elementary school teacher in the District of Columbia and Montgomery County, and she also worked with an Alzheimer's organization coordinating care and support groups. She even continued working after her body started giving out.

Her daughter recalls that when she was younger, her mother was in constant motion, cooking, knitting, beading or entertaining friends.

So when Fridkin got sick, her friends and neighbors were the first to jump up and offer help. While the problems were very serious, none of the women ever took themselves too seriously.

Feldman remembered one day when Fridkin was still going out to restaurants but could not feed herself. It was Feldman's job to feed her, but they gabbed so much that Fridkin barely go to eat. When it was time to go, Feldman pushed the wrong button on the wheelchair and sent her friend careening into the table, knocking it over. Mortified, she looked down at her friend.

"I was horrified and terrified," Feldman said. "And she was just howling laughing."

Years ago, Jerry Fridkin set up their home for maximum ease for his wife and her wheelchair. While she has always been the more social spouse, and Jerry Fridkin is a man of fewer words, he deeply appreciates what the harem has brought.

"I like to see Harriet having outside friends and interacting with friends. I like to see my wife happy," he said. "It's a tribute to her, it shows you what a special person she is."

Fridkin said she hopes the story of her harem will touch someone like the story of Cappy Capossela's "Funny Family" touched her and her friends years ago. She attributes her good humored disposition in great part to her friends.

"It's a lot easier to concentrate on somebody's else's problems and somebody else's life than just think about your own problems," she said. "I really hope it's helpful to let people know they can form a group like this."