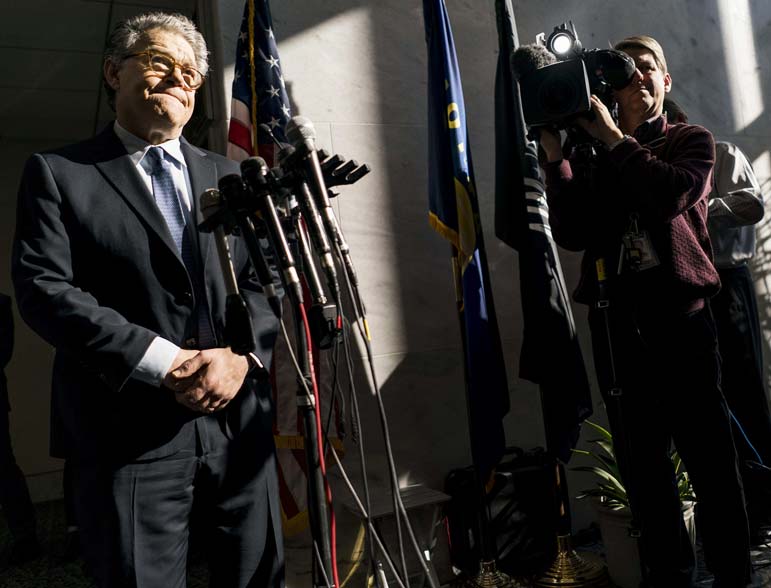 In the wake of a growing pile of sexual misconduct accusations, Sen. Al Franken, Comedian of Minnesota, was pressed by a majority of Senate Democrats to resign. When the number of accusers reached a critical mass, "They turned on one of their party's most popular figures with stunning swiftness," reported the Washington Post.

That's a pretty dramatic decline from the heights just nine months ago, when the Post was preparing him for the White House. Its headline then was "Al Franken May Be the Perfect Senator for the Trump Era — a Deadly Serious Funnyman." He was "having a breakout moment as a political star," and he "spent the last eight years proving that he's good enough, smart enough, and doggone it, people like him."

Post reporter Karen Tumulty, the writer of the piece, turned to Franken's close friend Norman Ornstein, who insisted, "He has that Perry Mason quality." Except no one ever saw Mason putting his hands over a sleeping woman's breasts.

After the Democrats purged Franken, liberal journalists like Andrea Mitchell complained about a "rush to judgment." In a discussion with her on MSNBC, Tom Brokaw said political and media institutions "have to agree to a kind of codification of what is objectionable and how people should be held responsible for it." He added: "This is not third-degree murder. This is not a stick-up of some kind in which you can clearly identify a crime. This is a subjective judgment about inappropriate behavior."

That's correct. Judgment about ethics over the years has been remarkably subjective. No one can say the Senate has no place for men who abuse women.

Sen. Ted Kennedy was honored by the media for four decades after leaving Mary Jo Kopechne to drown in his car at Chappaquiddick. In 1989, Mitchell marked the 20-year anniversary of the drowning with a gushing tribute to Teddy winning respect. "Some call him King of the Hill, with a hand in every big issue," she said.

All those Democrats and liberal journalists turned around dramatically in 1991 and chose a very different subjective judgment against then-Supreme Court justice nominee Clarence Thomas. Anita Hill, his former employee, had no photograph of Thomas grabbing her. She never even claimed that he did. He was accused of talking dirty, and for that alone, Democrats wanted him voted down.

With the rise of Bill Clinton in 1992, the subjective judgment changed once more. Sexual misbehavior was again acceptable — and victims were not. The media that compared Hill to civil-rights icon Rosa Parks then found Clinton accuser Paula Jones to be a "Dogpatch Madonna," who they claimed pinched men in the rear down at the Red Lobster.

Make no mistake: Franken's ouster is in part a Democratic Party maneuver to clean house in the event Judge Roy Moore is elected to the Alabama Senate. The former Franken-promoting Washington Post got the Moore ball rolling with a disturbing article that included Leigh Corfman's claim that Moore initiated sexual contact with her in 1979, when she was 14. She expressed her displeasure at the contact, and he drove her home.

This accusation is more serious than Anita Hill's and, as distasteful as it is, much less serious than Juanita Broaddrick's rape charge against President Clinton or Mary Jo Kopechne's death. But the Mitchells and Brokaws grade sex scandals by checking the party label first. If Corfman had accused Clinton with a similar tale, the media elites would have felt sick and dragged their feet, just as they did with Jones and Broaddrick.

Don't cry for Al Franken, who is rich and famous and has liberals feeling badly for him, despite all the accusers. Today's situational ethics didn't permit him to stay in the Senate and get the Kennedy treatment.