How Joe Biden twisted the case against Jeff Sessions 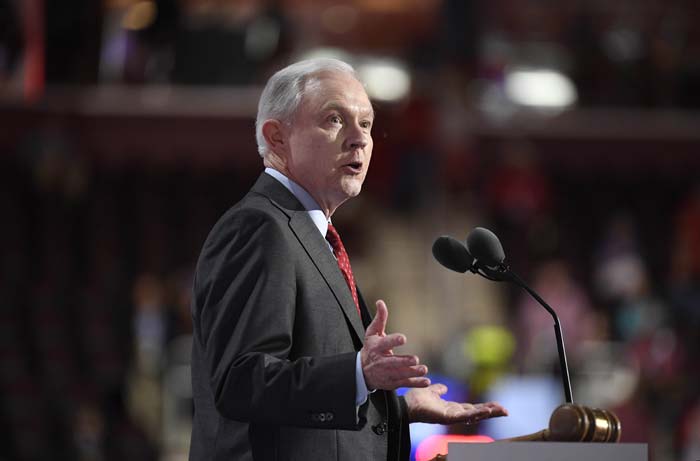 There's been talk among some conservatives and Republicans that Democrats are plotting to "Bork" the nomination of Sen. Jeff Sessions to be attorney general. That's not right. What Democrats really hope to do is to "Ashcroft" the man soon-to-be Minority Leader Charles Schumer likes to call "my good friend from Alabama." Sessions' supporters have expected it from the moment President-elect Trump made the Alabama senator his first Cabinet pick.

Sixteen years ago, John Ashcroft was a Republican senator nominated by a Republican president who lost the popular vote but won the Electoral College after a particularly contentious election.

The 2000 race also left the Senate split 50-50, with Republican Vice President Dick Cheney breaking ties. In a power-sharing arrangement, the Judiciary Committee was evenly split, 9-to-9, with a Republican chairman. If Democrats could stick together, they could hold Ashcroft to a 9-9 tie in committee, which would have allowed the nomination to go on to the full Senate, but would also have allowed Democrats to portray it as a vote of no confidence in a top George W. Bush appointee.

In Judiciary Committee hearings, Democrats attacked Ashcroft furiously. They extended the hearings to four days, called a long slate of outside witnesses, and attempted to portray Ashcroft as a kind of neo-Confederate, hyper-religious abortion fanatic who was, in the perennial favorite formulation of Democratic attacks on Republican nominees, "insensitive" on issues of race.

In the end, Ashcroft won the committee vote, 10 to 8, only because Democratic Sen. Russ Feingold, a friend of Ashcroft's, voted to move the nomination to the floor as an "olive branch" to the new administration. Democrats hated Feingold's apostasy, while Ashcroft, damaged but alive, eventually won confirmation.

Now, Republicans have a 52-48 advantage in the Senate and will likely have a one-vote advantage when the Judiciary Committee is formally organized in January. A party-line vote would win for Sessions. But that hasn't stopped Democrats from looking back to the Ashcroft precedent when, without a majority, they managed to beat up one of the new president's nominees.

In a letter Monday to Sen. Chuck Grassley, the Republican chairman of the Judiciary Committee, eight Democrats currently on the committee argued that Sessions' hearings should be at least as long and involved as Ashcroft's.

"John Ashcroft was a senator for only six years, serving on this committee until just before he was nominated to be attorney general," the Democrats wrote. "His confirmation hearings required four days, and included testimony from four members of Congress and 19 additional outside witnesses. Senator Sessions has served nearly 20 years in the Senate, more than three times longer than Attorney General Ashcroft ... His nomination will present a voluminous record spanning tens of thousands, if not hundreds of thousands of pages."

Sessions will receive a "tough vetting," promised Schumer, Sessions' good friend from New York who has taken part in many confirmation hearings on the Judiciary Committee but will leave the panel when he becomes minority leader in January.

Grassley is not ready to go along. "The confirmation process of John Ashcroft to be attorney general turned into a reckless campaign that snowballed into an avalanche of innuendo, rumor and spin," the chairman said in a statement after meeting Sessions on Tuesday. "That will not happen here."

The bottom line from Republicans: No Ashcrofting.

Sessions has, of course, seen it all, from both sides. He was famously rejected by the committee in 1986 when he was nominated to a seat on the U.S. District Court in Alabama. (Many Republicans believe that Sessions' confirmation fight was a Democratic trial run for attacking the Supreme Court nomination of Robert Bork the next year, meaning Sessions was borked before Bork.)

Sessions went on to win a Senate seat in 1996, took a place on the Judiciary Committee, and was a vocal advocate for Ashcroft in the committee in 2001. He knows what is coming. But he also knows votes, and this time Republicans on the committee will have more votes than Democrats. The GOP can exercise more control over the hearing and witnesses than they could in the 9-to-9 days of the Ashcroft nomination. If Sessions can keep the support of all the Republicans on the committee -- and there is no indication so far that any will defect -- he won't face a repeat of the Ashcroft experience.