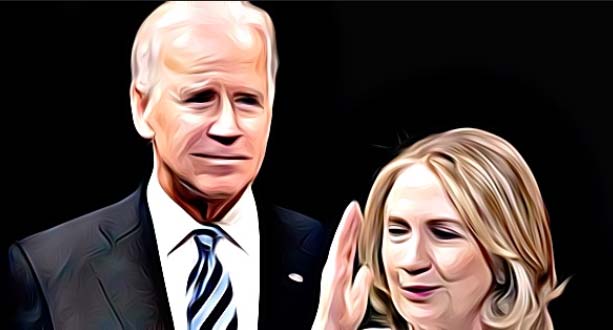 After Hillary Clinton dropped in on the nation's capital the other day to say a few kind words on behalf of Harry Reid, the exiting Senate Minority Leader, two things stood out.

First, Clinton couldn't resist going to the dark side, symptomatic of Democrats these days.

She started her remarks by making a joke about the oddness of the situation ("This is not exactly the speech at the Capitol I hoped to be giving after the election. But after a few weeks of taking selfies in the woods, I thought it would be a good idea to come out.").

But then she lamented a self-perceived "epidemic" of fake news - "boob bait for Bubba", as Daniel Patrick Moynihan liked to say about welfare reform, for her fellow Democrats convinced that a larger conspiracy, not a lack of transcending message or blue-collar appeal in noncoastal states, took down their candidate.

The other takeaway: the party of Clinton and Reid, et.al. has an age problem.

Speaking in the Russell Senate Office Building's Kennedy Caucus Room (named after the three brothers who served in the chamber, two of whom (Jack and Bobby) declared for the presidency in said room), Hillary noted that Reid traces his political career back to organizing for JFK in 1960. And she added that the room was the site of Watergate hearings of 43 years ago, where she got her first taste of Washington blood sport.

That's lovely nostalgia on a day when a guy who's served in Congress since Ronald Reagan's first midterm election was bidding adieu.

It also coincided with the death of John Glenn - maybe the last of the great New Frontiersman of the early 1960â€˛s and a Democratic presidential hopeful in the first election (1984) after Reid came to Washington.

And it came just a couple of days after the nation's 74-year-old Vice President went into "Crazy Uncle Joe" mode and left the door open to a presidential run in 2020 (Joe Biden first arrived in Washington the same year as those Senate Watergate hearings).

Lest you think this is solely a Senate problem; take a gander over at the House of Representatives. The top three House Democratic leaders on that side of Capitol Hill - Nancy Pelosi, Steny Hoyer and Jim Clyburn - are ages 76, 77 and 76, respectively. Combined age of that trio: 229 years. Age of the American republic: 240 years.

This isn't a good thing for a party that reveres youth (JFK, Bill Clinton and Barack Obama all were in their 40's when elected). And it raises a question as to what comes next. Do the Democrats turn to another elderly icon (Bernie Sander turns 79 in 2020; Elizabeth Warren would be 71)? Does it continue the pattern, dating back to Bill Clinton, of going with a Boomer nominee (Tim Kane was born in 1958)? Or is it time for a Gen-Xer to take the reins (New Jersey Sen. Cory Booker was born in 1969).

It's similar to what Republicans experienced after the subsequent presidential losses of George H.W. Bush and Bob Dole in the 1990's. Both were World War veterans (born 11 months apart between 1923 and 1924); both were perceived as out of date with a changing post-Cold War electorate. Enter George W. Bush, a product of the first year of the post-war Baby Boom and preacher of a more empathetic "compassionate conservatism".

Ironically, even with Donald Trump's victory, Republicans are in much the same position as Democrats. Should Trump decide not to seek a second term in 2020, who steps up? If it's not another Boomer (Trump, like Bush 43, was born in 1946), does the GOP turn a Xer (Marco Rubio will be 49 come the next presidential election; Ted Cruz and Paul Ryan both 50)?

Call it the age-old question looming over the two parties? Can a Democratic Party without much in the way of net stock in the cupboard get younger in a hurry? If Republicans ended up going younger on the natural, is it a natural fit in a national election?