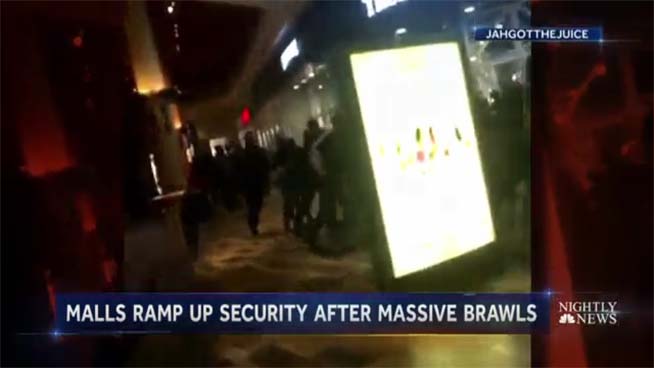 Judging by video evidence, the participants in the violent mall brawls over the Christmas weekend were overwhelmingly black teens, though white teens were also involved. The media have assiduously ignored this fact, of course, as they have for previous violent flash mob episodes. That disproportion has significance for the next administration's school-discipline policies, however. If Donald Trump wants to make schools safe again, he must rescind the Obama administration's diktats regarding classroom discipline, which are based on a fantasy version of reality that is having serious real-world consequences.

The Obama Justice and Education Departments have strong-armed schools across the country to all but eliminate the suspension and expulsion of insubordinate students. The reason? Because black students are disciplined at higher rates than whites. According to Washington bureaucrats, such disproportionate suspensions can mean only one thing: teachers and administrators are racist. The Obama administration rejects the proposition that black students are more likely to assault teachers or fight with other students in class. The so-called "school to prison" pipeline is a function of bias, not of behavior, they say.

This week's mall violence, which injured several police and security officers, is just the latest piece of evidence for how counterfactual that credo is. A routine complaint in police-community meetings in minority areas is that large groups of teens are fighting on corners. Residents of the South Bronx's 41st Precinct complained repeatedly to the precinct commander in a June 2015 meeting about such street disorder. "There's too much fighting," one woman said. "There was more than 100 kids the other day; they beat on a girl about 14 years old." In April 2016, a 17-year-old girl in Coney Island, Brooklyn, Ta'Jae Warner, tried to protect her brother from a group of girls gathered outside her apartment building who were threatening to kill him; one of the group knocked her unconscious. She died four days later. At a meeting in the 23rd Precinct in East Harlem in 2015, residents asked why the police hadn't stopped a recent stampede of youth down Third Avenue. In April 2012, a group of teens stomped a gang rival to death in a Bronx housing project.

The idea that such street behavior does not have a classroom counterpart is ludicrous. Black males between the ages of 14 and 17 commit homicide at ten times the rate of white and Hispanic males of the same age. The lack of socialization that produces such a vast disparity in murder rates, as well as less lethal street violence, inevitably will show up in classroom behavior. Teens who react to a perceived insult on social media by trying to shoot the offender are not likely to restrain themselves in the classroom if they feel "disrespected" by a teacher or fellow students. Interviews with teachers confirm the proposition that children from communities with high rates of family breakdown bring vast amounts of disruptive anger to school, especially girls. It is no surprise that several of the Christmas riots began with fights between girls. School officials in urban areas across the country set up security corridors manned by police officers at school dismissal times to avoid gang shootings. And yet, the Obama administration would have us believe that in the classroom, black students are no more likely to disrupt order than white students. Equally preposterous is the claim that teachers and administrators are bigots. There is no more liberal a profession than teaching; education schools are one long indoctrination in white-privilege theory. And yet when these social-justice warriors get in the classroom, according to the Obama civil rights lawyers, they start wielding invidious double standards in discipline.

The best solution to such alleged teacher racism, according to the Obama Justice and Education Departments, is to pressure teachers to keep unruly students in the classroom rather than removing them. This movement goes by the name of "restorative justice;" its result has been anarchy, adding a school-to-hospital pipeline to the school-to-prison pipeline. The St. Paul school district has been in the restorative-justice vanguard. Assaults on teachers tripled in 2015, reports Katherine Kersten of the Center for the American Experiment; one teacher sustained a traumatic brain injury, while another required staples in her head. Melees of 40 to 50 people (resembling the mall violence) are common, according to Kersten; roving packs of students attack isolated individuals. One high school issued emergency whistles to teachers. (Kersten has a full-length feature story on the St. Paul schools in City Journal's upcoming issue.)

Over the last year, a Seattle school district in the throes of "restorative justice" experienced an alleged gang rape and several student deaths. Criminal charges, including murder, were filed against a group of students not yet out of middle school, reports the Seattle Times. Teachers' unions in Fresno, Des Moines, New York City, and Indianapolis have all lodged complaints about the anti-discipline philosophy, according to Education Week. The Fresno teachers signed a petition pointing out that students are returned to class after cursing at teachers and physically assaulting them, without suffering any consequences. Fresno's teachers have been injured trying to stop fights; some are retiring because teaching where severely disruptive students cannot be dislodged has become impossible. In Des Moines, students now hit and scream at each other and their teachers, reports the Des Moines Register.

Undeterred by such news, the Obama administration has rolled out reams of material for combatting supposed teacher racism. Since 2014 alone, it has produced a School Climate and Discipline Guidance Package, a Rethink Discipline Public Awareness Campaign, a Resource Guide for Superintendent Action, a National Resource Center for School Justice Partnerships, a template for "School Climate Surveys," and a "Quick Guide on Making School Climate Improvements." The DOJ is "investing" $1 million (read: showering money on left-wing consultants) for the Pyramid Equity Project, which is supposed to establish national models for addressing issues of implicit bias in early learning programs.

Naturally, federal litigation has followed. Just this month, the Justice Department's Civil Rights Division imposed a consent decree on the Watson Chapel, Arkansas, School District, after suing it for racially discriminatory school-discipline practices. Those practices "prevent students of color from reaching their full potential," according to Principal Deputy Assistant Attorney General Vanita Gupta. A federal court will continue to have jurisdiction over the school until the DOJ declares it in absolute compliance with the decree, a process anticipated to take three years.

Given this threat of lawsuits, it's no wonder that district superintendents dismiss the rising violence and announce that restorative justice is "working." It's certainly "worked" to reduce expulsions and suspensions-in Seattle, by a whopping 77 percent from 2013 to 2016. Never mind that students aren't learning and teachers are at risk.

The Trump administration must tear up every guidance and mandate in the Justice and Education Departments that penalize school districts for disproportionate rates of school discipline. Absent clear proof of teacher or administrator racism, Washington should let schools correct student behavioral problems as they see fit. Students in classrooms where disruption is common are far less likely to learn; that is the civil rights problem that should get activists' attention. Taxpayer dollars should not be funding specious federal crusades against phantom discrimination; school districts might have more resources if their local taxpayers were not also being hit by federal levies, which are redistributed around the country in the delusional pursuit of "social justice." Until the two-parent family is reconstructed, classrooms remain the only hope for socializing children and for preventing the teen violence that broke out across the country this Christmas. Schools can only accomplish that civilizing mission, however, if they are allowed to insist on strict rules, respect for authority, and consequences for misconduct.