Kerry yearns for peace in a vanished Middle East 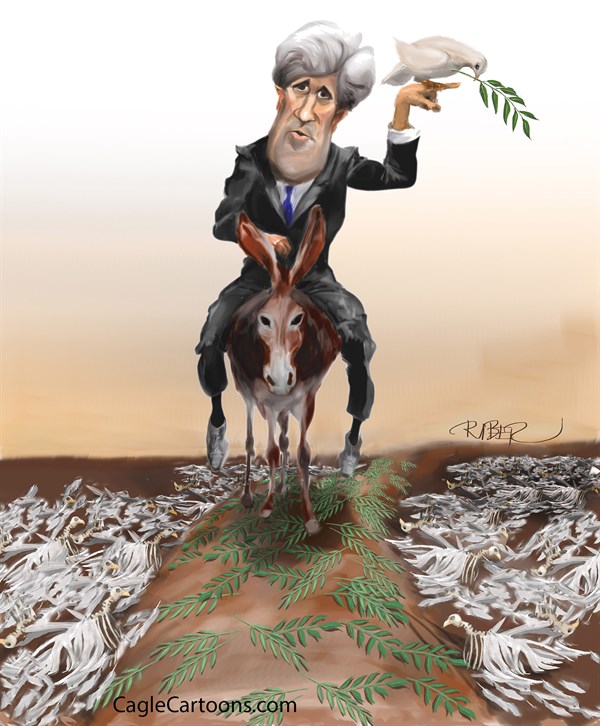 On the surface, Secretary of State John Kerry's speech on Wednesday about the Israeli-Palestinian conflict was an act of liberation. With three weeks left in office he is finally telling it like it is. Israel's current government is "driven by its most extreme elements." Palestinian leaders are "naming public squares, streets and schools after terrorists."

No longer bound by official restraints, Kerry said things in public that U.S. diplomats usually say only behind closed doors.

But Kerry's speech in a deeper sense was that of a man trapped in the past. Like Republicans and Democrats since the Oslo Accord of the 1990s, Kerry is a prisoner of a peace process from a bygone time.

In this respect he is not alone. Since George H.W. Bush, U.S. presidents have pushed and prodded the two sides to agree that there should be two states for two peoples. Kerry's speech hit familiar notes. Palestinians must end incitement. Israel must stop building settlements. Time is running out. Madeleine Albright, Bill Clinton's second secretary of state, could have given the same speech in 1999.

But 2016 is not 1999. In the 1990s and the 2000s, the Middle East had plenty of problems but its governments remained largely in charge, even after the 2003 invasion of Iraq. Back then the establishment view was that a two-state solution was the key to unlocking stability for the region. The late Israeli leader Shimon Peres used to call this the "new Middle East," where collaboration replaced conflict. Arab allies would finally cooperate with the U.S. if the Palestinians and Israelis could just share Jerusalem.

Nobody believes this anymore. Today the Middle East is coming unglued. Syria is no longer much of a state at all. Wars rage in Iraq, Libya and Yemen. Iran is meddling. Russia has entered the region for the first time since the 1970s. The jihadist Islamic State has suffered setbacks but it still has its caliphate in Raqqa. These conflicts are complex, but they have nothing to do with settlements in the West Bank.

So why are Kerry and his boss, President Barack Obama, following the old playbook? They say they are driven by a desire to preserve the prospect of peace when the two sides come to their senses. The main threat to a two-state solution, they say, is the expansion of settlements. The Jewish state is gobbling up land that is supposed to be preserved for the Palestinians. Israel's Knesset is on the verge of legalizing what were once illegal outposts.

"If more and more settlers are moving into the middle of Palestinian areas, it's going to be just that much harder to separate, that much harder to imagine transferring sovereignty, and that is exactly the outcome that some are purposefully accelerating," Kerry said.

This is true. But Israel has dismantled settlements before. It did so in 2005 in Gaza. At the time, the George W. Bush administration committed in return to acknowledge that some of the population centers in and around Jerusalem would remain in Israel if a two-state solution could be reached.

Obama, as I wrote earlier this week, abandoned this promise in his first year in office. The U.N. Security Council resolution that the U.S. allowed to pass on Friday says that all of East Jerusalem is now occupied territory. Why would Israel trust the U.S. to keep its commitments after Obama discarded those made by his predecessor?

This will be Donald Trump's problem in less than a month. For now, it's worth marveling at the spectacle of Kerry's dire warnings about the survival of a peace process disconnected from the wars raging all around it.