A deeper look at how blue-collar towns turned red 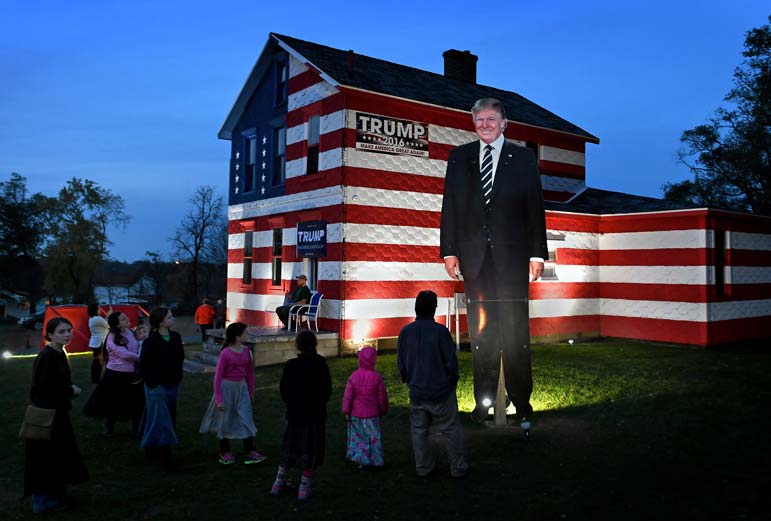 MADISON, Wisc. - Democrats continue to digest last month's election results and probably will do so for months to come. The devastation of losing a presidential contest most Democrats thought they would win has been compounded by the decimation of the party at all levels that has occurred since President Barack Obama was first elected.

Advisers to Hillary Clinton have noted, correctly, that in an election that turned on a relatively few number of votes in a handful of Northern industrial states, there are many possible answers, all with some validity, for why she lost. They include strategic or tactical mistakes by Clinton's campaign, Clinton's weaknesses as a candidate, the resistance to a female candidate for president among some voters, President-elect Donald Trump's shrewdly opportunistic campaign and nefarious activity by the Russians.

The Obama administration will seek to understand more about the role the Russians played in the U.S. election even as Trump tries to bat away information suggesting that he benefited from foreign intrusion. Knowing more about exactly what the Russians did is of critical importance. But Democrats ought not to believe that their problems have been caused primarily by the actions of a foreign government. There's too much other evidence that they have lost touch with parts of the electorate and will need to take stock as they begin to try to regain ground.

As much as anything, the 2016 election highlighted the degree to which Democrats have lost favor among voters in rural and small-town America. Heading toward Election Day, Democrats dismissed the possibility that there were enough white, working-class voters in these nonurban areas to overcome their advantages with African Americans, Latinos, unmarried women and highly educated voters.

The election proved them wrong.

Wisconsin, Michigan and Pennsylvania broke the back of the Clinton campaign, but her margins of defeat were even larger in neighboring Ohio and Iowa. The pattern of Trump's vote in these states shows how effective his crosscutting message proved to be in the final weeks of the campaign and the degree of resistance to the Democrats' message.

Wisconsin has seen close elections in the past. George W. Bush lost the state by less than a point in both 2000 and 2004. Obama won it by almost 14 points in 2008 and by about seven points in 2012. Trump won the state by seven-tenths of a percentage point.

Craig Gilbert of the Milwaukee Journal-Sentinel recently provided the first groundbreaking analysis of how Wisconsin voted. What he found was an uneven pattern, with Trump significantly outperforming Mitt Romney in some areas and underperforming in others. Trump did worse in areas of greater affluence and higher levels of education, particularly around Milwaukee. But he did dramatically better in smaller, blue-collar communities.

As Gilbert wrote, Trump "won more than 500 cities, towns and villages that voted for Obama in 2012. He won 190 of them by at least 20 points. These 'Obama-Trump communities' were located overwhelmingly in northern, western and central Wisconsin. Their median population was less than 800."

Gilbert added that Trump's gains in these smaller communities were so dramatic that he overcame the deficiencies around Milwaukee. "If you add up all the communities in Wisconsin of less than 2,000 people," he wrote, "Trump won them collectively by 24 points and nearly 150,000 votes. Romney won those same communities by 4 points and fewer than 30,000 votes."

Ohio turned out not to be close in 2016, in large part because a similar pattern turned a historically competitive battleground into a rout for the Republican nominee. Trump won Ohio by eight points, compared with a three-point victory by Obama in 2012.

An analysis by Mike Dawson, an expert on Ohio election statistics, showed that Trump's margin was at least 10 points better than Romney's in 41 of the state's 88 counties. Overall, he ran about even with Romney in two counties and behind in four counties, including Franklin (Columbus), Hamilton (Cincinnati) and Delaware (suburban Columbus). Trump's biggest gains came in Ohio's Appalachian counties, where he ran 12 points ahead of Romney.

David Pepper, the Ohio Democratic chair, said Trump's message on trade penetrated in communities that went into decline years ago, some of which had consistently voted Democratic in presidential races. "His message was so clear he tapped into something that was bigger than the Republican Party," Pepper said. "It's why swing counties went red and why red counties went redder and blue counties were not as good [for Clinton] as they needed to be."

Democrats have sometimes assumed that they don't need to do much to appeal to voters in these communities, assuming that they represent a shrinking portion of the electorate. Today they are wondering how they can appeal to them more effectively.

On Friday, the University of Wisconsin's Elections Research Center held a symposium analyzing the 2016 election. Among the many thoughtful presenters was Katherine Cramer, a political-science professor at the university's Madison campus.

Cramer spent years traveling to small Wisconsin towns, talking with citizens about politics, government and other topics. The research produced a book, published earlier this year, called "The Politics of Resentment: Rural Consciousness in Wisconsin and the rise of Scott Walker."

Not surprisingly, Cramer has been in high demand as journalists and others seek to better understand Trump's success in appealing to voters in these parts of the country. During her presentation Friday, she was asked what Democrats could do to reach these voters. As the questioner put it: What could the Democrats to do speak to these voters more directly?

"I would say it's not speaking to people," she said. If Democrats want to do better with these voters, she said, it would require spending time with them and asking them what's on their minds and then listening to their answers. Only then can they try to deliver a message. "There's so much respect that has to be conveyed to people before they start listening to the message," Cramer added.

Cramer noted that the people with whom she has been interacting for nearly a decade were particularly drawn to two elements of Trump's message. Because they feel disrespected by the urban areas of the state and feel disconnected from government, Trump's message of division - whether "birtherism" or "build the wall" - resonated, as did his call for dramatic change - his message to "drain the swamp."

She also said that her post-election interviews in some of these communities revealed a significant lack of confidence that Trump would actually change the lives of people living there. That's the challenge ahead for the president-elect as he takes office. There are no easy policy ideas to revitalize the economies of these communities.

For the Democrats, it's a bigger challenge of trying to gain back a share of those voters, in part because they represented the margin of defeat in 2016. The party historically has stood for working people but has seen that connection eroded, if not shattered. As Cramer suggested, there will be no quick fixes for the Democrats on that question.