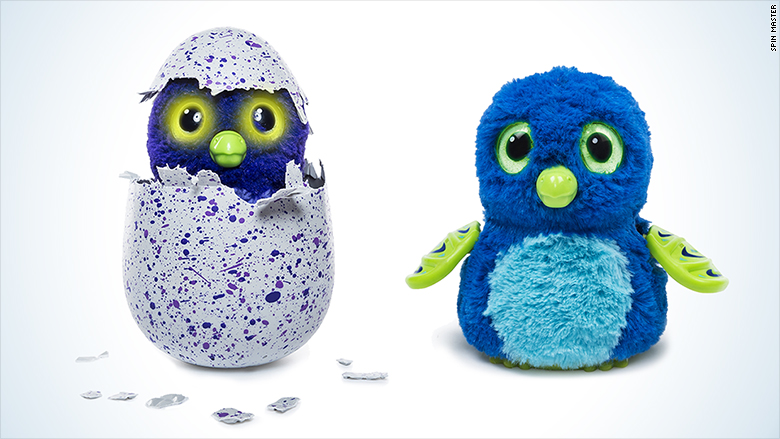 Forget the election. America is split by something far more divisive:

Those who have Hatchimals and those who don't.

If you don't know what a Hatchimal is, you are 1) in the second category and 2) very fortunate. Just ask any parent with a young child, if you can flag one down during the mad dashes to Toys R Us.

These poor adults, with young, impressionable children, have been nudged, reminded, begged, pleaded - maybe even threatened - that if a Hatchimal isn't under the Christmas tree, the tears are gonna flow like the mighty Mississippi.

Which is why all over America - and, as I can attest, the world - parents are racing to toy stores like gold-rushers with an empty pan, all on the slightest whisper that "a shipment might be coming."

Not that anything arrives. I'm convinced they made only four actual Hatchimals, used them all in one commercial, and now watch hysterically at the fools who think they can really own one.

For those blissfully out of the loop, a Hatchimal, which lists for around $60, starts inside a box as a large, colorful egg. With proper "care" by the new owner - meaning a child, who hugs, rubs or waves the egg around - the thing actually "hatches" after 10 to 40 minutes. I suppose it would happen sooner if you threw the egg against a wall, but that would be a parent's doing, and as we all know, by Christmas morning, parents are asleep on the couch with the camcorder running.

This leaves the amazed child to watch the shell actually break, as a creature pecks its way out singing "Hatchy Birthday." Next thing you know, the family has a new furry member that will require love, care, and, down the pike, four years of college tuition.

(By the way, isn't it funny that many "obsession" toys mimic some form of child-rearing, since by the time Mom and Dad finish chasing down the darn thing, a new baby is the furthest thing from their minds?)

We had a hint that Hatchimals would be a hot Christmas item. In November, its manufacturer, a Canadian company called Spin Master, warned that there might be a shortage. That's like shooting a flaming arrow into a stick pile.

Next thing you knew, the only place you could find a Hatchimal was online, at prices two, five, even 10 times the original. A couple of brothers in Arizona spent $5,000 scooping up 100 Hatchimals in October. They told CNN they've well exceeded their investment by putting some on eBay and letting bidders go crazy.

"What we are doing," one of them told the network, "is capitalism at its best."

And they say Americans don't want to work.

But lest you think this is a national craziness, I can tell you otherwise. For the past week, I have been in Cologne, Germany, with a 6-year-old Haitian girl who we are looking after. And even though she watches no TV shows and her English is limited, she already knows the word "Hatchimals" - and desperately wants one.

So, I thought, this could actually work out. Here I am in a different country with different commercials, different tastes. Maybe in Germany, Hatchimals are stuffed on a low shelf with a "clearance" tag.

I went to the biggest department store in Cologne, and when I inquired if it stocked Hatchimals, the reply was a hearty laugh and a German-tinged, "Ah, you won't find any of those before Christmas!"

Apparently, this shortage extends around the world. In New Zealand they are reselling these things like contraband. And New Zealand is just getting cable TV.

But, hey, it's not the effort that frustrates. It's the knowledge that, by next Christmas, this fury will be over, and the Hatchimal will occupy a closet with the Furby, the Tamagotchi and the Cabbage Patch Kid, while a new must-have toy will send mothers racing in their sweats to beat the crowd to the sunrise door opening.

Or overpaying a couple of brothers on eBay.

It all gets filed under "things we do for our kids," a holiday tradition as old as eggnog.

But it gives me an idea.

I think all parents lucky enough to snag a Hatchimal this year should encourage their children to nurture the little creature. Show it lots of love and care. And next Christmas, when the season's must-have toy arrives, tell the new furry family member that the stores open at 7 and the keys are on the counter.