Why my Staten Island isn't Ferguson 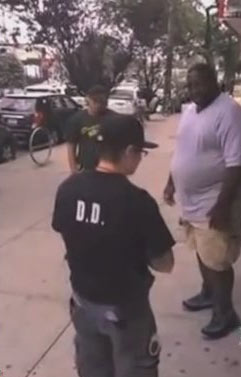 I didn't read the Eric Garner grand jury testimony so I don't know why the jurors came to what many will view as a shocking ruling.

Many here, myself included, thought that the officer who allegedly choked the bear of a man who resisted arrest would be charged with homicide or, at the very least, negligence.

After the news broke that he wouldn't be, I started receiving emails and calls from family. They were worried that Staten Island would erupt in violence.

I happen to live in the North Shore part of Staten Island, where Eric Garner died. I'm also very close to the housing project that once harbored two cop killers. I do not, however, expect the same type of lawless behavior that we witnessed in Missouri. Staten Island is, after all, the most conservative borough of New York City. Many police officers, firefighters and gun owners, not to mention alleged Mafia-run businesses, call it home.

If there is violence it will come from another borough, but here's hoping there is none.

I remember when Al Sharpton paid us a visit this summer. He planned to cross the Verrazano Bridge and tie up traffic. Instead he was forced to have a relatively calm gathering in St. George near Borough Hall.

I can only speculate on what made the Grand Jury decide not to indict the officer who allegedly forced Eric Garner to the ground in a choke hold which is no longer permitted in the NYPD. Upon closer examination of the video, the officer Daniel Pantaleo performs another maneuver which is similar to harnessing a seat belt and which is approved protocol for someone resisting arrest.

Staten Island has a very diverse community and the majority here is made up of hard working individuals of all ethnic groups. There are several African nations represented here from Liberia, Sierra Leone and Nigeria. They are all very industrious and entrepreneurial and rioting and looting would be counterproductive to their economic lives. We also have a large Hispanic and Asian community from every corner of the globe and according to the last census Staten Island is still predominantly white (64%). I wasn't being facetious about the Mafia comment as I had that confirmed from a former family member circa the Donnie Brasco era.

Considering that the media has done an awful job of covering Ferguson and the aftermath of the non-indictment of Officer Darren Wilson, one can expect them to encourage the usual gang of race demagogues like Sharpton and Jackson to wend their way to my neighborhood, stirring up violence and lining their pockets with the proceeds of their chicanery.

As I write this, I am waiting to hear the multitudinous police and fire truck sirens and bull horns from the NYPD urging calm but so far it is quiet. I see the truck lights flashing at the nearby fire station but so far it's not going anywhere. Maybe it's the bad weather keeping the hordes at bay but I hope it's because here on Staten Island the population is more steadfast and most have jobs.

Most of us feel compassion and sorrow for Eric Garner's family and I am just as perplexed by the outcome of the Grand Jury. I am encouraged by their statements that far from inciting violence like Michael Brown's relatives, they are simply expressing their sorrow, disappointment and shock. There will probably be legal recourses that they can pursue and I expect them to take them. There is definite evidence that the NYPD and EMT were negligent in responding to Mr. Garner's medical emergency. There are idiot cops on Staten Island but most of them do the best they can do in preserving the Island's reputation for safety and low crime.

I am very familiar with the S.I. District Attorney Dan Donovan, who is very well liked in the minority communities. He is very fair minded and this must have been a trying period in his career but if there was testimony proving that Officer Pantaleo performed his job as he was trained then he can not be criminally indicted. Now it will be up to the attorneys to pursue further action for the Garner family.

Hopefully that will come without the looting and shameful actions of the Ferguson community.