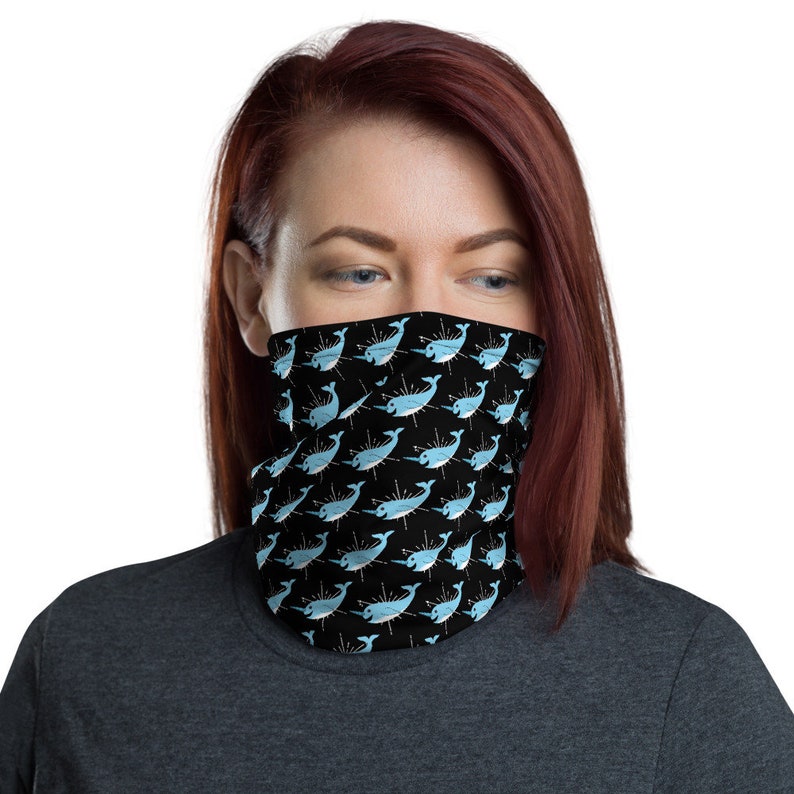 The whales with spiraled tusks jutting from their heads have been known to live in small groups that, at times, come together to form large pods.

In that way, they are not unlike humans during the holidays.

That alone would have made the name Narwall Mask fitting for the product Alex Rattray invented and publicly launched this week. When the Baltimore resident first started creating the full-face mask based on snorkeling gear, he held hopes it would bring people together during a pandemic that was forcing them apart.

But the decision to name the creation after the "unicorn of the sea" came down to other reasons.

"We liked the reference to an aquatic hero with something sticking out of its head, equipped to fend off assailants," says an explanation on the newly created website for the mask. It goes on to say that the name of the animal was then tweaked to reflect that the mask offers a "barrier (err, wall)" as protection. "We know. We're nerds."

Rattray, more specifically, is a 28-year-old "nerd," in the best sense of that word, who has known since high school that he wanted to create something that didn't exist before.

As a teenager, he did that through starting an underground newspaper and designing signage aimed at encouraging people to help the environment.

After college, he did that by working as a software engineer, using computer programming to solve problems for people.

Then came the pandemic - and, after months of work, Rattray was left holding a mask that would have seemed ridiculous a year ago but has tapped into the strangeness of this moment. If there is one object that captures the uniqueness of this 2020 holiday season, and the angst it is causing for so many of us, it has to be a mask that has a protruding blowhole out the top.

Even before the product officially went on sale Tuesday, and orders started coming in, dozens of the masks had been sold through word of mouth. Rattray and others who had been working on it told friends, who then told friends, and so on.

People who had seen Rattray wearing it had asked about it. One of the first times he put it on came after his father ended up hospitalized in Seattle. Rattray says he took a coronavirus test to makes sure he hadn't been exposed and then wore the mask throughout the plane trip to guard against catching anything while traveling.

Since that trip, he says, he has worn the mask more than 100 times and can recall only one person laughing at him. That surprises him. He expected more people to do so. He knows the mask looks odd.

"It's honestly very heartening," he says. "You hear all these stories of anti-maskers, but I've worn this mask in rural areas, and people just recognize it's protective, and they appreciate that."

I have not tried the mask, so I can't attest to how well it fits or works. The website for it offers information for people to discern for themselves whether it's worth getting. But what struck me about it, and the reason I reached out to Rattray, is what the mask says about us at this moment. Its existence strikes at two conflicting urges - wanting to see the vulnerable people in our lives and wanting to keep them safe - that have pulled at so many of us during this pandemic and now feel amplified as the holidays approach.

I don't recall at what point during the pandemic that I learned my mother, a three-time cancer survivor, had wrapped herself in garbage bags just to hug my brother, who is an essential worker. But that image will long remain with me.

So, too, will the asides my dad now slips into our phone conversations about how he wants his collection of antique toys and other objects to go to my children and their cousins when he's gone.

Those are the things that make me, more than ever, want to get on a plane and head toward them, as I've done almost every year during the holidays. Those are also the things that keep me from doing so. I want them both to remain healthy until we can hug without plastic between us.

If the last year has shown us anything, it's that we aren't doing enough collectively to protect the people most vulnerable to the virus.

In April, I wrote about a home-health-care worker who was taking care of a man with intellectual disabilities who had tested positive for the coronavirus. That worker was left spraying Lysol daily on a set of masks and gowns he was forced to reuse.

On Wednesday, a powerful piece by my Washington Post colleague Jessica Contrera showed how caregivers at a Virginia group home for disabled women were counting on a stash of Clorox wipes to keep the staff and residents safe. Contrera describes the workers' shameful lack of supplies in this way: "They had no N95 masks, only KN95s, the less-reliable Chinese-made filtering masks that didn't fit as tightly. They had so few gowns that the caregivers would eventually wear 55-gallon garbage bags instead."

As Rattray tells it, the idea for his mask grew out of the desire to provide a safer way for individuals to interact with people in their lives who have health vulnerabilities. He describes sheltering in place early on in the pandemic with a friend who has an autoimmune deficiency and lung disorder.

"Everyone in the house was really, really worried," he says. "We were stocked up on groceries and trying not to go out at all."

The Centers for Disease Control and Prevention had recommended people not wear N95 masks because those were needed for health-care workers. "But cloth masks didn't feel like adequate protection for us," he says. "For us, I really wanted something that was outside the medical supply chain that would offer a complete level of protection."

On April 12, Rattray ordered his first full-face snorkel mask online to study the mechanics of it, and by the end of that month he had purchased a half-dozen more. He had been working as a software engineer for a company in California but left that job in April. In May, he moved to Baltimore because his significant other started a medical residency at Johns Hopkins Hospital.

There, he continued to work on the mask and eventually hired an industrial engineer to help him. Rattray says he invested his own money into the project but doesn't expect a windfall in return. Each mask sells for about $85. He is also hoping, like the rest of us, that a coronavirus vaccine will be made widely available soon.

"For me, it's a win for this to be a break-even project that helps a lot of people," he says.

Already, he is hearing about some of the ways it is doing that.

One man wears his mask to his once-a-week medical appointments. Others have put theirs on to take flights they might not have otherwise. And Rattray knows of at least one customer, his cousin, who was going to have to pass up seeing his parents for the holidays but now plans to use the mask to travel home from law school.

When I ask to see some of the messages he has been receiving, Rattray shares a text exchange on his phone with me. A photo shows a young boy sitting on a stoop, looking sad because he couldn't see his grandparents up close. Then, in another photo, the boy sits in a wagon as his grandfather, in his mask, pulls him along.

"This was our first time being near our youngest grandson and playing with him since March," says the text.

The person goes on to write that they can't yet kiss him, but at least they can be close to him.

Previously:
• At a place where memories are fleeting, some powerful ones are being made through a glass door
• Understanding a Muslim immigrant's vote for Trump
• Trump adviser Stephen Miller cleans CNN reporter's clock