These Dem presidential candidates could be the next political casualties 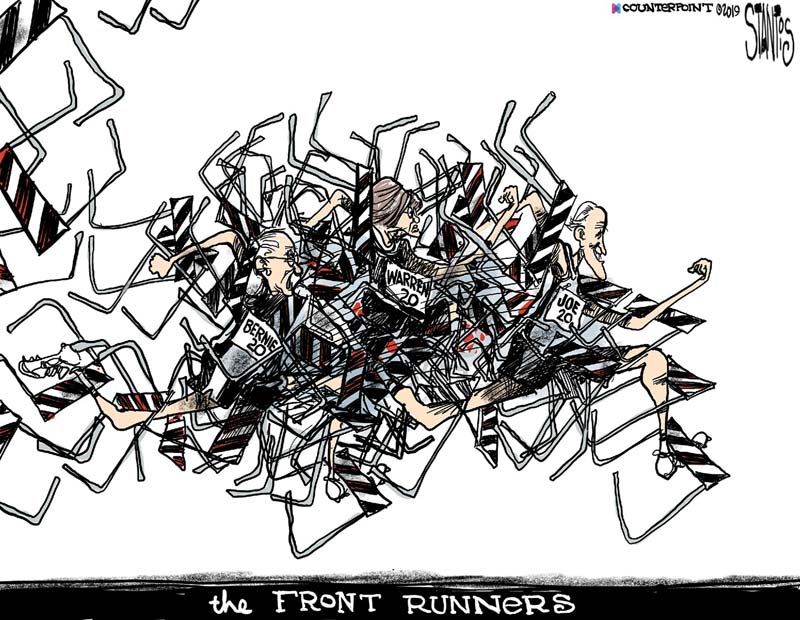 The best time of any political campaign is announcement day, so full of sunny promise, hope, optimism and certain success.

Candidates will have good days, bad days and very bad days. But after day one, basically, it's all downhill for almost everyone running, with the speed of decline dependent on many factors including money, luck, media coverage, candidate skills and did we mention money?

And now, with three months until primary voting begins in the Democratic field and 12 until the real Election Day, Judgment Day looms for some big-name contenders.

We're now at the stage where financial and political realities crush the hopes of more. The pace of casualties will increase. Already a third of the overweight field has given up. Most recently, it was Ohio Rep. Tim Ryan. Soon, it will be Julian Castro, among others, then likely Sens. Kamala Harris and Cory Booker.

And of course, Robert Francis O'Rourke, who famously proclaimed he was "born to be in it." But last week, Beto aborted his effort just seven months in. It is, he said, "clear to me now that this campaign does not have the means to move forward successfully."

"Means" means money. He ran out. While $10 million and even $5 million seem like sizable chunks of change to normal people, it's lunch money in today's politics. That's especially true when every quarter, your competitors on the left are pulling in $25 million (Bernie Sanders), $24 million (Elizabeth Warren) and $19 million (Pete Buttigieg). Or in the case of President Donald Trump's campaign, $125 million.

Here's a sign of campaign money problems: You boast about not taking money from super PACs because, as every Democrat claims, they're quite evil, unless you want to win. But after a poor quarter of fundraising (Joe Biden collected $15 million, down 20% from spring), his mind got changed.

As the ex-vice president builds out a national campaign with some 200 new hires, he's spending way more money than he's taking in, which might be OK short-term.

But the more time he spends tapping the checkbooks of liberal Los Angeles and San Francisco, the less time he has to campaign where it matters. Oh, look! While Biden's national poll numbers still lead the field, they're crumbling in states. He's dropped to third in both Iowa and New Hampshire.

Now, here's a sign of a campaign's terminal illness: Candidates announce with great enthusiasm that due to the importance of Iowa and its wonderful, warm Heartlanders, they are forsaking everywhere else to devote themselves full-time to the Hawkeye state.


Remember in 2007, Sen. Chris Dodd up and moved his entire family from Connecticut to wintry Des Moines because he wanted to spend more time with those wonderful people? Dodd finished sixth there that year.

Booker, the former mayor of Newark, N.J., is also focused solely on Iowa now, claiming that was his plan all along. Like others who attempt this gamble, he's hoping a 2% poll standing will suddenly explode on Feb. 3, rocketing him into New Hampshire eight days later.

Then, there's Harris, another coastal liberal importing herself to corn and hog country. A native of Oakland who became San Francisco's district attorney and then California's attorney general, Harris entered the Senate in 2017.

When she announced her White House bid in January, some thought the personable newcomer could be a female Barack Obama, a fresh face of color from a Democrat-dominant state with a short federal resume and abundant ambition.

Besides launching an early debate attack on Biden, Harris has been both a campaign flop and a flip-flopper, advocating very liberal positions one day, toning them down the next. In stark contrast to Warren, who has an expensive plan for everything, Harris suffers from the Hillarys, an inability to articulate compelling reasons for running.

In July, Harris was at 15% in the polls. Now, she's right down there with the bottom-feeding flounders in low single digits. Even in her home state of California, Harris runs fourth behind a mayor from Indiana, for Pete's sake.

As a result, she's just fired dozens of staffers and has abandoned New Hampshire to focus on G od wait for it G od Iowa. "We are going to end up in Iowa doing very well," she declared. That will take some doing. She's now in sixth place behind even Sen. Amy Klobuchar, while Oklahoma native Warren and Hoosier Buttigieg wrestle at the top.

For Harris, this is now at least the third campaign relaunch. She's portraying herself as a tough prosecutor who can oust the GOP incumbent, allegedly Democrats' fondest dream. "To win, we're going to need a nominee on that stageâ€¦who has the ability to go toe-to-toe with Donald Trump. And Iowa, you're looking at her."

Of course, hope springs eternal, even during prairie winters. In 1976, that notorious nobody Jimmy Carter surged out of Plains, Georgia, to win the caucuses and capture the White House from a controversial Republican president.