The Russian conspiracy that won't die 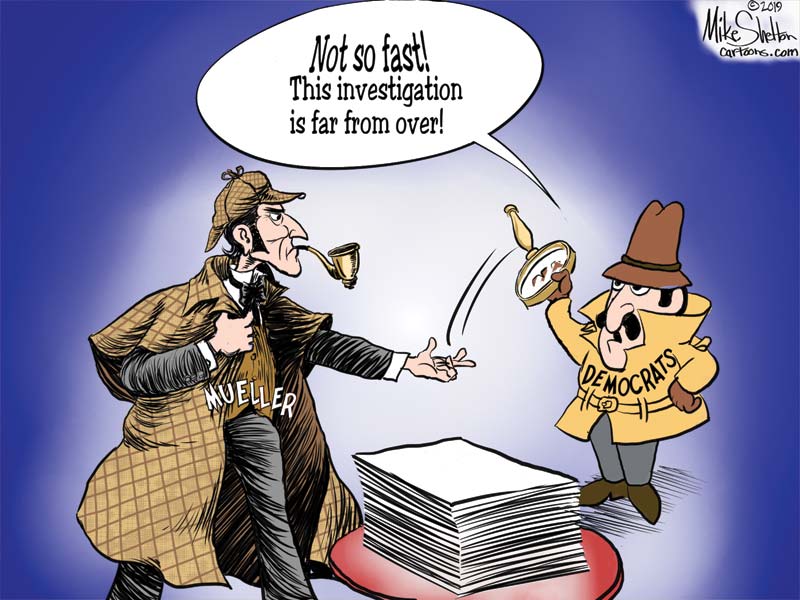 The Mueller report accomplished nothing.

Whether you thought that the two-year, $32 million investigation was warranted or not, the report promised to establish a factual record that both sides could accept, especially on the explosive charge that Donald Trump had conspired with the Russians to win the American presidency.

It did indeed establish such a record, at great length, after a formidable team of investigators and prosecutors searched high and low for evidence and got extensive cooperation from the White House (but only answers to written questions from President Trump).

The report explained at the outset that the investigation examined whether contacts between Russians and the Trump team "involved or resulted in coordination or a conspiracy with the Trump Campaign and Russia, including with respect to Russia providing assistance to the Campaign in exchange for any sort of favorable treatment in the future. Based on the available information, the investigation did not establish such coordination."

Case closed? No. For many on the left, it's as open as ever. For them, it's as if the Mueller probe never happened.

Nancy Pelosi still likes to say, "All roads lead to Putin." The allegation that Trump might be a Russian agent is still heard on cable TV. Hillary Clinton still thinks the Russians have compromising information on Trump. The notorious MSNBC analyst Malcolm Nance is still at it, claiming that the Russians have been surveilling Trump since his marriage to Ivana, a Czech, in 1977, and "they now own him."

The Mueller report is considered wanting because its findings were "based on the available information." What about all the unavailable information? The notion that there is some cache of incriminating evidence that Mueller and his team missed is hard to credit. This line of reasoning makes the charge that Trump is an agent of Russia essentially unfalsifiable, a classic characteristic of a conspiracy theory.

The fallback evidence for the Russia obsessives is that Trump is acting like a Russian agent. There's no doubt that Trump believes, absent political flak in this country, he and Vladimir Putin could cut some unspecified wondrous deal. But he's thought, at times, he could cut a deal with Kim Jong Un and the Taliban, too.

If Trump has disparaged NATO, he also tends to look askance at all international organizations as a rip-off. He's minimized or denied Russian meddling in the 2016 election, but almost certainly because he considers the focus on Russia a way to undermine the legitimacy of his victory (which, in part, it clearly is).

Seeing the Ukraine mess through the lens of Trump's alleged loyalty to Moscow also doesn't make sense. Trump has a dim view of Ukraine, although largely because he believes Ukrainians worked against him in 2016.

The bottom line is that Trump's Ukraine policy is more hawkish than President Barack Obama's. Trump's predecessor steadfastly refused to give lethal aid to Ukraine to defend itself from a Russian invasion. Trump has provided such aid. His underlying offense is delaying, for a matter of months, that aid before coughing it up. Why would Putin consider this approach preferable to Obama's, which denied Ukraine this help, not provisionally, not temporarily, but firmly as a matter of principle?

Another count against Trump is that his pullback from northeastern Syria boosts Russian influence in the country, although the Russians arrived in Syria in force during Obama's "red line" fiasco. If Trump is acting like a Russian agent, so did Obama, beginning with his then-secretary of state, Hillary Clinton, offering her Russian counterpart a misbegotten "reset" button.

It's not as though Trump's critics don't have plenty of unassailably factual material to work with. This doesn't offer, though, the same intrigue and emotional satisfaction of believing he's in a treacherous conspiracy with a foreign power. If only we had a federal investigation with lots of time and money to get to the bottom of it ...