From his perch up high at the hearings, with that long neck and those pursed lips, shouldn't Schiff have worn a black robe trimmed with fur? 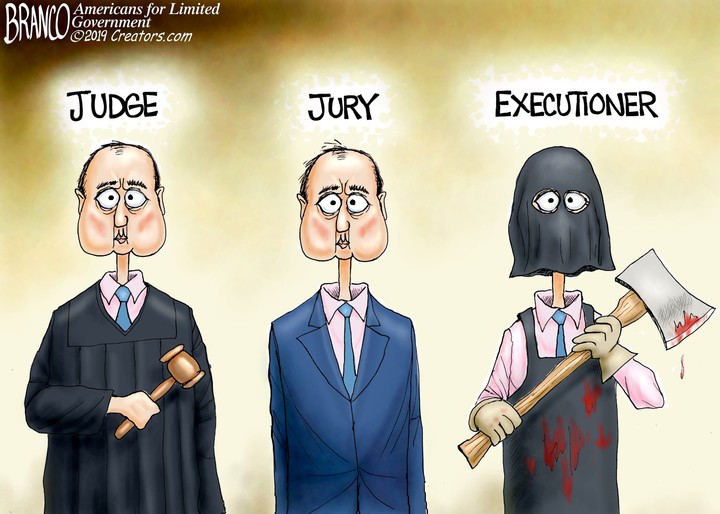 California Democrat Adam Schiff, the House Intelligence Committee chairman, has been in his glory in running the Trump impeachment hearings, with the TV spotlight upon him and his allies in Washington's Democratic Media Complex urging him on in this totally unnecessary farce.

Yet from his perch up high at the hearings, with that long neck and those pursed lips, I figure Schiff could have at least worn a black robe trimmed with fur. He presides over this absurdity like a medieval churchman in a bad movie, determined to burn all the witches and win the adoration of all those little people he finds beneath him.

Wasn't it only yesterday that House Speaker Nancy Pelosi thought going full impeachment on President Donald Trump was a political mistake? But now she's determined to take him down. And Lord High Inquisitor Schiff is indeed grateful. But what has this really accomplished?

It has already caused collateral damage to former Vice President Joe Biden, the moderate-left Democrat who once openly bragged on video about putting his thumbs on the scale of Ukrainian justice, while his son Hunter was doing questionable gas business in that famously corrupt country. Each day the Democrats pursue impeachment, Biden is weakened in the critical early states of Iowa and New Hampshire.

You think Schiff's impeachment hearings don't hurt Biden? OK, then please tell it to Michael Bloomberg, the big gulp New York billionaire who is moving into the Biden breach. Another is former Massachusetts Gov. Deval Patrick, an African American born on the South Side of Chicago. He wants to cut into Biden's last remaining firewall among African American voters in South Carolina. Patrick doesn't make this move without a wink and nod from Biden's beloved boss, former President Barack Obama.

What Impeachment Theater tells us is that Democratic moderates have been overwhelmed by the left, now the dynamic force in their party. This was inevitable. Years ago, the Republican establishment collapsed of its own weight after all those jobs were sent overseas, and all the needless wars that cost American blood and treasure.

The Bushies hoped to use Trump to suck up all the media oxygen, and then they'd slide in. They miscalculated. Trump was never the cause of the GOP establishment collapse, only the symptom of it. And now they hate him.

But back to Schiff and the farce in Washington. The hearings were full of Washington speak, the players mumbling what seemed like forgotten tongues about the sacred rights, feelings and prerogatives of federal bureaucrats who were irritated by the fact that they serve at the pleasure of a president many of them despise. Trump angrily tweeted at one diplomat who was there as a feeling witness, not a fact witness, but were Americans moved one way or another by the testimony? I don't think so.

The feelings of bureaucrats are important, yes. Feelings are intensely important to the left now, and tears are even better, especially on TV, since they'd rather not talk about the economy or of Democratic presidential candidates wanting to impose government health care and strip private insurance from union workers in critical battlegrounds like Pennsylvania, Ohio and Michigan.

The president sets foreign policy, not the unelected diplomats. Trump is accused of withholding aid to Ukraine unless Ukraine investigated the Bidens and reported Democratic intrigue in Ukraine running up to the 2016 election. Democrats now argue that this is bribery, and that foreign aid should not serve domestic political interest. But presidents always played it that way, with surrogates making end runs around the foreign policy bureaucracy in Washington.

Truman had his Marshall Plan to rebuild Europe. Billions of American dollars have been given to Egypt so it won't attack Israel. Obama gave millions of dollars in cash on pallets to Iran to sweeten the mullahs. One of his top foreign policy aides, Ben Rhodes, famously bragged to The New York Times about how easy it was to manipulate American journalists on the way to Obama's Iran nuclear deal.

Obama withheld anti-tank missiles promised to Ukraine. Why? Because he was president. He was elected to set foreign policy, even if that meant leaning over a hot mic in 2012 and telling Russian President Dmitry Medvedev to inform Russian boss Vladimir Putin that "after my election I have more flexibility." Was that smart? No.

Was it smart of Trump to call to the Ukrainian president and mention the Bidens? No. But he did it.

Is it impeachable? With an election less than a year away, is impeachment the orange hill that the Democrats should die upon? No.

Many of you will disagree. Many have and will offer reasonable counterarguments. Some of you might think the Schiff Show has been a valuable exercise in saving the republic just so that Elizabeth Warren, Bernie Sanders or the mayor of South Bend, Ind., can wreak their will upon it and upon the economy.

Trump's bombastic personality has been an issue from the moment he defeated the unlikable Hillary Clinton and sent the Washington establishment and their Beltway media palace guardians into absolute hysterics. They've been quite hysterical for three years.

You want to get rid of Donald Trump? You want to retain him? Here's what you do: Go to the polls next November and vote. That's how we do things.

It won't satisfy Adam Schiff, but then, he's always wanted to be a screenwriter. And he can write himself into another movie, and play the hero, once again.